London: King Charles and Princess Anne, the Princess Royal, were the only two senior members of the royal family who made it to Balmoral before Queen Elizabeth II’s death.

The Queen’s sudden demise saw her nearest and dearest make an eleventh hour dash to be by her side on Thursday. But only two of her four children were already in Scotland and managed to make it in time. 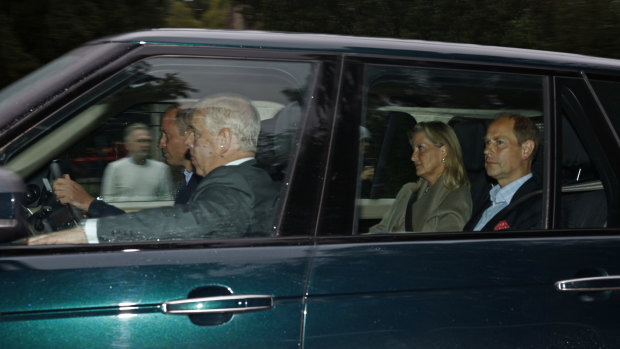 Charles and Camilla, the new Queen Consort, were at Dumfries House, his estate in East Ayrshire, when they got the call on Thursday morning London time and the Queen’s helicopter was scrambled.

Photographs showed Charles wearing a light grey suit and clutching a large briefcase as he walked from his official car to the helicopter.

The Princess Royal was already at Balmoral undertaking various engagements in Scotland and is understood to have greeted her brother on his arrival.

William drove the quartet from the airport to Balmoral and they were pictured sweeping into the gates of the castle shortly after 5pm.

It is possible they had known they would not make it, perhaps even before their plane took off. By the time they arrived, it was too late.

Prime Minister Liz Truss was informed of the Queen’s death at 4.30pm, according to her official spokesman.

Prince Harry, the Duke of Sussex, was also en route to Balmoral but travelling separately from other members of his family and was some time behind.

As such, he is believed to have been mid-air when Buckingham Palace announced at 6.30pm that the Queen had died, arriving at Balmoral about 1½ hours later.

Harry’s Cessna had been due to land at 6.29pm, a minute before the historic statement. But it was 20 minutes late taking off at London Luton Airport, meaning he did not land in Aberdeen, Scotland, until 6.46pm.

The grief-stricken Harry was photographed as he was driven into Balmoral Castle just before 8pm to join other members of his family. 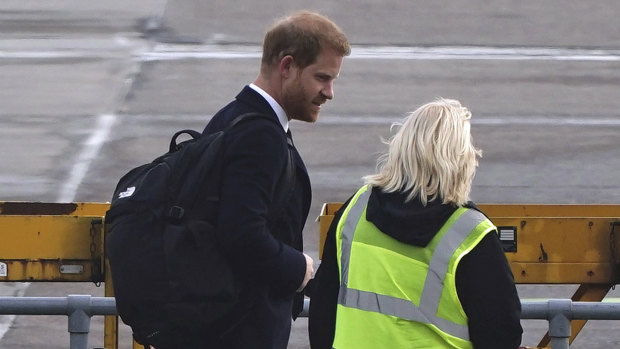 Prince Harry walks towards a plane at Aberdeen airport to travel back to London.Credit:PA

By the time he arrived, the homepage of his Archewell website had been blacked out, simply bearing the words: “In loving memory of Her Majesty Queen Elizabeth II 1926-2022”.

Harry was the first to leave Balmoral on Friday morning, driven out of the gates at 8.20am.

He later boarded a British Airways flight from Aberdeen to Heathrow and is thought to have returned to Frogmore Cottage, Windsor, where his wife Meghan, the Duchess of Sussex, was waiting for him.