‘Out of proportion’: Small businesses hit as COVID test wait times blow out

Long wait times on COVID-19 test results and a rising number of cases are triggering staff shortages and forcing small businesses to shut their doors during what would have otherwise been a bustling trading period.

Chiefs of the Australian Chamber of Commerce and Industry, the Australian Industry Group and the Council of Small Business Australia have called for rapid antigen testing to be ramped up to alleviate the blowout in PCR test waiting times, which is forcing some workers to isolate longer than necessary.

“Currently, businesses are waiting days for PCR tests to know if their workers are infectious. Workplaces need to have every tool available to them to avoid snap closures and reduce the risk to their employees, their customers and the community,” Chamber of Commerce chief executive Andrew McKellar said.

“Introducing free and accessible rapid testing to businesses will provide an additional line of defence to give businesses the certainty and confidence they desperately need, and ensures staff and customers are safe in the workplace.”

Victorian health authorities are considering giving more people access to free rapid antigen tests and letting those exposed to COVID-19 clear themselves from isolation with the tests.

Free rapid antigen tests are already available at state-run coronavirus testing sites for anyone who is declared a contact at a workplace, education or childcare centre.

Victorian Energy Minister Lily D’Ambrosio, speaking at a state press conference on Monday, said the possibility of making rapid testing free for everyone was “not an area that we can comment on, but those types of matters are under consideration by the Health Department”.

She said, on average, 84 per cent of people tested in the past week received their results within 24 hours.

“The overwhelming majority of Victorians can be confident … they can get their results back within 24 hours,” Ms D’Ambrosio said.

Some Victorians, however, have reported waits of up to five days to receive their COVID-19 test results. In a poll conducted by The Age on Monday morning, 43 per cent of about 1500 respondents said they received their coronavirus test results in less than 24 hours. 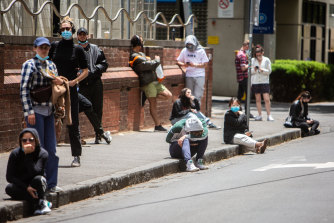 People queue for a COVID-19 test at St Vincent’s Hospital in Fitzroy on Monday.Credit:Scott McNaughton

Some PCR testing sites across Victoria were again at full capacity and temporarily closed within minutes of opening on Monday morning, at least nine sites were forced to close by about 7.20am.

By midday, 27 facilities were at capacity and closed but wait times were as low as 15 and 30 minutes at others, including Melbourne Showgrounds.

By the end of the day, Victoria had about 25 COVID testing centres over capacity, including the Alfred Hospital, Melbourne Town Hall and a drive-through testing site in Chadstone.

Australian Industry Group chief Innes Willcox said that with the PCR testing system under such strain, hesitancy to use rapid tests more was hard to comprehend.

“There is a clear risk that current reactions to the variant are not only out of proportion to the threat, they are blocking our vital testing resources at the time when we most need them to be working as effectively as possible.”

“What we’re hearing from people is that a fairly large number of those in the hospitality and events industries are making the decision not to open at this period of time at all,” she said. 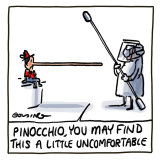 A single employee who worked a single shift could potentially trigger a complete two-week shutdown of the business, Ms Boyd said. Meanwhile, an employee waiting for their PCR results may be unable to work for several days as they await results.

“Everyone is experiencing [staff] shortages, big and small … every industry is screaming out for workers.”

“We’re seeing that in the UK, where large numbers of hospital staff have been furloughed because they’ve been contacts; particularly [because] a lot of them have younger children, and so they’ve been close contacts because their children have acquired it,” she said.

“It’s just one more thing that’s adding to the burden of the healthcare system over a time period where it’s pretty short-staffed anyway.”

Victoria’s COVID-19 response commander Jeroen Weimar said on Sunday there were not yet large numbers of healthcare workers in Victoria that were in COVID-19 isolation.

Burnet Institute epidemiologist Mike Toole said if a healthcare worker caught COVID out in the community before a hospital shift, it could lead to as many as 10 people being furloughed as close contacts.

“If they get infected out in the community while they’ve been working, they’re now a close contact to all those other staff … even if they haven’t developed symptoms,” he said.

Professor Toole said it was not yet clear how Victoria’s infections would change in coming days.

“I don’t know what’s going to happen in Victoria, we’ve flatlined now for about going on three weeks, it’s been just above or below 2000,” he said.

“We just have not had any big superspreader events of Omicron, it’s still mostly Delta. We do have vaccine mandates, which New South Wales doesn’t have … thank God we kept that rule.” 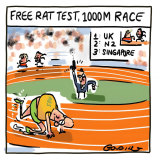 On whether the healthcare system could buckle even further in Australia, especially if there were dual-variant outbreaks and more people ending up in hospital, Professor Baxter pointed to NSW’s peak hospitalisations of more than 1200 in September.

“That was it. I don’t think they could have coped with much more than that; that was already at kind of the breaking point,” she said. “We’re halfway there now.”

With Carolyn Webb and Ashleigh McMillan