Three paramedics have been injured after their ambulance overturned following a collision with an Audi A1 in Dorset.

The Southern Western Ambulance Service flipped on its side following the dramatic crash at a crossroads in Poole on Friday.

The driver of the ambulance managed to climb out of the wreckage through the rear doors while two other paramedics were helped out by members of the public through the passenger side door.

Luckily the ambulance was not carrying any patients at the time as it was returning from a separate incident.

The three paramedics and the driver of the Audi received minor injuries and were taken to hospital as a precaution.

Pictures from the scene show the front of the grey Audi completely crumpled. 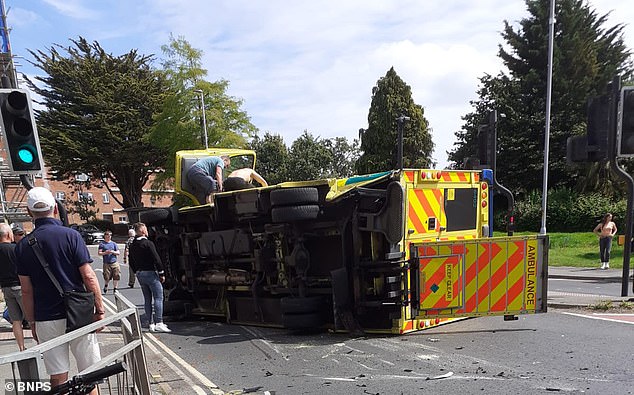 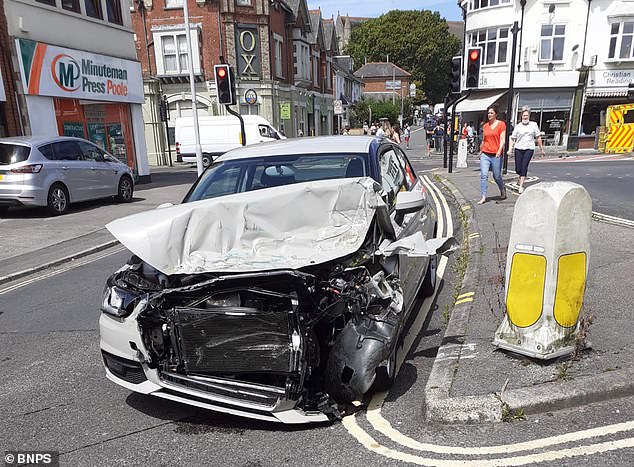 The Audi A1 which clipped the ambulance was pictured crumpled at the front, while its driver, a man in his 70s, walked away largely unscathed

The car’s driver, a man aged in his 70s, managed to walk away relatively unscathed.

The crash occurred on the A35 in the Ashley Cross area of Poole at about 2.20pm.

It is thought the Audi emerged from a side road and clipped the passing ambulance, causing it to overturn.

A South Western Ambulance Service spokesperson said: ‘We were called on Friday at 2.20pm about an incident involving one of our ambulances and another vehicle at Ashley Cross, Poole.

‘We sent multiple resources to attend the incident including land ambulance crews, a critical care team and a doctor.

‘Colleagues from Dorset & Wiltshire Fire and Rescue Service and Dorset Police also supported us at the scene.

‘Four patients including three of our colleagues sustained minor injuries.

‘We treated them at the scene and transported them to hospital as a precaution.’