Riot police in France have clashed with pro-Palestinian protestors on the streets of Paris after large crowds gathered for a banned rally to protest the actions of Israel in Gaza. Flag-waving protestors took the streets of the French capital following six days of heaving fighting between armed Palestinian militants and the Israeli Defence Force which has seen more than 100 killed and left thousands of people in Gaza displaced.

Footage from the rally captures the moment heavily armed riot police charged the march and forced the Pro-Palestinian protestors to flee under a barrage of tear gas canisters.

French officers with riot shields can be seen running through the smoke as they attempt to disperse the crowd.

Masked protestors can be seen responding by hurling smoke grenades and other missiles back at police.

The rally falls on Nakba Day an annual event to commemorate the exile of Palestinians following the founding of the state of Israel in 1948.

JUST IN: ‘Complaining’ France and Germany told to blame Barnier over UK-EU deal 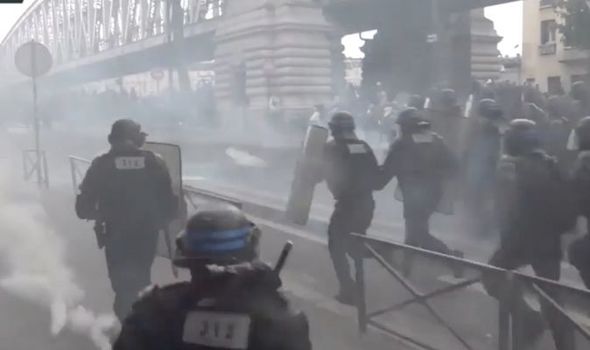 On Thursday Mr Darmanin tweeted: “I have asked the Paris police chief to ban the protests on Saturday linked to the recent tensions in the Middle East.”

He added: “Serious disturbances to public order were seen in 2014.” 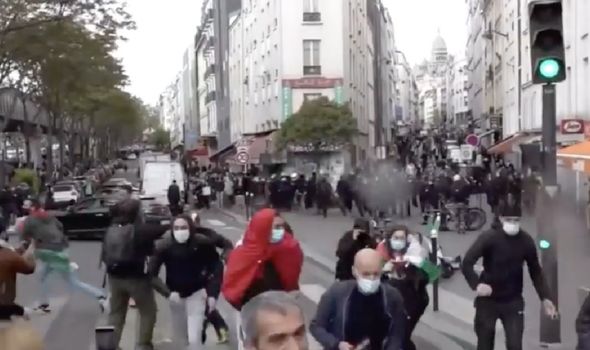 It comes as a number of cities around the world saw demonstrations organised by pro-Palestinian activists.

In London, thousands of people have marched to the Israeli embassy in Kensington.

The crowd chanted “free, free Palestine” as the march moved through hyde back and along Kensington High Street carrying banners and signs calling for Israel to end airstrikes on the Palestinian enclave of Gaza.

In a statement, Metropolitan Police said: “Officers are engaging with a group of people who have gathered for a demonstration in central London this afternoon. A policing plan is in place to ensure everybody is kept safe and to reduce the spread of Covid-19.” 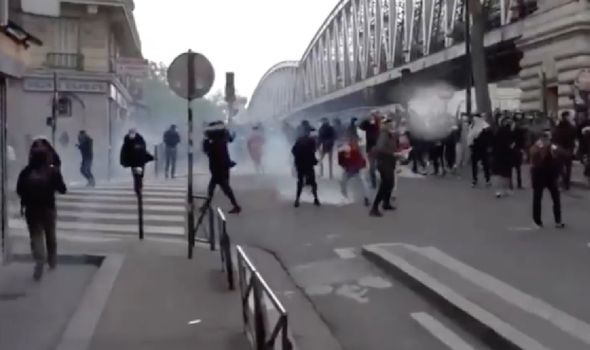 Jeremy Corbyn was present at the London rally and addressed the crowd with the former labour leader being met with cries of “oh, Jeremy Corbyn.”

He said: “Think what it’s like being a mother or father and seeing a building bombed in front of you, knowing your family is in there, and you can do nothing.

“It’s our global voices that will give succour, comfort and support in those settlements alongside Gaza and all over the West Bank, East Jerusalem who are suffering at this time.

“End the occupation now. End all the settlements now and withdraw then. End the siege of Gaza now.”