Party plates rebranded ‘reusable’ ahead of bans on single-use plastics

Environmental groups have accused a major retailer of rebranding flimsy, plastic party plates as reusable in a bid to evade laws banning the sale of single-use plastic items.

Big W is currently spruiking a range of thin plastic plates as reusable and claims they can be put in the dishwasher for 95 cycles. 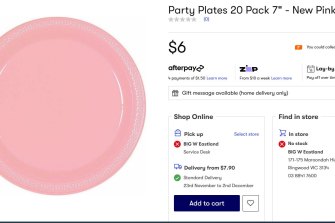 Boomerang Alliance, a group of 53 environmental organisations working to stop plastic pollution, has hit out at the retailer and is pushing for a new standard that would ensure products are genuinely reusable.

It’s concerned more retailers will relabel products as reusable to bypass bans on single-use plastics that are progressively being implemented across Australia.

“Unfortunately the market is not resolving the issue and there are too many people taking advantage of the loopholes,” said the alliance’s director, Jeff Angel.

“Will people put these plates in the dishwasher 95 times? It’s extremely unlikely.”

He said most consumers would throw the plates in the bin after they had finished their picnic or celebration.

Queensland’s Department of Environment, which has banned single-use plastic plates, straws, stirrers, cutlery and bowls, recently wrote to Big W asking for evidence that their plates were reusable.

A spokeswoman for BIG W said all bowls, plates and cutlery sold by the retailer were compliant with legislation and had undergone rigorous, independent testing to ensure they could be reused.

“To help protect the environment and reduce waste, earlier this year we proactively removed all single use plastic cutlery, bowls and plates from our range nationally,” she said. 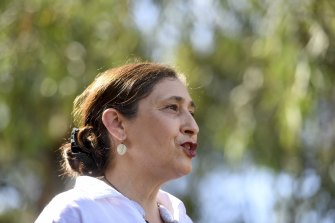 It follows NSW passing new laws this week prohibiting the sale of single-use plastic products, and similar bans in Queensland, South Australia and the ACT.

“As part of the phase-out we are working with businesses and communities to provide clarity on the definition of single-use  and what is included in the ban and what alternatives are genuinely reusable,” she said.

“Businesses are really trying to move towards reusability but we don’t know whether that number is 10 times or 100 times,” she said.

“We currently have a situation where each state is defining single use, some say used once, or some say a limited number of times. We just need clarity.”

As more states introduce bans on single-use plastic products, Ms Johnson said the disparity in rules was creating a headache for retailers that traded online

Spotlight, which is selling a range of plastic plates marketed as both reusable and disposable, has a note on its website saying its plates can’t be sold in Queensland.

“This fabulous convenience product is made from a sturdy plastic to outlast your event but disposable for a quick, post-party clean up,” the website reads.

Dr Simon Lockrey, an associate professor in sustainability and innovation at RMIT University, said he had no issue with retailers rebranding single-use items as reusable, as long as they had been tested for durability.

He said retailers also needed to communicate to consumers that these items were reusable.

“I woudn’t be surprised if plates that were single use previously could be used multiple times,” he said. “It’s a reframing of our interaction with those objects.”