‘We were trying to help him’: Patient being treated in back of ambulance suddenly launches brutal assault on paramedics – but is spared jail

This is the shocking moment a patient being treated by paramedics punches and kicks them before pulling out one of the crew member’s hair.

Horrifying CCTV footage caught 34-year-old Matthew Fealey’s vicious attack on ambulance staff Heath Ismay and Mark Maddy after they tried to help him at 4am on Sunday in Nottingham.

The East Midlands Ambulance Service, which released the footage, said that its staff were physically assaulted almost every week between May 2018 and April 2019 in the area. 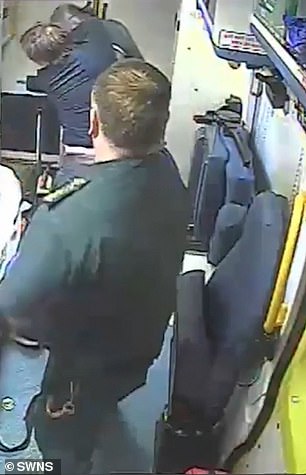 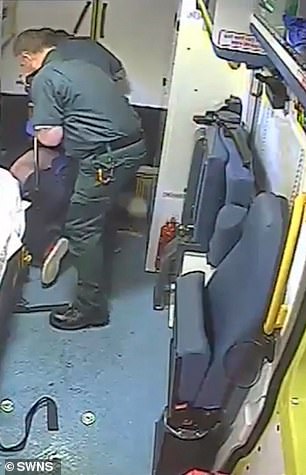 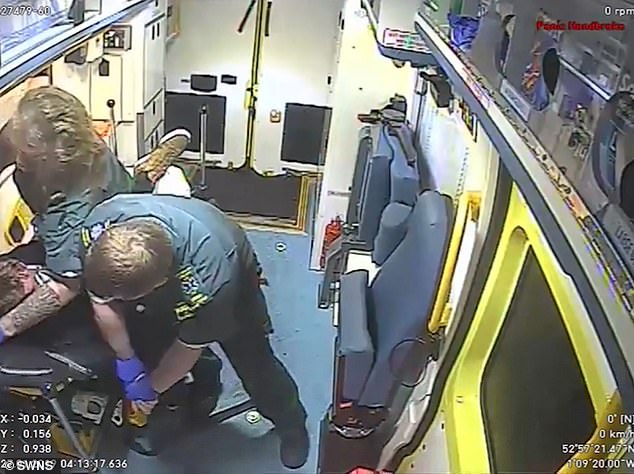 A CCTV camera in the back of the ambulance caught the shocking attack by Matt Fealey after ambulance crews tried to help him. They restrained him and called police, who arrived within six minutes

Shocking CCTV footage shows the patient standing and viciously punching a crew member in the face.

He then falls to the floor and both crew members desperately try to restrain him.

Within six minutes at least four police officers had turned up to help hold down the patient after they were called by the crew.

Fealey, from Methyr Tydfil in Wales, was arrested and charged with assault after launching the attack on January 27 this year.

He was sentenced to a 17-month prison sentence at Nottingham Magistrates court, suspended for 12 months, in March this year.

Heath Ismay, 53, who has worked with the ambulance service for five years said he was ‘quite upset’ to have his hair pulled out, but that you just had to get on with the job at hand.

‘When we arrived to treat him, he was really compliant,’ he said, ‘but within a few minutes his whole demeanour changed’.

‘And the way he was fighting, he was really going for it – he knew what he was doing.

‘I was quite upset about him tearing my hair out, but you just have to walk away and think ‘it could have been a lot worse’.

‘No-one who comes into this job should have to put up with this stuff. It’s just not acceptable.’ 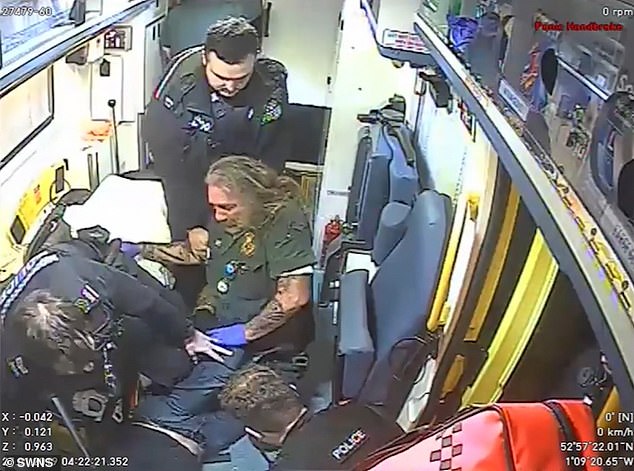 At least four police officers helped paramedics restrain the patient. Fealey was later sentenced to 17 months in prison, suspended for 12 months, on charges of assault 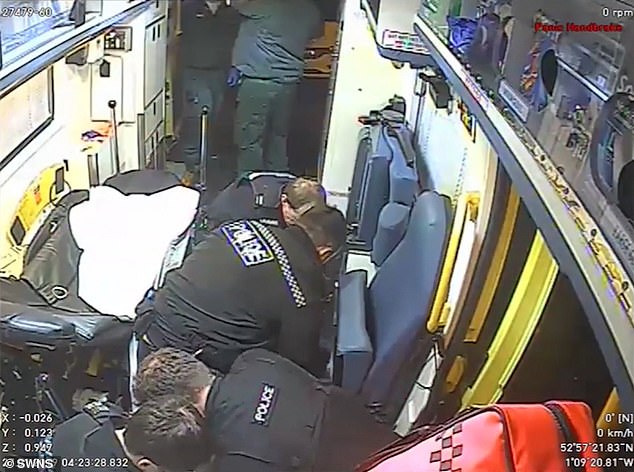 Mark Maddy, 47, an ambulance care assistant for the service for nine years, said: ‘I’ve been verbally assaulted a few times during my nine years at EMAS and once physically, but never on this scale.

‘I was really disappointed that this chap felt the need to have a pop at us, when we were trying to help him.

‘I was okay after this incident, just a bit shocked. It has affected the way I approach similar patients – in the back of your mind you are always wondering if it is going to escalate and get out of hand.’

As many as 30 physical assaults on East Midlands Ambulance Service staff were reported in Nottinghamshire between May 2018 and April 2019.

Of this figure, 16 of people have been sent to court, or given cautions and words of advice dependent on the level of the incident and wishes of the ambulance staff involved. A number of investigations are also on-going at this time.

Police officers have suffered 124 assaults within the same period. 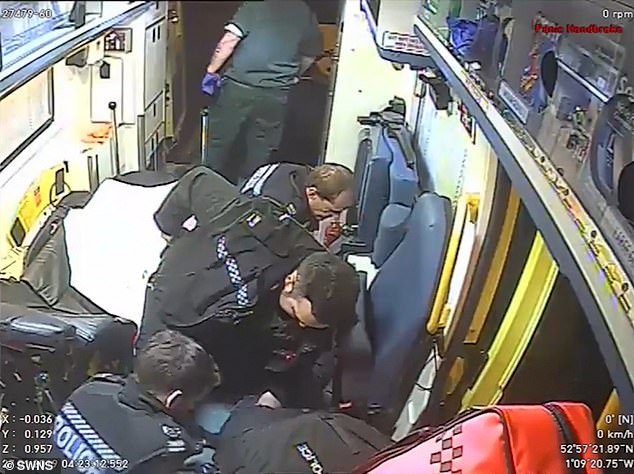 Police officers help to restrain the patient. East Midlands ambulance service reported 30 attacks on its staff between May 2018 and April 2019

While police officers and Police Constable Support Officers have suffered 124 assaults in the same period, between May 2018 and April 2019.

Kelvin Langford, Local Security Management Specialist for EMAS, said: ‘Our frontline colleagues, as well as our team in our 999 control room, signed up to this job to help people, not to be assaulted, and they deserve to be treated with respect.

‘This unprovoked attack is a particularly shocking incident, and as a result the CCTV is difficult to watch. Thankfully, on this occasion our ambulance crew were not badly injured and have made a full recovery.

‘We are grateful that our colleagues in Nottinghamshire Police arrived quickly to arrest Fealey and we have worked closely with both them and the Crown Prosecution Service to pursue a conviction.

‘Assaults on our staff are absolutely unacceptable and we take a zero tolerance approach towards anyone who verbally or physically assaults them.

‘Alcohol or substance abuse is not an excuse and doesn’t wash with us or the legal system.’

Chief Inspector Chris Sullivan added: ‘Any assault on my colleagues in all emergency services is unacceptable. These incidents are incredibly serious.

‘We, as the police, are there to support our colleagues and are working together closer than ever to ensure that this figure decreases.

‘As you can see from the video footage from the ambulance, this is what staff have to go through and it’s simply not right.

‘The crew on that day, handled themselves impeccably and were incredibly brave throughout the whole ordeal.

‘Sadly this isn’t a one-off incident.’