London: Labor backbencher Peter Khalil is replacing the late Kimberley Kitching as the Australian co-chair of the Inter-Parliamentary Alliance on China.

The organisation was founded in the aftermath of China’s economic coercion against Australia in the wake of the pandemic and comprises parliamentarians from 20 legislatures, belonging to a range of political parties around the world. 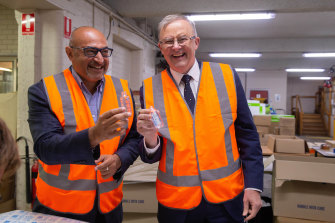 IPAC members encourage their democratic governments to strike a coordinated and tougher approach to Beijing’s aggression.

Kitching was a founding co-chair along with the now junior defence minister Andrew Hastie who had to leave the position when he was promoted. Senator James Paterson now fills the role.

Khalil, who entered parliament in 2016 as the member for the Victorian seat of Wills, said Kitching’s work would be remembered in the history books.

“She was just remarkable in the work that she did around human rights and fighting for democracy and freedom and specifically her work around the Magnitsky laws and shepherding those through and has a real, significant impact at the international level,” he told The Herald and The Age.

He said his driving reason for entering politics aligned with IPAC’s goals and where he envisioned Australia’s place in the world as a strategic middle power.

“We’re in the most important region in the world – the Indo-Pacific, we actually have a critical role to play and I’ve always thought Australia can do more, can be more active in our foreign affairs and our foreign policy.

“Now we don’t have a choice, we have to use all our abilities and our skills to do that,” he said.

China policy has emerged as a major political battleground during the election campaign after the Solomon Islands defied Australia’s requests and inked a security deal with China.

Kahlil said it was more evidence of Prime Minister Scott Morrison and Defence Minister Peter Dutton talking a big game when it came to national security but failing to deliver on the outcomes Australia needed and described Foreign Minister as “Marise MIA Payne” who was “missing in action.”

“They haven’t done the diplomatic hard yards, they should have been working for years with other middle powers in the region,” he said.

The government has retaliated by accusing Labor of siding with China in criticising the government and Prime Minister Scott Morrison has defended his decision to cancel the submarine deal with the French saying it was in Australia’s national interest, even though it bitterly angered re-elected French President Emmanuel Macron.

Khalil said everyone in Labor understood “absolutely” what has required to maintain the security of the region.