New footage taken inside the high-security Belmarsh prison shows a relaxed Julian Assange mixing with his fellow inmates, with one even appearing to help wash his dirty dishes.

The WikiLeaks founder, 47, seems to be popular among other prisoners at the London jail with several spending time with him in his cell.

The footage also reveals the inside of Assange’s small cell, which contains a thin blue mattress.

In one scene, Assange talks about getting the walls of his cell painted as the other prisoners help him tidy up.

Another inmate starts washing Assange’s dishes while the WikiLeaks founder looks on.

The helpful inmate is jokingly labelled a ‘Good Samaritan’ by the prisoner recording the video and, embarrassed, he tells them ‘to go away’.

The footage then cuts to an animated Assange in deep conversation with another prisoner, with what appears to be a folded-up piece of paper in his pocket.

A smiling Assange looks completely at-ease and seems engrossed in the conversation.

The footage was filmed by a Belmarsh prisoner, on an illegally smuggled-in mobile phone.

The prisoner filming describes himself as a supporter of Assange.

Assange sports a neatly trimmed beard and has been given a short prison haircut, replacing the man-bun and unkempt facial hair he had when he was dragged out of the Ecuadorian embassy in April after eight years holed up there.

Grabs of the video had previously surfaced online, but this is the first time the video has been revealed in full.

Assange, who is serving 50 weeks at the Category A jail for breaching his bail, is said to be well-liked by other prisoners. 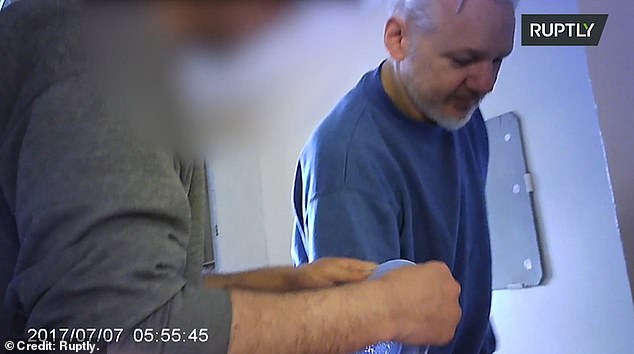 In the video, taken on an illegal mobile phone, Assange watches on as another inmate washes his dirty dishes for him 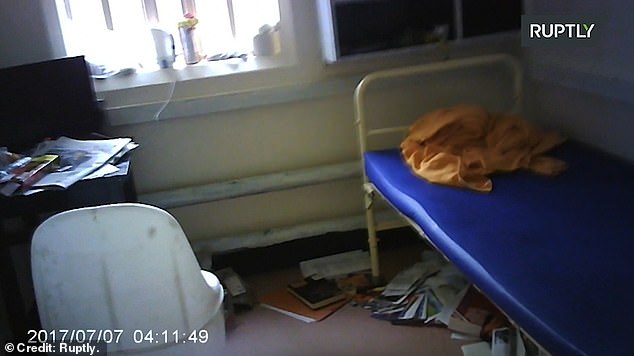 Lawyers for Australian Assange recently said his mental health was so poor they could not hold a normal conversation with him and WikiLeaks said he had been moved to the jail’s hospital wing due to ill-health.

He did not appear via videolink as planned at a court hearing last week.

The photos and video footage is believed to have been taken before Assange was moved to a medical unit after falling ill.

Assange faces extradition to the United States where he could be locked up for the rest of his life if he is found guilty of the charges he faces of breaching the Espionage Act.

The prisoner, whose claims have not been corroborated, said he was a supporter of the Australian, saying: ‘He exposed the biggest scandals in the world. Whose side do you think someone in prison would be on? The government who have us locked up in here or a fellow prisoner who actually doesn’t deserve to be here?’ 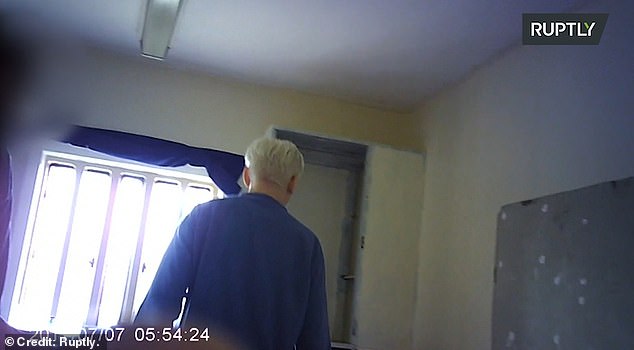 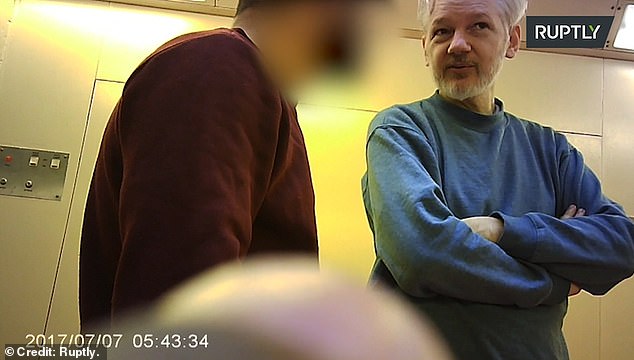 After being told Assange looked like he had lost weight, the inmate remarked ‘it’s true. Belmarsh has sucked the life out of him.’

Speaking generally about how Assange is viewed by the other inmates, the prisoner said that he is well liked among the prison population. ‘Everyone’s got a million questions for him — like ‘is the illuminati real?’ He’s probably heard that question a million times,’ the inmate said, along with laughing emojis.

Mr Assange lived inside the Ecuadorian embassy in London for almost seven years before being dragged out last month and sentenced to 50 weeks in jail for a bail violation.

He now faces an extradition request from the US to face claims of violating the US Espionage Act by publishing classified military and diplomatic documents in 2010.