A cutting-edge test for Covid sufferers that predicts how severe their illness will be can now be sold in the UK.

The Israeli-made test, thought to be the first of its kind in the world to get approval, works using a blood sample and gives a prognosis in 15 minutes.

It was today given a CE mark in Europe, which allows it to be sold to hospitals in the European Union. The mark shows the product meets EU regulatory standards.

A CE stamp means it can also be sold in Britain until at least early 2022, when Brexit transition arrangements are due to kick in.

The ‘MedMed Covid-19 Severity Test’ will be available for both private and NHS hospitals.

It works by scanning the blood of Covid-infected patients for three key biomarkers of the severity of a Covid infection – including inflammation.

Using machine learning, it then allocates patients a score out of 100, with those receiving higher numbers deemed most at risk from the virus.

Developer MeMed said the test could save lives by prioritising patients most likely to fall critically ill. It’s not clear how much the test costs. 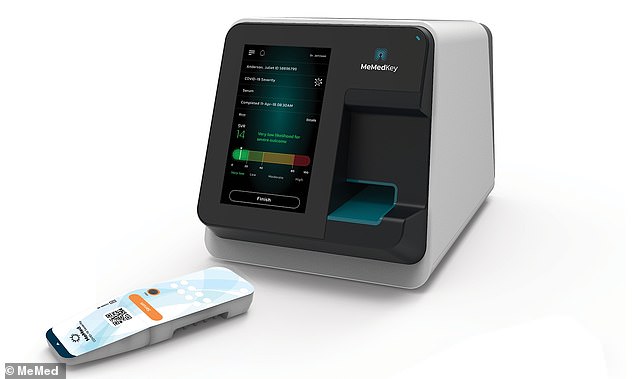 The machine works by scanning the blood of Covid-infected patients for three biomarkers of severity of disease. Its developer, MeMed, has not revealed how much the test costs 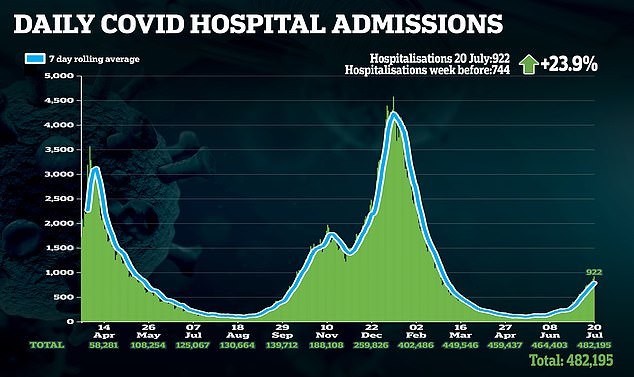 There are currently almost 800 people admitted to UK hospitals suffering from Covid every day, figures show (above). And 5,000 Covid patients are in hospital beds

The test works by taking a blood sample from a Covid infected patient.

This is then placed into a machine which analyses levels of three proteins that indicate whether a patient could end up in intensive care.

Two of these proteins are linked to Covid-fighting T-cells in the immune system, and a third reveals levels of inflammation in the body.

A blood test to diagnose long Covid patients could be ready within just six months, scientists said earlier this month.

Researchers have found survivors left with lingering symptoms have an unusual pattern of antibodies in their blood.

It raises the prospect that sufferers of the poorly-understood condition could soon be spotted through a simple test. No diagnostic test or cure currently exists.

Researchers say patients can find it hard to convince GPs they are really suffering from long-Covid symptoms, such as fatigue and headaches.

Little is known about long-Covid — an umbrella term for symptoms that last for more than 12 weeks after being infected.

Imperial College London researchers compared the blood of dozens of patients for the study, which was published two weeks ago.

They found long-Covid sufferers had certain auto-antibodies not present in patients who recovered quickly from the virus or never had it.

Auto-antibodies are proteins produced by the immune system that cause the body to attack its own organs.

They differ to standard antibodies, which are made to fight off infections such as Covid.

The researchers will now carry out more detailed studies, with the hope of getting a test to market.

Higher levels of inflammation and lower levels of T-cell activity have been linked to more severe Covid infections.

An algorithm then allocates the patients with a score from 0 to 100, with those getting above 40 thought to be most at risk.

Studies of the kits published at the start of this month involved 394 patients who had tested positive for the virus in Israel, Germany and the US.

Of these, 113 were admitted to hospital following infection and 30 died from the disease.

The researchers behind the test said their results showed that patients who got higher scores were more likely to be hospitalised.

Of the 203 Covid patients identified as low risk, only 13 (six per cent) went on to develop severe disease and were admitted to hospital.

Results also showed 91 of 191 Covid patients (47 per cent) the test said were likely to suffer severe disease went on to experience a mild illness.

But this may be down to the patients getting better treatment early on following the warning from the test kit, the makers say.

It comes after British start-up Oxford Biodynamics launched its own Covid severity test in the US earlier this year and studies are ongoing.

There are currently almost 800 people being admitted to hospital suffering from the virus every day across the UK, on average.

And there are 5,000 Covid patients in hospital beds in the country.

Separately, a blood test developed by Imperial College London that could identify long Covid could be ready in six months.

Researchers have found survivors left with lingering symptoms have an unusual pattern of antibodies in their blood.

It raises the prospect that sufferers of the poorly-understood condition could soon be spotted through a simple test. No diagnostic test or cure currently exists.

Researchers say patients can find it hard to convince GPs they are really suffering from long-Covid symptoms, such as fatigue and headaches.

Little is known about long-Covid — an umbrella term for symptoms that last for more than 12 weeks after being infected.

But official estimates say there could be more than 1million people living with long Covid in England alone by this time.