It's a rare week in America when anyone other than US President Donald Trump sends the most explosive tweet. But Daryl Morey, the general manager of the Houston Rockets basketball team, managed to do that when he logged onto Twitter last Friday local time (Saturday AEST).

With just seven words, Morey plunged one of the world's most successful sporting leagues into an unprecedented financial and public relations crisis. And he triggered a debate about whether it is possible for even the most powerful global brands to protect freedom of expression while managing to do business in China.

In doing so, Morey brought attention to another issue Australian businesses must cope with as China and its illiberal leadership gains leverage in world affairs.

For most other Americans, Morey's short tweet – "Fight for Freedom. Stand with Hong Kong" – would have been unremarkable. But for a senior figure in the National Basketball Association (NBA) it was explosive.

The NBA has been working to break into the Chinese market since the 1980s, and has had more success doing so than any other US sport. The big breakthrough came in 2002 when the Rockets signed the 2.3-metre-tall Chinese superstar Yao Ming to its roster.

This year the NBA struck a $US1.5 billion ($2.22 billion) deal with Chinese broadcaster Tencent for live streaming rights in China. With more than 600 million people in China tuning in each year to watch NBA games on state-owned television, it’s the league's biggest partnership outside the US.

This exposure makes China a wildly lucrative market, not just for the NBA but for sponsors like Nike who want to gain more exposure for their brands.

Which is why NBA players, coaches and administrators have steered clear of any criticism of China – especially on highly sensitive subjects like the pro-democracy rallies in Hong Kong. 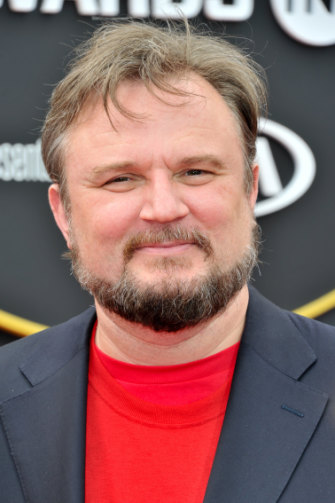 Rockets owner Tilman Fertitta quickly realised how much was at stake, tweeting soon after: "Listen … @dmorey does NOT speak for the @HoustonRockets … we are NOT a political organization."

The NBA put out a statement saying it recognised Morey's tweet had "deeply offended many of our friends and fans in China, which is regrettable".

Morey deleted his initial tweet and posted an apology. But the damage had been done.

In the days after the tweet the Chinese Basketball Association announced it was suspending cooperation with the Rockets. CCTV's sports channel then announced it would suspend broadcasts of the NBA's preseason games, as did digital partner Tencent. 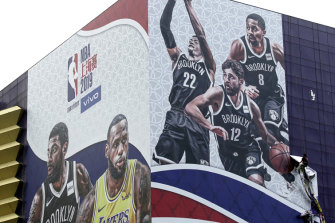 A billboard advertising an NBA preseason game between the Los Angeles Lakers and Brooklyn Nets in Shanghai.Credit:AP

China’s touchiness about perceived insults encoded in Western marketing may have increased since June, when the Hong Kong protests began, but it’s not new.

A string of high-profile luxury brands popular with China’s new rich have all been targets in recent years. Versace, Coach, Givenchy (for a map on a T-shirt that showed Hong Kong and Taiwan as separate from China); Gap (for T-shirt map omission of Taiwan and the South China Sea); Leica (for a video involving the iconic Tank Man protester), and Mercedes-Benz (for a Dalai Lama quote in an ad).

The outrage doesn’t necessarily begin with the government. Just as often a Chinese "patriot" takes offence to a map or even a website displaying "Taiwan" or "Hong Kong" or "Tibet" as having a status equal to or separate from "China".

A customer survey for the Marriott hotel chain made that mistake last year and was picked up by the Communist Youth League’s official Weibo account. Before the firestorm was over, China’s government probed Marriott for violating national cybersecurity and advertising laws. Marriott later apologised for the website error. 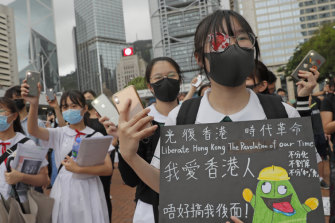 A student wears an eye patch to show solidarity with a woman injured by a police projectile in Hong Kong. Credit:AP

The CCP’s extreme sensitivity about the question of China’s borders is no secret. But the nation’s growing economic heft and centrality to markets allows Beijing to project its ire far beyond its borders.

International air carriers find themselves in a vulnerable position largely because of maps and the air routes naming issues their work involves. All it takes is for a mapmaker to characterise Hong Kong as a separate entity and Beijing can send angry missives with the threat to deny landing rights to the airline.

That happened in April last year, when the Civil Aviation Administration of China, the state airline regulator, sent a letter to Qantas telling the Australian carrier to remove any information that depicted Taiwan, Hong Kong and Macau as separate from China. Qantas complied.

US airlines American Airlines, United Airlines and Delta have had similar experiences.

The targets for a social media-enabled firestorm don’t always include luxury brands or airline route maps. In June, UBS Global Wealth Management chief economist Paul Donovan was placed on leave after Chinese citizens took offence to offhand comments about a “Chinese pig” during a podcast discussion.

As the Rockets' Daryl Morey is finding out, it’s incredibly difficult to anticipate what comment can draw the rage from China.

As the rising superpower tries to shape the global discussion about itself, such outbursts are starting to create uneasiness in countries where freedom of expression is the norm. Trump’s trade war with China has injected a further element of volatility into the consensus around how to treat China.

Australia is no stranger to Beijing’s official and unofficial reproach.

Acceptance of Australian coal was slowed down early this year in what was seen as an indication of Beijing’s disapproval for Canberra’s Huawei ban and foreign interference legislation.

While differences between Canberra and Beijing have cropped up repeatedly, Australian brands typically keep a lower profile in dealing with China.

Businesses are not necessarily self-censoring when it comes to the country’s largest trade partner, but they’re not taking extra risks with their public images in China.

"Any company with an investment in China avoids talking about Chinese politics or the relationship with Australia," the Australian Industry Group's international trade advocate Louise McGrath said.

Australian brands may actually be shielded by the nature of the country’s trade relationship with China.

Philipp Ivanov, chief executive of the Asia Society Australia, says that because Australia's trade relationship with China is "mostly commodities-driven, it doesn't require a lot of consumer interactions and physical presence in China".

"Apart from Blackmores and Swisse vitamins or tourism and education-related brands, we don't have massive consumer brands that need access to China’s market making us open to economic coercion.

"We’re vulnerable to some coercion in this area but not at the same scale as European and US luxury brands," he said. "We would likely see less self-censoring than by companies in the European and US economic space."

The numbers bear this out. While China is Australia’s largest two-way trade partner, the US is the number one source of investment into Australia at $189 billion, more than four times that of China, according to DFAT numbers.

A 2017 Australian National University analysis of China’s economic leverage over Australia concluded: "The lasting economic impact of some future act of Chinese leverage or coercion is relatively manageable.

"However, the perception of economic harm can have an outsized effect on domestic interests, creating pressures for rapid political compromise."

The pressure for rapid compromise is what makes global brands buckle so quickly. The question is whether Western consumers and politicians will mobilise to defend free speech as vigorously as China has done to protect its conception of its territorial sovereignty.

"For US companies to stop appeasing Chinese censorship, corporate decisionmakers are going to have to believe that the reputational and political costs of doing so outweigh the damage done to their interests in China," James Palmer wrote in Foreign Policy this week.

"That’s going to take concerted action from members of the public elsewhere in the world."

Until then, Australia’s business leaders appear to be watching but speaking in a muted voice.