Several P&O Ferries agency staff have been fired after testing positive for alcohol when they turned up for work – just a month after the shipping company sacked 800 of its seafarers.

Seven of the new workers, who were employed to replace permanent staff dismissed by the firm last month, were relieved of their duties after breaching guidelines on alcohol consumption.

The agency staff returned to work on board a ferry over the limit, after leaving the ship for shore leave.

They were dismissed with immediate effect by P&O, which has a zero-tolerance policy on alcohol. 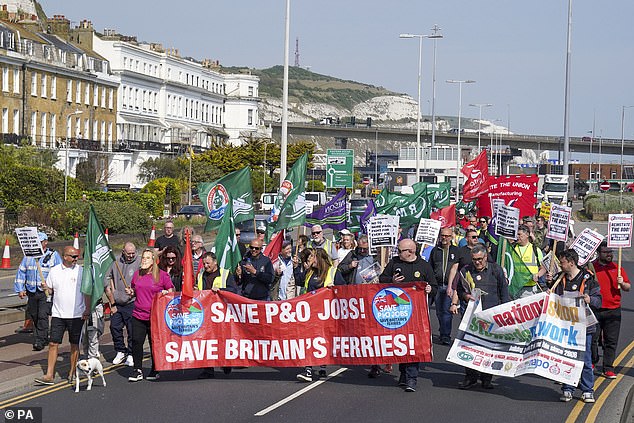 Seven of the new workers, who were employed to replace permanent staff dismissed by the firm last month, were relieved of their duties. Above, people protest in Dover today over the sacking of P&O Ferries staff last month 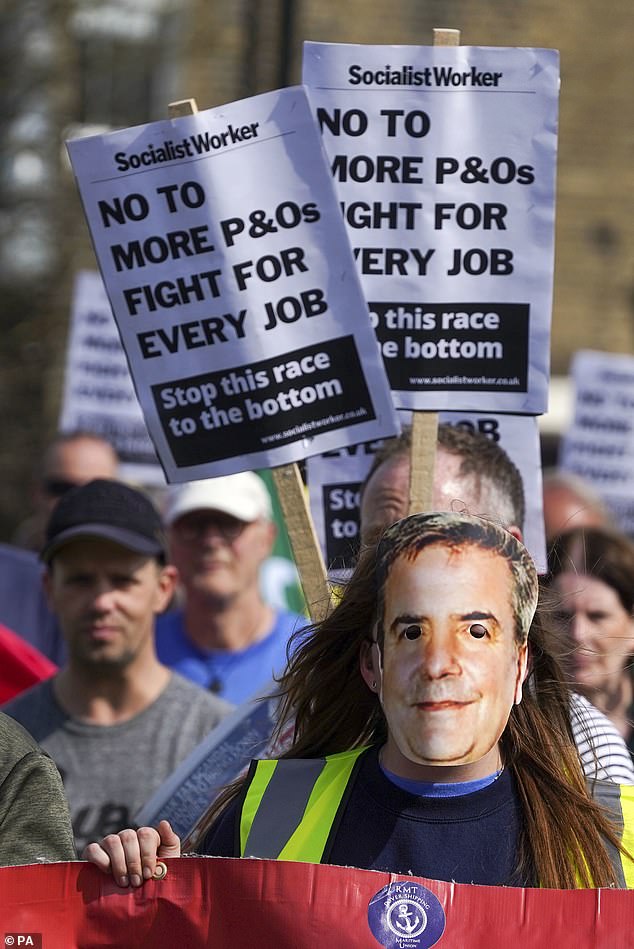 This comes after P&O made 800 of its staff redundant on March 17 – claiming it was losing £100 million a year and at risk of collapse if it didn’t make the move.

The crew were controversially replaced with cheaper agency workers, whose average hourly rate of pay is around £5.50 – significantly lower than the UK minimum wage, which stands at £8.91.

Because P&O operates internationally and its ships are registered overseas, the minimum hourly rate does not apply to its new staff.

Several unions questioned the legality of making so many staff redundant and raised fears over a lack of training of the new crew.

P&O has since confirmed that seven of its agency-employed seafarers have been dismissed with immediate effect after breaking alcohol consumption regulations.

A spokesperson for P&O Ferries said: ‘We can confirm that seven agency-employed seafarers who returned from shore were found to be in breach of our strict guidelines on alcohol consumption and have been dismissed with immediate effect.

‘The safety of our passengers and crew is our foremost priority and we continue to operate a zero tolerance policy towards drinking whilst on duty.’

Protesters continue to take to the streets of Dover, Kent to object the controversial sackings.

Around 200 people attended a demonstration today – chanting slogans including ‘sack the board’ and ‘they say low pay so we say no way’ as they marched in solidarity with the former P&O staff.

But despite drafting in agency workers almost immediately after sacking its seafarers, the firm’s ships still haven’t moved from the port on the Kent coast.

The Spirit of Britain and Pride of Kent vessels remain under detention after failing safety inspections, causing a shortage of capacity on the Dover-Calais ferry route.

This has contributed to large queues of lorries on coastbound roads in Kent.