Another night of carnage: Police clampdown on revellers holding parties in parks after they ignored pleas to follow the rules on last day of 75F mini-heatwave

Police clamped down on revellers massing in large crowds last night after thousands ignored pleas to stick to follow the rules on the last day of the 75F mini-heatwave.

Officers were seen clearing drinkers from Castlefield Bowl in Manchester after hundreds gathered for a rave with a live DJ set, while similar police action took place in Hyde Park, London.

Earlier in the day, police in Nottingham had been seizing bottles of alcohol from sunseekers and pouring it on the grass after ‘appalling scenes’ in the city’s arboretum earlier in the week.

Police and crime commissioner Paddy Tipping: ‘Police think that if they can get on top of control over alcohol confiscation, and make the people holding it pour it away, then it will lead to better behaviour.’

The tougher approach to enforcing the rule of six comes amid warnings from experts that throwing out all social distancing could lead to a large spike in infections, even after millions have received vaccines.

However, police chiefs have warned ministers that the rule of six is virtually unenforceable because of the two household concession – which puts no limit on numbers.

It came as litter pickers were out in force this morning to clear another mountain of rubbish left behind by revellers yesterday. 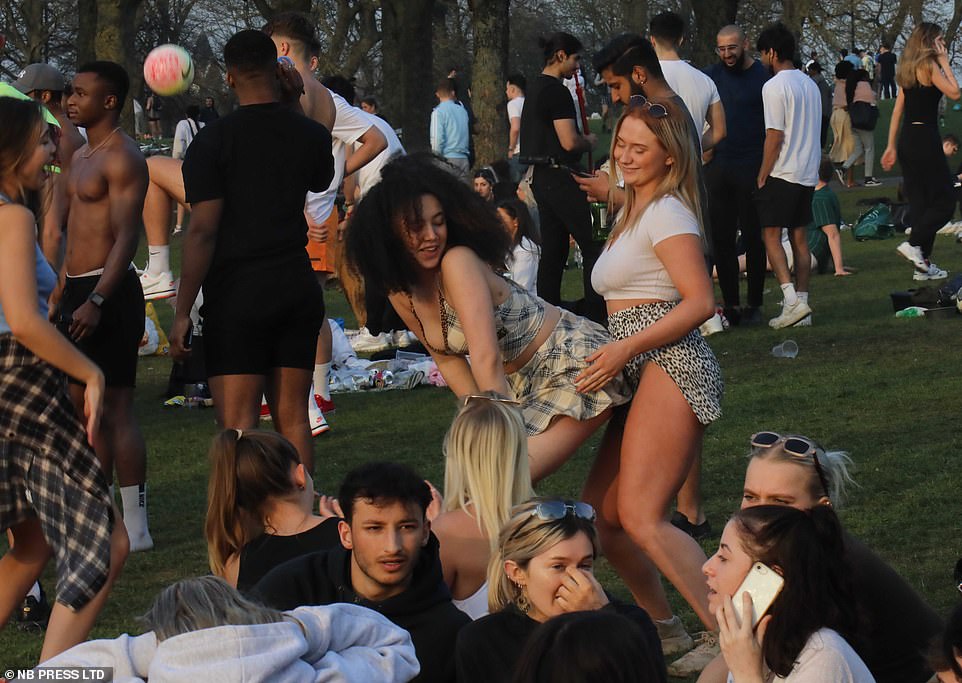 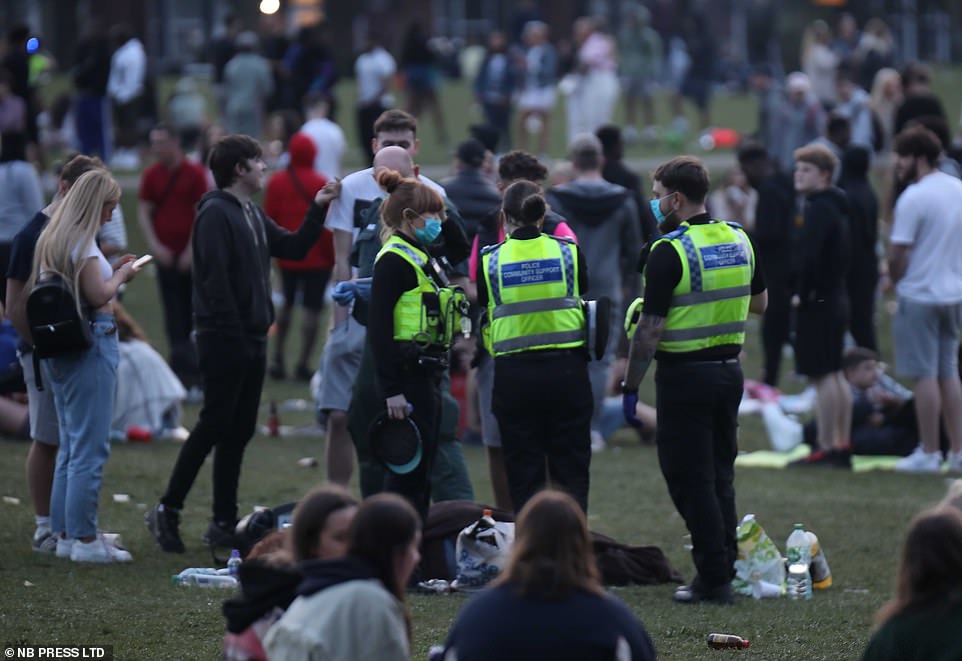 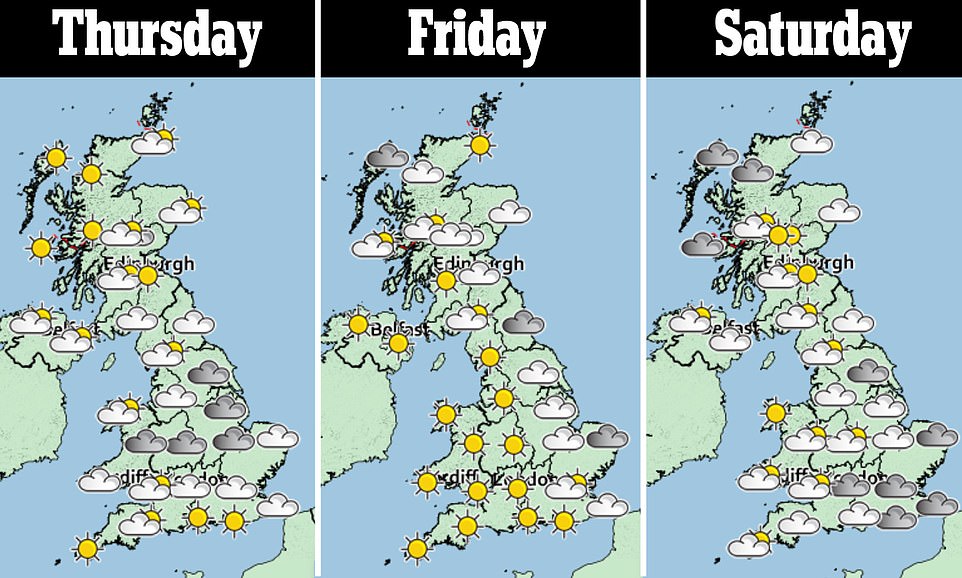 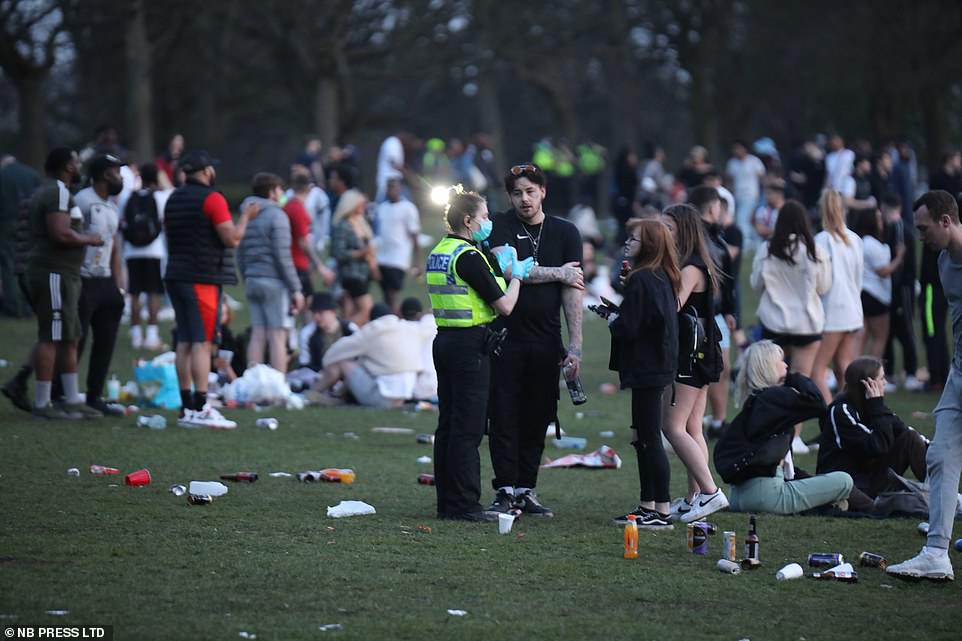 Police speaking to drinkers in Hyde Park in Leeds, which like other city centre parks was left strewn with rubbish this morning 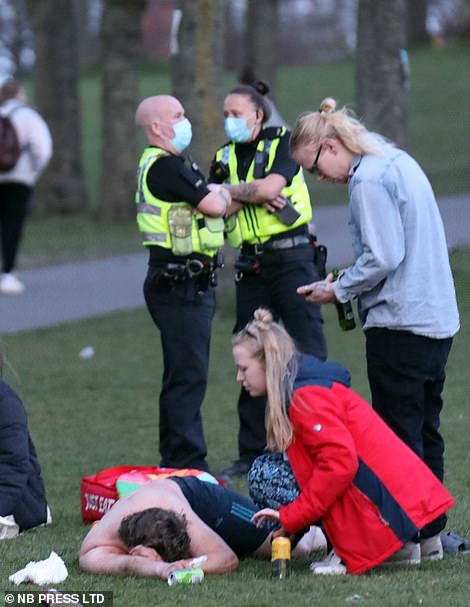 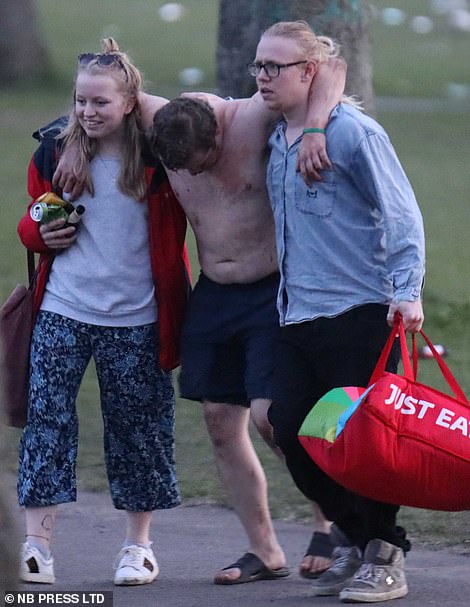 Friends speaking to a man in Hyde Park in Leeds as police watch on. Many stayed in the park drinking all day yesterday 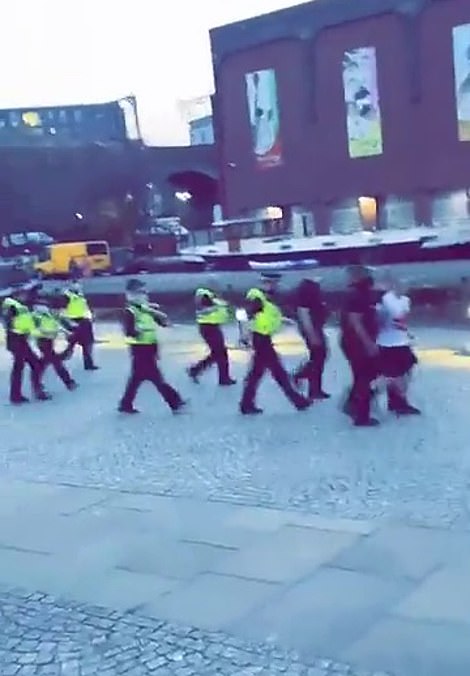 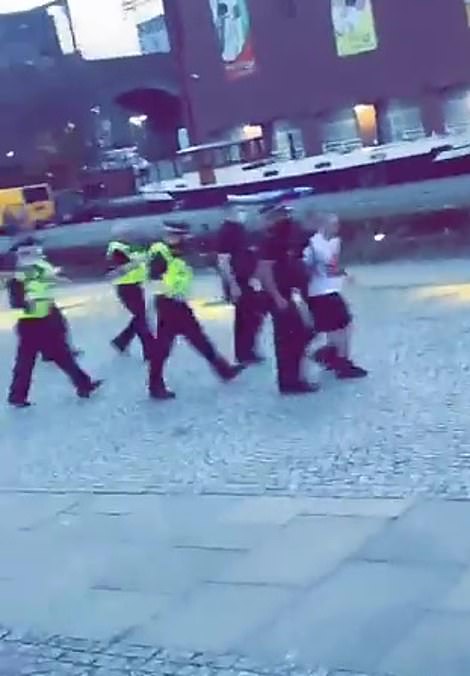 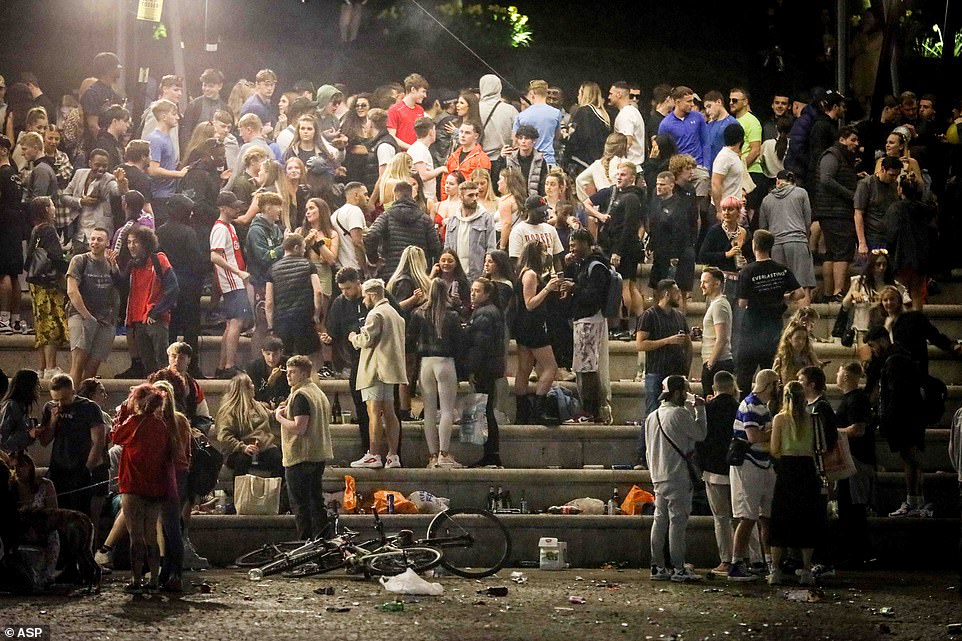 The rave at Castlefield Bowl in Manchester before it was cleared by police last night. Hundreds of people had gathered at the city centre location 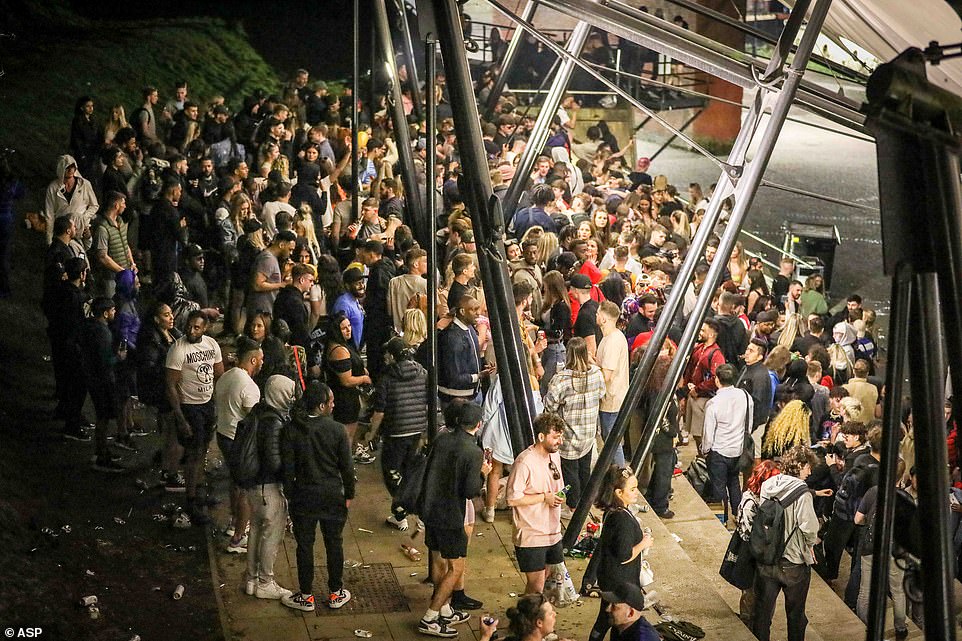 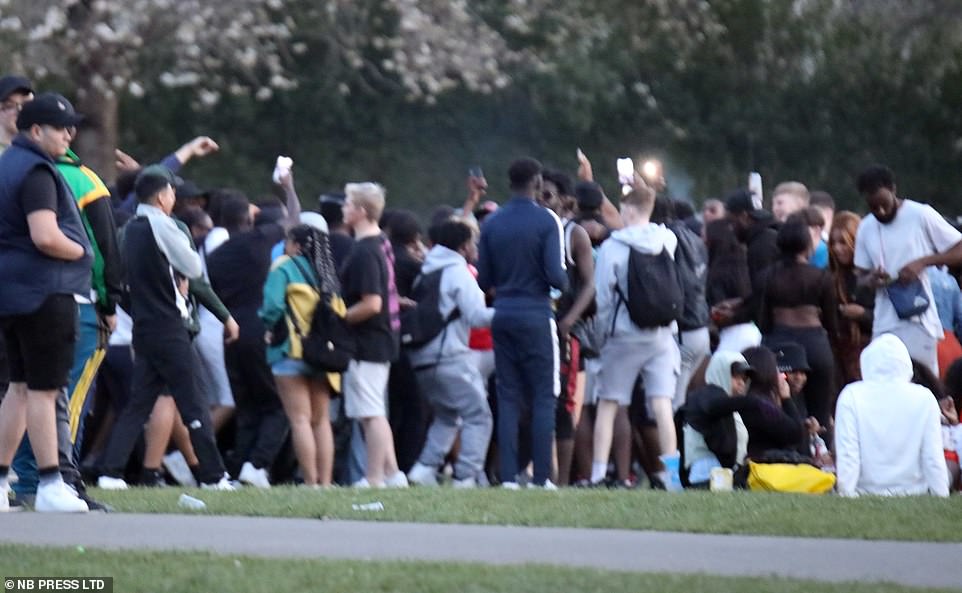 Rowdy scenes in Leeds’ Hyde Park. Police have said it is getting increasingly difficult to ensure people stick to the rule of six

The hot weather which baked much of the UK this week is set to give way to a chilly Easter weekend. Parts of the UK saw temperatures hit almost 24C (75.2F) on Wednesday, with Weybourne, north Norfolk leading the way at a peak of 23.9C (75F).

The figure fell just shy of the nation’s hottest ever March temperature of 25.6C (78F), which was recorded in 1968 at Mepal in Cambridgeshire. But the warm weather will not extend into the Easter weekend, with temperatures forecast to drop to the low teens in the east of England from Thursday.

Met Office spokesman Grahame Madge said a ‘cold front’ will start moving down from the north, bringing with it colder, windier conditions in stark contrast to the previous ‘warm southerly winds’.

Good Friday is expected to be fine and sunny for much of the UK before developing into rain on Easter Sunday, with the chance of sleet or snow in Scotland and the far north of England.

Mr Madge said: ‘Friday should mark a rather malign start to Easter, with colder conditions for large swathes of the country as part of an Arctic plunge.

‘Temperatures will be dragged down quite a bit from the day before, with wintry showers expected in Scotland and the most northern regions in England.’

Temperatures are expected to bottom-out on Easter Monday, with the mercury likely to hover around 0C (32F) in much of Scotland and north east England. 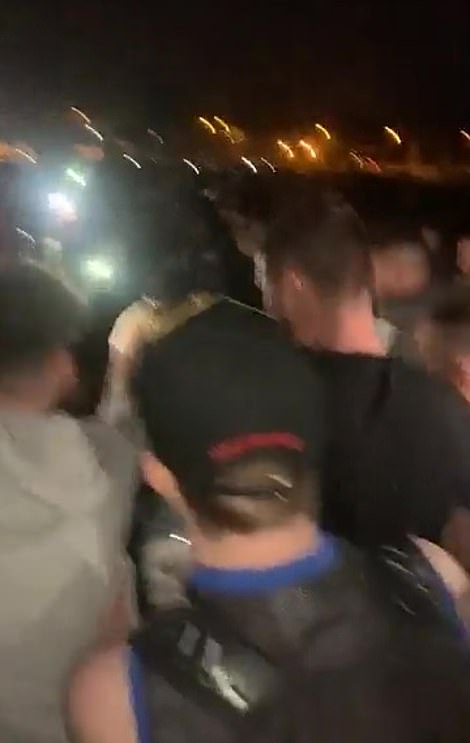 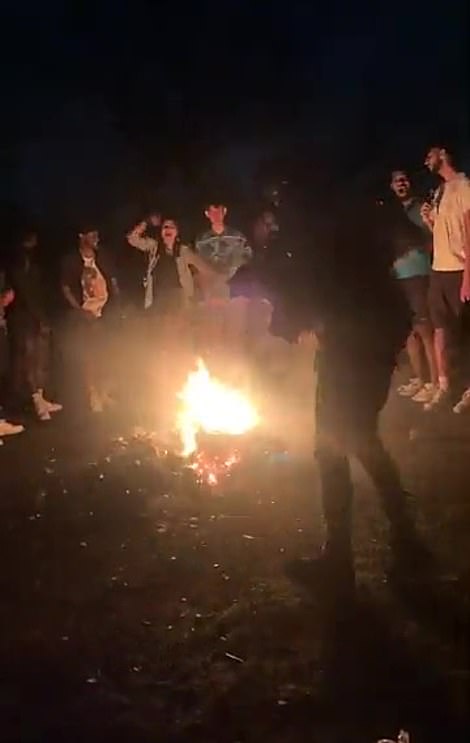 Crowds in a park in Nottingham (left) and Manchester (right), where revellers lit a fire and danced around it amid balmy temperatures 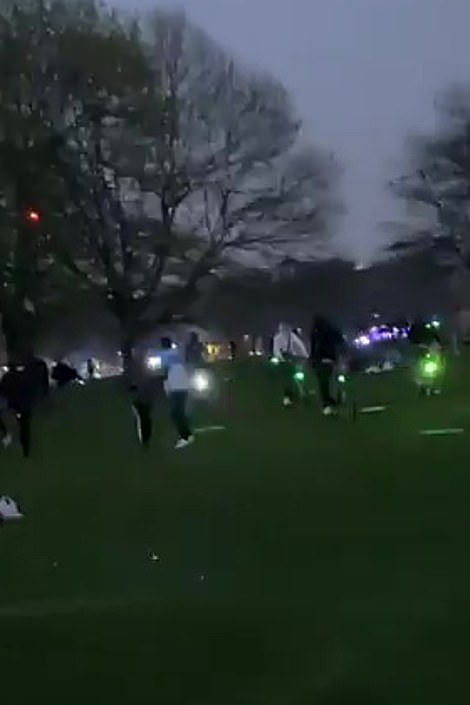 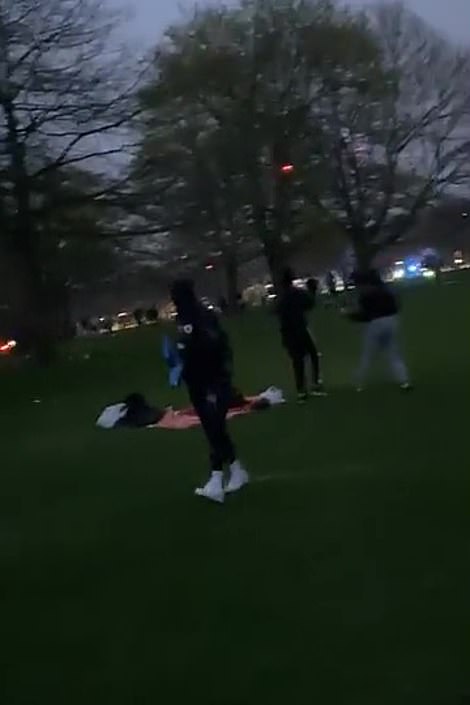 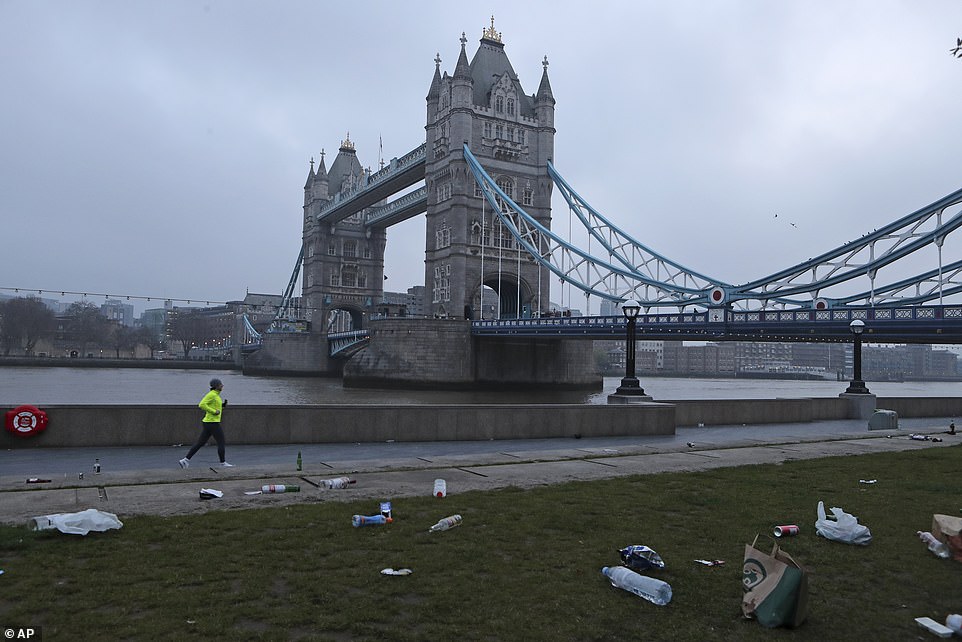 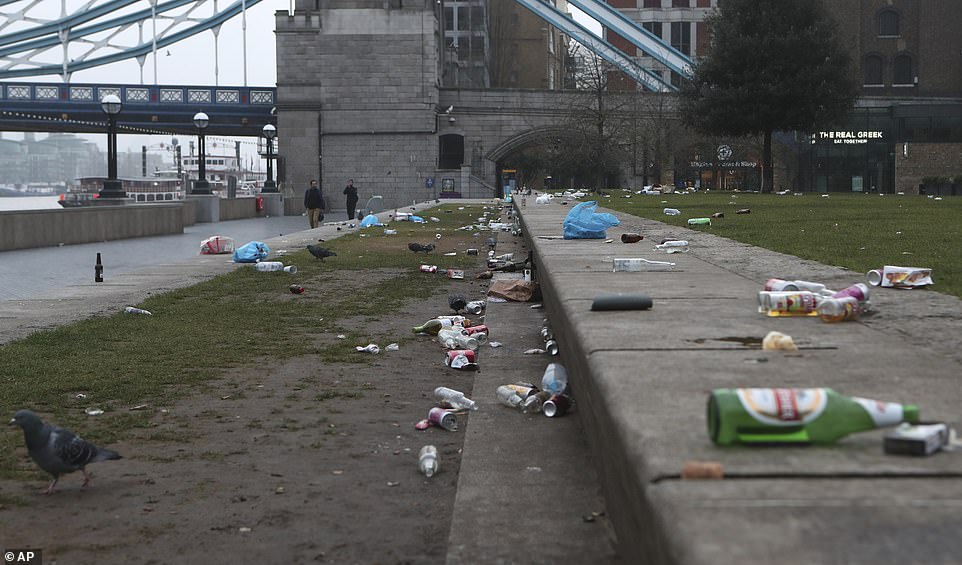 Potters Field Park is a popular meeting point, especially when the weather is good and even more so as Britain emerges from lockdown 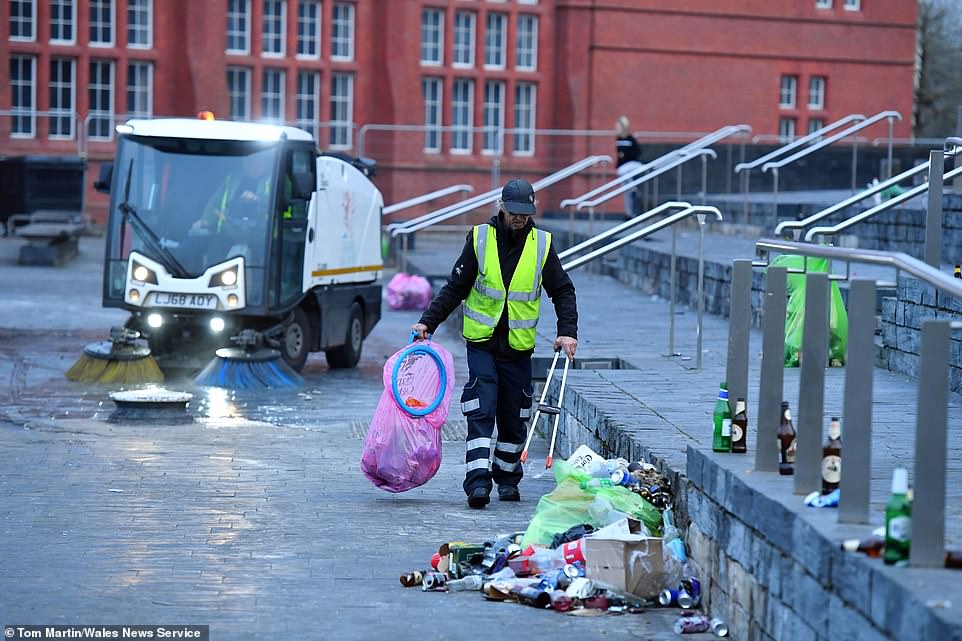 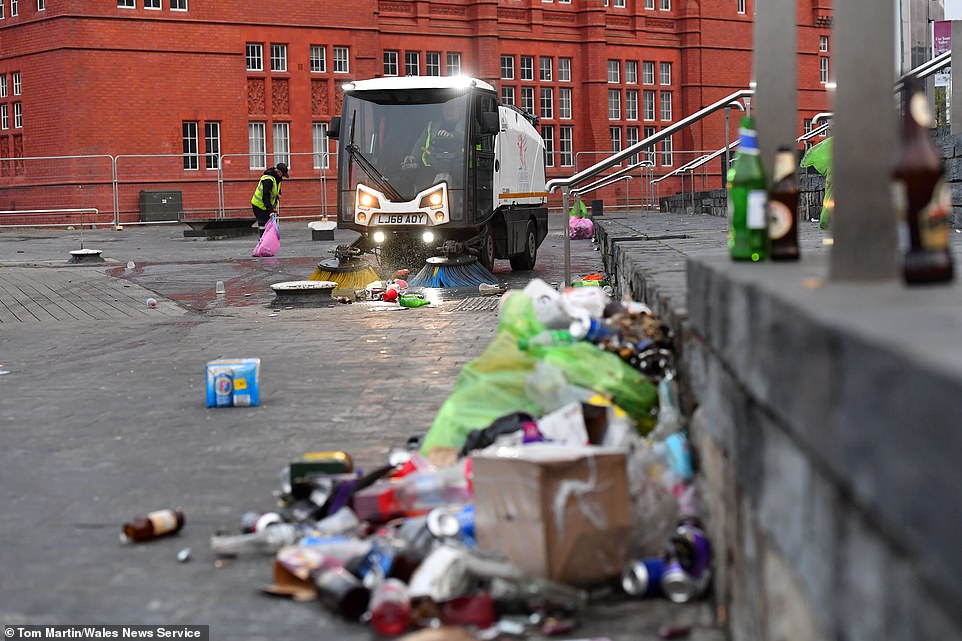 The biggest crowds yesterday appeared to be at Woodhouse Moor in Leeds, where hundreds of people gathered – and West Yorkshire Police warned they would ‘disperse groups of over six, using fines where appropriate to do so’.

Elsewhere in the region a 14-year-old boy died after getting into difficulty at a waterfall. He was spotted struggling in a pool at about 6pm yesterday below the Goit Stock Waterfall beauty spot at Cullingworth near Bradford.

Communities Secretary Robert Jenrick urged people to make the most the latest easing of lockdown restrictions in England in a ‘sensible, cautious’ manner, enjoying the sunshine but also being careful and sticking to the rules.

He told ITV’s Good Morning Britain: ‘We’ve all waited a long time to meet family and friends outdoors with these very limited freedoms we have now. We just need to exercise caution and be sensible and pragmatic.

‘I think the vast majority of people will do that. They will enjoy the sunshine this week and over the Easter weekend, but they will do that in a sensible and cautious way.’

Mr Jenrick added that people should try ‘to be careful, sticking to the rules’, while Health Secretary Matt Hancock tweeted last night: ‘Let’s enjoy the sun but let’s do it safely. We have come so far, don’t blow it now.’

Their comments come after the Prime Minister said he hoped people would take advantage of the ‘beautiful weather’ to play sport or exercise, while also emphasising the country should still ‘proceed with caution’. 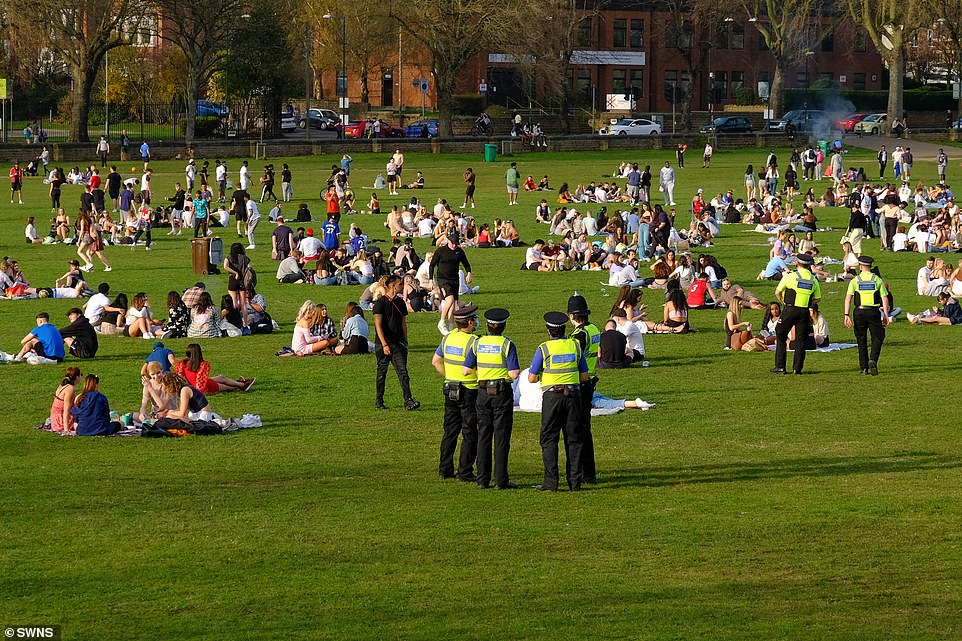 Police were out in force at the Forest Recreation Ground in Nottingham yesterday. Lockdown rules were partially relaxed this week 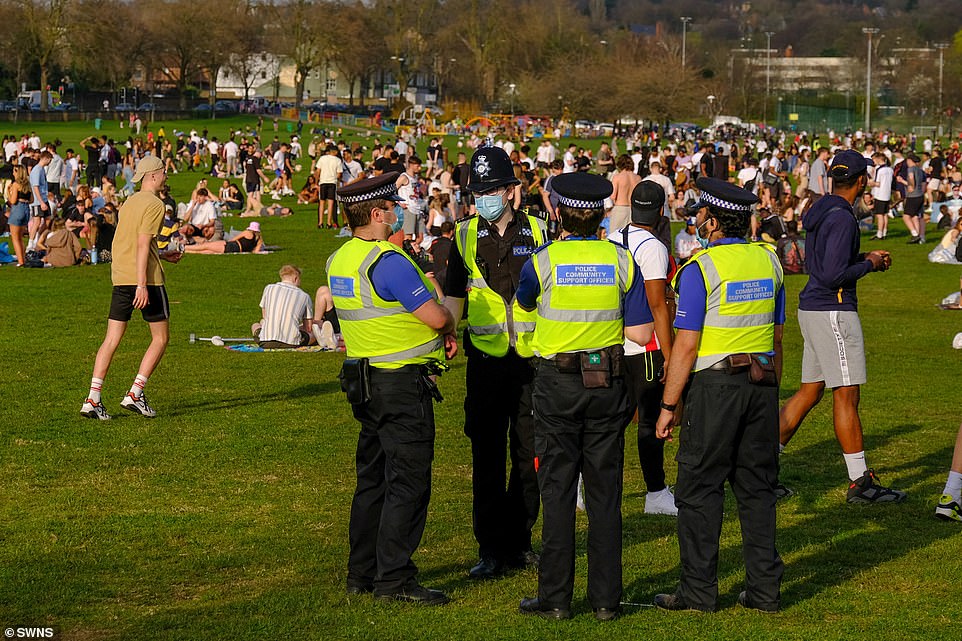 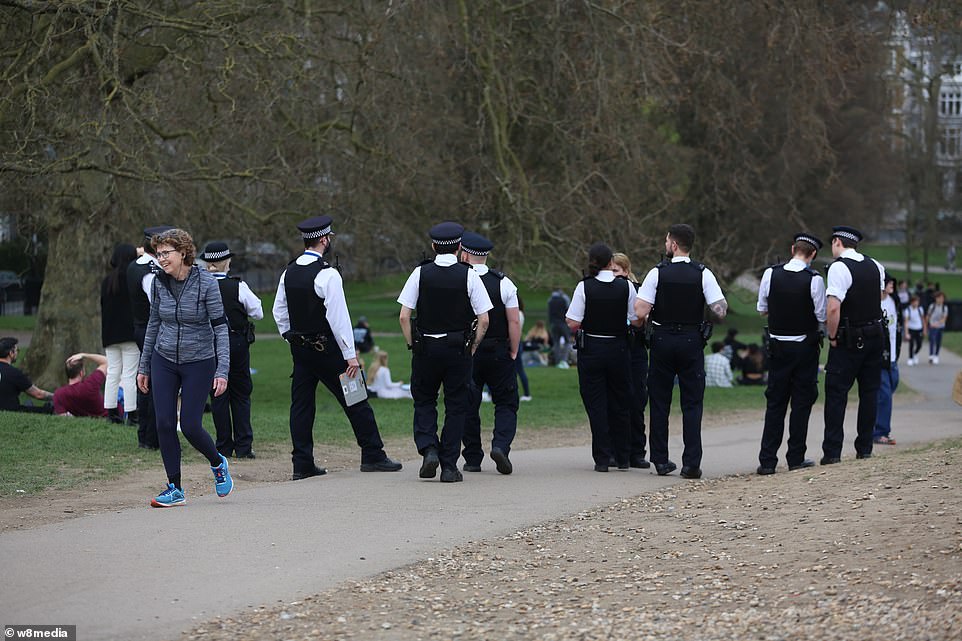 Police were seen in Primrose Hill yesterday as Britons rushed to the great outdoors. The weather has been unseasonably sunny this week 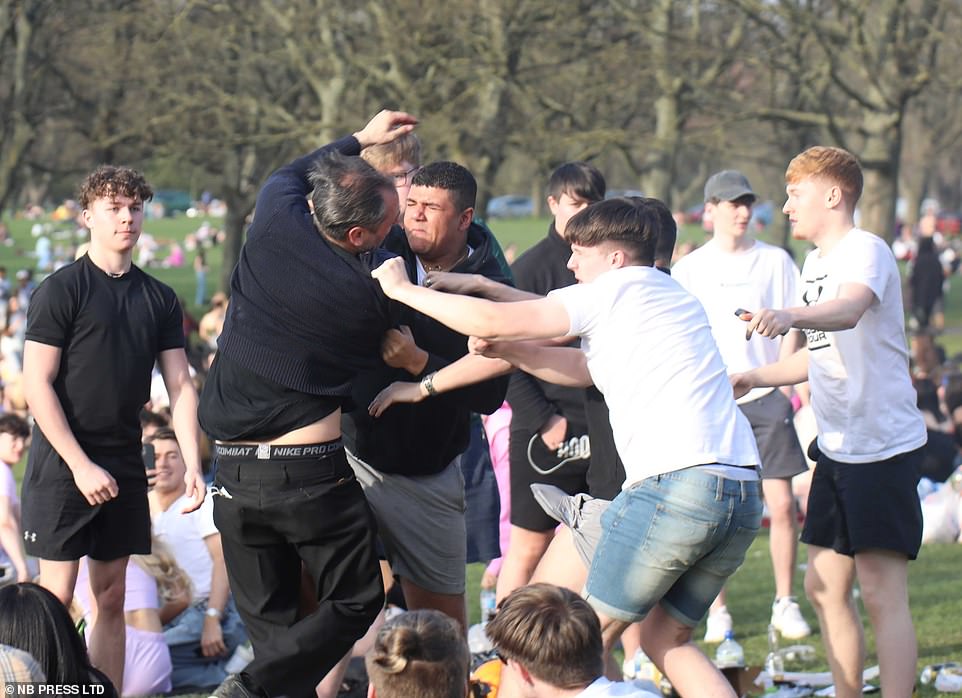 Rowdy revellers in Hyde Park in Leeds burst into a heat-fuelled fist fight as they gathered on the grass in the sun yesterday, as the mercury hit 75F (24C) in parts