EXCLUSIVE: Police foil suspected plot by eco-mob to cause mayhem at Queen’s funeral after fishing activist with a GoPro camera on his head out of the Thames

Police have foiled a suspected plot by an eco-mob to cause mayhem at the Queen’s funeral, MailOnline can reveal.

Officers from the Met fished an activist with a GoPro camera on his head out of the River Thames after he was caught paddling on a float close to the Houses of Parliament.

The hapless man in his 20’s was spotted in a no go area in the early hours as police began preparing for the biggest security operation the country has ever seen ahead of Her Majesty’s state funeral on Monday.

They swooped in after a concerned member of the public called 999 believing they had seen a body floating in the water at 3.25am on Monday. 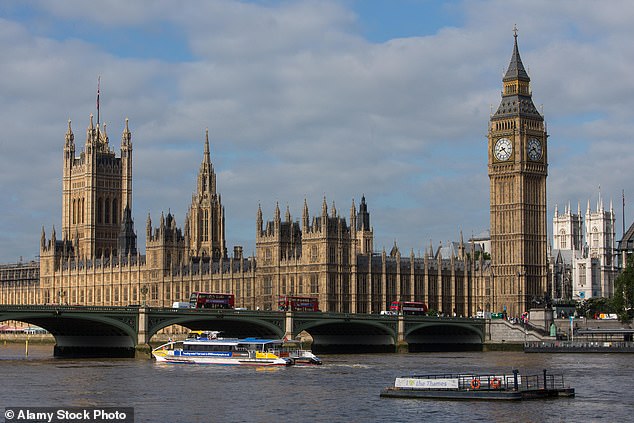 They found him swimming towards the shore before he scrambled up scaffolding only to be greeted by the waiting officers.

The soaking-wet suspect was wearing shorts and a t-shirt and had a dry bag containing a jumper and tracksuit bottoms.

When quizzed by officers he claimed he was in training for a charity swim.

They initially questioned him believing his antics could have been terrorist-related.

But a source said it became clear he was likely a member of a green protest group such as Extinction Rebellion or offshoot insulate Britain.

The source said it was believed the man may have been on a reconnaissance mission to gather information to disrupt preparations for the funeral on Monday.

Officers examined footage taken on the man’s camera but let him go with a ticking off due to a lack of evidence. 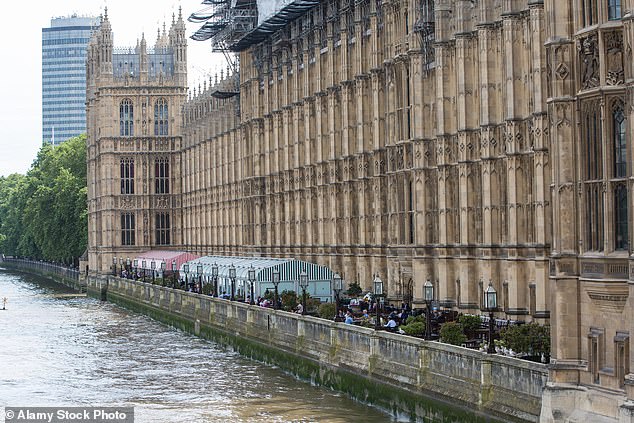 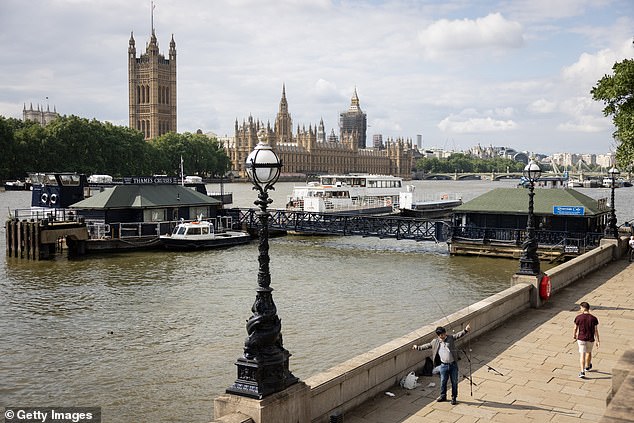 Police swooped in after a concerned member of the public called 999 believing they had seen a body floating in the water at 3.25am on Monday

The security breach happened just yards from Westminster Hall where the Queen’s body is now lying in state ahead of her funeral on Monday.

It came 24 hours before King Charles made his first address as monarch to both Houses of Parliament.

An RNLI lifeboat raced to the scene and police quickly arrived.

He was helped off the scaffolding which leads down into the water at Victoria Tower Gardens which is yards from Westminster Hall.

The source said: ‘He scrambled up the scaffolding – which he presumably used to get into the river – but police were at the top.

‘The footage on his Go-Pro showed potential ways to mount a water-borne raid on the Houses of Parliament and the annexed buildings including Westminster Hall and ways to get into the water.

‘Whatever his motives, his excuse of training for a charity swim was laughable.

‘He was read the riot act. Police reviewed the footage he had taken. It showed a no-go area outside the Palace of Westminster which is cordoned off buoys and patrolled by armed police in boats.

‘He had also videoed the walls on the side of the river, 50 yards from where the Queen’s body will lie, and possible access routes to it.

‘The officers came to the conclusion he was part of a team planning to protest over the next few days while The Queen lies in state at Westminster Hall.

‘They could even have been preparing to mobilise on the actual day of the state funeral day when her coffin will be taken from Westminster Hall.

‘But there was no actual hard evidence of what he was up to, so they had to let him go.’

A spokesman for Scotland Yard said: ‘At around 03.25hrs on Monday September 12, police became aware of a man in the River Thames who appeared to be using a flotation device.

‘He came out of the water at Victoria Tower Gardens. Officers spoke to him. He was given words of advice about his proximity to a restricted area. He was not arrested.’

It came as the Houses of Parliament was surrounded by a ring of steel as part of the biggest policing operation in history.

Up to 10,000 officers – including specialist teams – have been on duty each day as hundreds of thousands of people have been flooding into the capital in the run up to the Queen’s funeral on Monday.

Extra close protection and firearms teams have also been drafted in from forces outside London to help guard public figures and foreign dignitaries who are due to fly in to attend the funeral.

Plans include dealing with protest groups.

Metropolitan Police Deputy Assistant Commissioner Stuart Cundy said: ‘We know there are some people who want to protest on a range of issues even at this time of national mourning.

‘People have a right to freedom of expression and we must balance the rights of protesters with those of others who wish to grieve and reflect.’

Climate activists have previously brought the country to a standstill in a series of protests with tactics including glueing themselves to trains, marching through the streets and blocking cars and even ambulances on motorways. 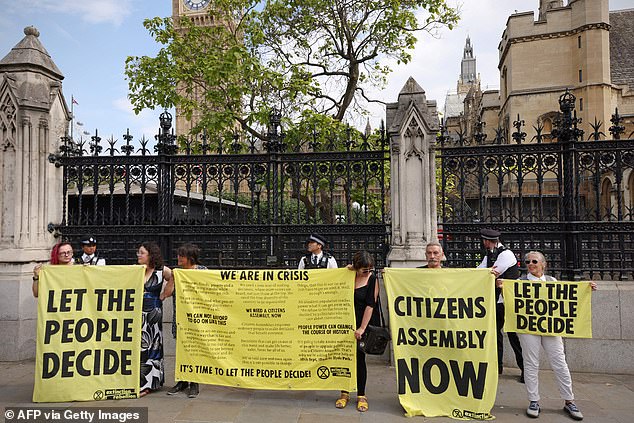 On the day the Queen died, Extinction Rebellion cancelled one major planned protest in Hyde Park until further notice.

Organisers said the ‘difficult decision’ had been made as it was felt it would not be ‘practical’ to go ahead with the protest as huge crowds and a massive police presence during the period of mourning would pose a risk to the groups ‘mobilisation efforts’.

Activists had organised a three day occupation of the Royal park in central London saying it was part of preparations for bigger demonstrations planned for next spring in which the group is hoping to mobilise 100,000 demonstrators.

Members of the group were scheduled to camp out from Saturday to Tuesday during the so-called ‘Festival of Resistance’ in an effort to recruit new activists.

Despite the move, XR Rebellion are planning a gathering this Sunday at Lincoln’s Inn Fields, two miles from Westminster.

Just days before the Queen died, activists from the group breached security at the Palace of Westminster by posing as tourists before supergluing themselves to the Speaker’s chair in the House of Commons chamber.

The protest on September 2, which involved around 50 Extinction Rebellion members, also saw an activist climb scaffolding near Westminster Hall, where the Queen is now lying in state, while two others used bike locks to chain themselves to the railings at the New Palace Yard entrance.

The Metropolitan Police made eight arrests and launched an investigation into the incident.

Insulate Britain has mounted a series of protests blockading motorways and ports since launching a campaign of civil resistance exactly a year ago.