A Leicestershire couple’s home Halloween display was deemed so spooky that the police asked them to remove some decorations that could cause ‘offence’.

Jo Flower, 37 and her husband Rob, 48, are known among their community in Rothley for marking events with audacious decorations.

They regularly transform the front of their house into incredible scenes for occasions such as Christmas, Easter and Halloween, but Leicestershire police decided this year’s effort had gone a step too far.

The couple, who are raising money for charity, say they’ve never had any problems in the past, but were on Saturday asked by police officers to ‘tone it down’, despite the decorations adorning their own home.

‘We do it every year, apart from last year, and we never have any problems,’ said Jo.

‘We’ve had amazing feedback this year – kids come to visit to get sweets and nurseries have come along to take pictures.

‘We’ve got nephews and nieces who love it too.’ 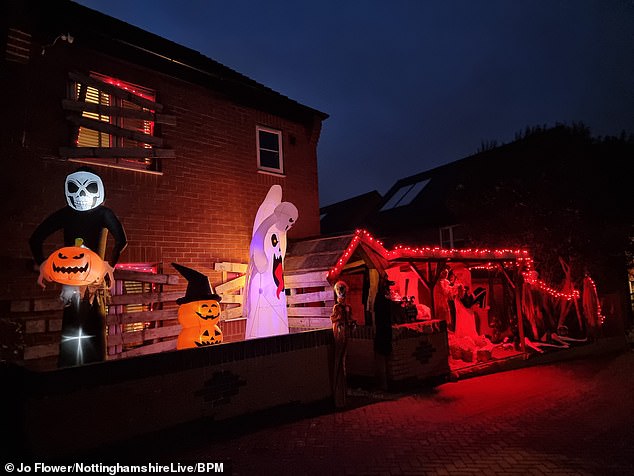 They regularly transform the front of their house into incredible scenes for occasions such as Christmas, Easter and Halloween, and this year introduced several blow-up scary figures along with various mannequins arranged in a series of spooky positions 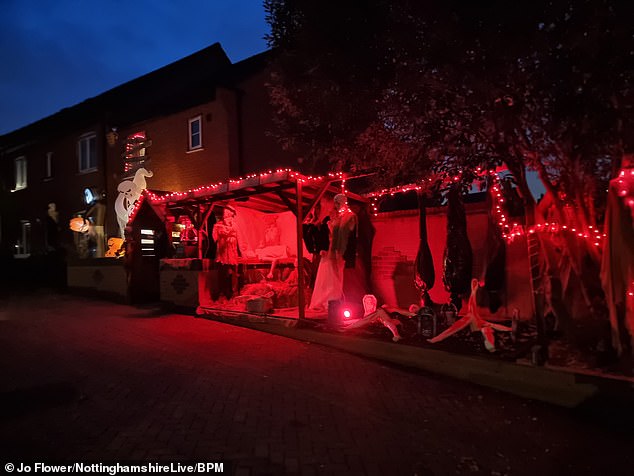 The decorations went too far this year in the eyes of Leicestershire police who told Jo to ‘tone down’ the display. Jo meanwhile objected to the police’s request, pointing out that her decorations were standing on her property and had received great feedback from the community

Jo objected to the police’s request, pointing out that her decorations were standing on her property and had received great feedback from the community.

‘Officers said they were given an anonymous tip-off and asked us to take it down, but it’s in our own front garden,’ Jo told Leicestershire Live.

The police’s reasoning was that some of the decorations could potentially offend members of the community according to Jo.

‘I don’t know why it would be a problem but police did say that one of the headless mannequins could cause offence,’ she said.

Jo even said some of her neighbours had been asking when the display would next be up, as the couple’s commitment to commemorating events had been quashed by the pandemic.

Decorating their house to celebrate holidays and occasions has long been a tradition at the Flower household.

But this year Jo and Rob decided to raise money for Cancer Research in conjunction with the display after a pair of bouts with cancer in the family.

Earlier this year, Jo faced the alarming news that he had precancerous cells in her uterus and just two weeks ago, underwent a hysterectomy.

The mother-of-two said despite the recent surgery she was ‘keeping well’ and given the ‘all-clear’ just two days prior to Halloween.

It comes after her mum had passed away after being diagnosed with cancer in 2018.

‘We decided that this year we would raise money for Cancer Research and raise some awareness,’ Jo said.

A fundraising page created by Jo and Rob has raised over £320 so far.

One hell of a hangover! Halloween revellers wake up with the fear after braving the weather to hit pubs and clubs up and down the UK

Halloween party-goers dressed up in their spookiest outfits on Saturday night as they braved the cold weather to hit their favourite hit pubs, bars and clubs up and down Britain.

Revellers in Leeds in particular were in the mood for fancy dress last night, with pictures overnight showing a variety of extravagant costumes – from angels and devils, playboy bunnies, superheroes, brides and a number of other fantastical characters.

Not to be out-done, the streets of London, Newcastle upon Tyne, Wigan and Birmingham were among many across the UK to be filled with people in spooky costumes to rival the scenes in the northeast. 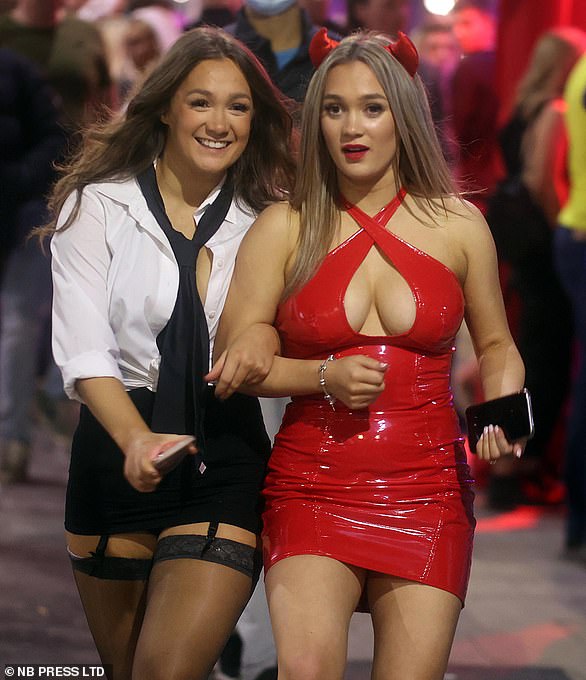 LEEDS: Two friends walk down the streets of Leeds on Saturday night as people up and down the country celebrate Halloween, despite the threat of rain and dropping temperatures 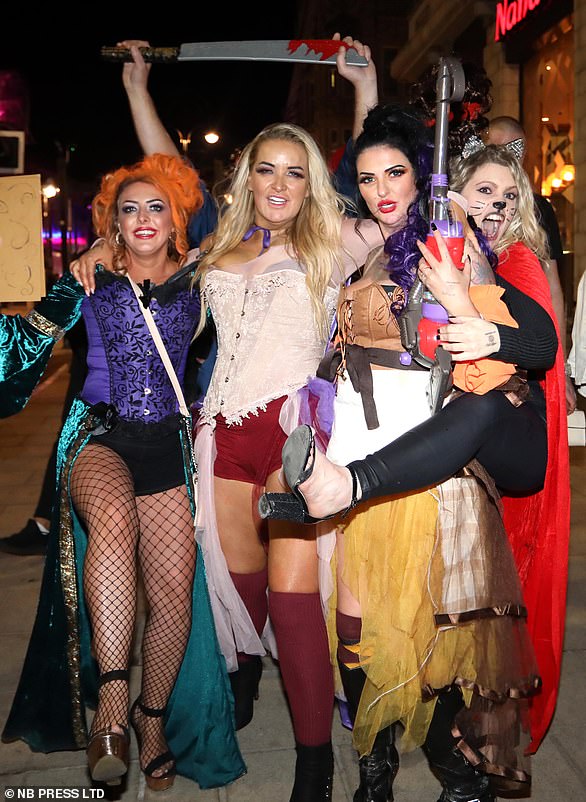 A group of friends are pictured wearing bright coloured corsets paired with shorts and tights, paired with bloody cleavers. One of the girls hilariously brought out a plastic hoover to go with her costume (Pictured)

The party-goers were able to enjoy an extra hour of Halloween fun overnight as daylight savings time came to an end and the clocks went back an hour at 2am.

Revellers braved the 44F last night in Leeds and dressed to impress whilst attending their favourite pubs and clubs.

It’s been more than a year since the Covid-19 pandemic where social interactions with other people were restricted, and many took to the streets to celebrate Halloween eve with a night on the town.

Many revellers across the UK were likely to have wet and windy journeys home with the Met Office warning that strong gusts coming in from the west will bring a ‘wild start’ to Sunday, with 70mph winds during the first week of November.