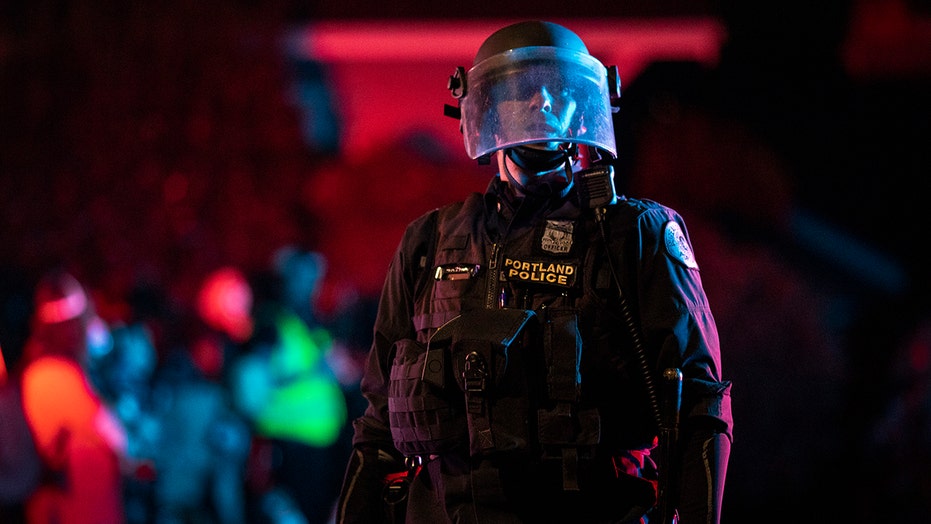 Police in Portland urged a crowd of about 200 people that had marched on a Portland Police Association (PPA) building late Monday to move away and stop attempts to damage the property.

Authorities determined that people near the PPA building in the city's North Lombard street  – which has been targeted with vandalism and fire on numerous occasions – “may be attempting to force entry into the building."

"Failure to follow this order may subject you to the use of crowd control agents, including, but not limited to tear gas and/or impact weapons," police said.

The organized demonstration had left a local park around 10 p.m. before a crowd of 100 people marched on the building while declaring the need for justice. Video taken of the march saw many allegedly chanting that if they didn't get justice, they would "burn it down!" a reporter with Portland's KOIN tweeted.

When the group arrived at the building, it had grown to about 200 people. Protest cars blocked traffic on Lombard Street as music and speeches blared over a loudspeaker during the 82nd night of unrest in the city. Others started to spray-paint the plywood that surrounds the PPA building.

A few people would break off from the crowd and smash a small window near the rear of the building, and a least one person tried to get inside, according to the station.

Video taken of the building in the city’s North Lombard Street appeared to show that a window had been damaged, KOIN reported. Police would issue a warning on a loudspeaker directed at protesters. Just before 11 p.m., demonstrators were ordered to move so officers could check on the damage.

Upon issuing the warning, about two dozen officers arrived and formed a line near the building’s side entrance. When officers later retreated, someone in the crowd threw a bottle at police, who responded by releasing smoke and fired pepper balls, according to The Oregonian.

Letha Winston, the mother of a 27-year-old man who was killed by police after he had shot and wounded two others back in 2018, suggested that standing around wasn't enough to create change. She urged protesters to march through the city's residential neighborhoods instead of congregating outside the PPA building, the paper reported.

“Sitting down ain’t getting justice,” she said.

Police have responded forcefully at times during the nearly three months of protests, which now have the absence of federal agents. Authorities have often declared the assemblies unlawful in response to demonstrators throwing objects or pointing lasers at police officers.

Late Sunday, violence erupted in Portland just blocks from the federal courthouse after the driver of a pickup truck crashed, was reportedly pulled from the vehicle, and then brutally beaten by a mob after a confrontation with protesters.