JEFFREY Epstein's horrific sex trafficking network has been laid bare in court documents as one of his victims is suing Prince Andrew after she was allegedly forced to have sex with the Duke.

Documents filed by Virginia Roberts Giuffre's legal team include a map compiled from Epstein's flight logs which show how the globe-trotting paedo would crisscross the Atlantic. 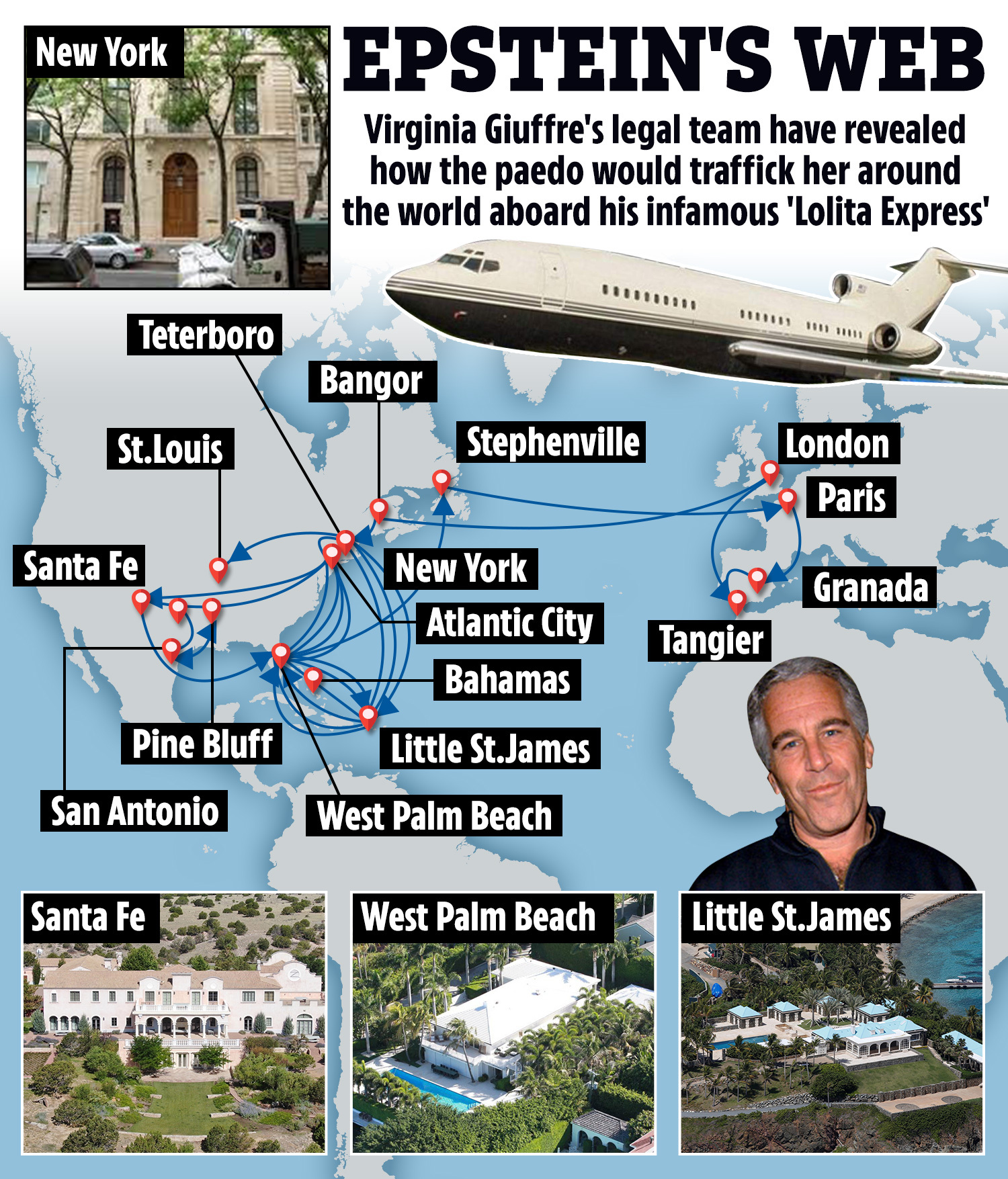 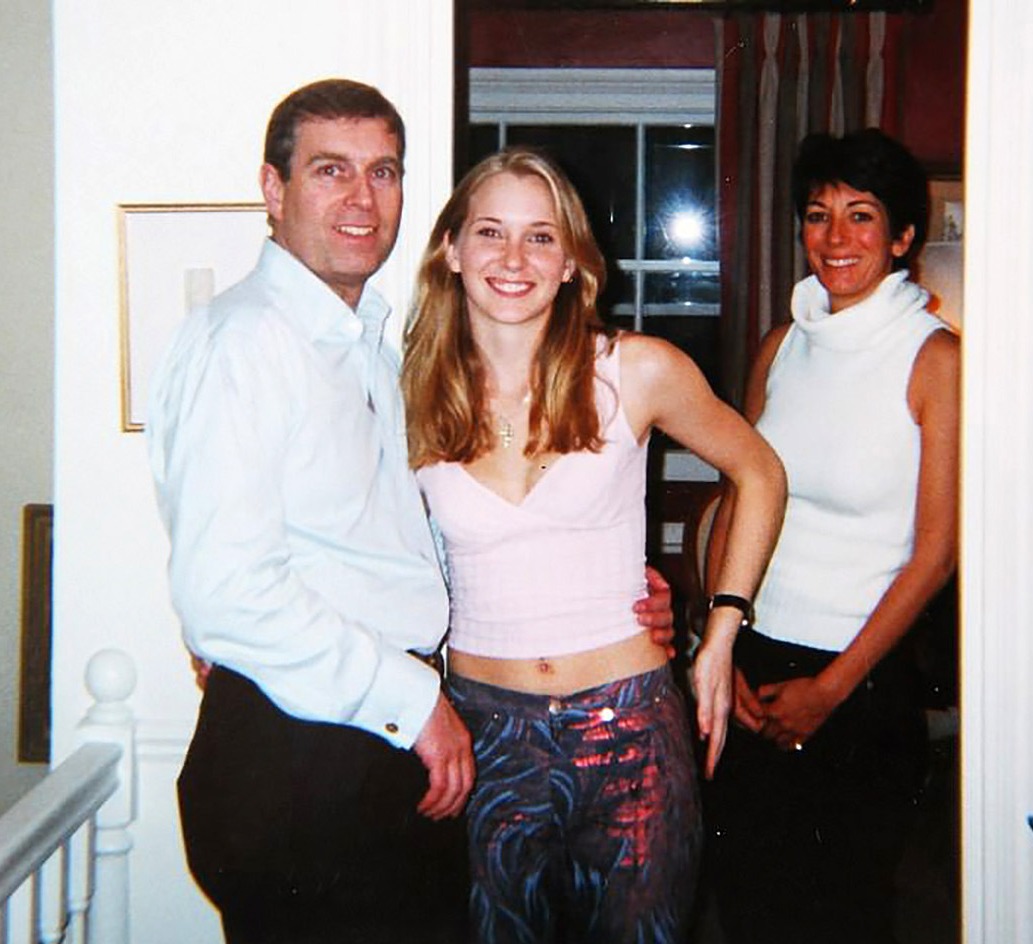 Epstein would fly between his homes in New York, Palm Beach, the US Virgin Islands and Santa Fe aboard his private jet, which would later become known as the "Lolita Express".

And the vile billionaire would bring Virginia – along with other young girls – aboard so he could abuse them, and allegedly offer them up to his powerful pals.

The map – published of page seven of the 15 page docket – was created using publicly available flight logs which detail when Virginia was flying with Epstein, often when she was under the age of 18.

It shows the plane darting between the US, the Caribbean and Europe, with most travel centred around Epstein's lavish properties.

Legal papers note that this web is believed to just be a fraction of the international trafficking Epstein subjected Virginia to.

Locations listed on the map include Epstein's multi-million dollar homes along with London, Paris, the Bahamas, Granada and Tangier.

Epstein's pilot has previously separately claimed he once saw Prince Andrew on board one of the billionaire's jets with Virginia.

The now 38-year-old filed the lawsuit against The Duke of York after she alleges she was trafficked to him in London to have sex with him.

She also claims she was abused by the Queen's youngest son in New York and on Epstein's island Little St James.

🔵 Read our Prince Andrew live blog for the latest updates

Andrew fiercely denies any allegations, says he has no memory of even meeting Roberts, and has said he had no suspicions of Epstein's wrongdoing during their friendship.

It is the first time the Prince has been subject to litigation over the allegations.

Epsteinand his so-called "madam" Ghislaine Maxwell are said to have recruited Virginia while she was working at Donald Trump's club Mar-a-Lago – luring her in under the pretense they would train her as a masseuse.

However, she found herself being sucked into a disturbing world of sexual abuse, power and extraordinary wealth.

[It] illustrates the international scope of Epstein’s sex trafficking

"Epstein also flew Plaintiff on his plane nationally and internationally numerous times when she was under the age of 18," legal papers read.

"Only portions of the flight logs of Epstein’s private planes have yet been recovered, and Epstein also flew Plaintiff frequently on commercial airlines to meet him and others.

"However, the chart below, which shows Plaintiff’s flights on Epstein’s private plane from the limited logs that are available, illustrates the international scope of Epstein’s sex trafficking."

Filed yesterday in the the Southern Distrct court in New York, the lawsuit against Andrew describes the intricacies of Epstein's "sex-trafficking enterprise" .

Epstein used his "seemingly unlimited wealth and resources, to create a web of transcontinental sex trafficking that served himself, his coconspirators, and some of the most powerful people in the world."

Virginia claims she was "lent out" by Epstein to "other powerful men for sexual purposes" – and the lawsuit states him and Maxwell would "actively recruit underage girls". 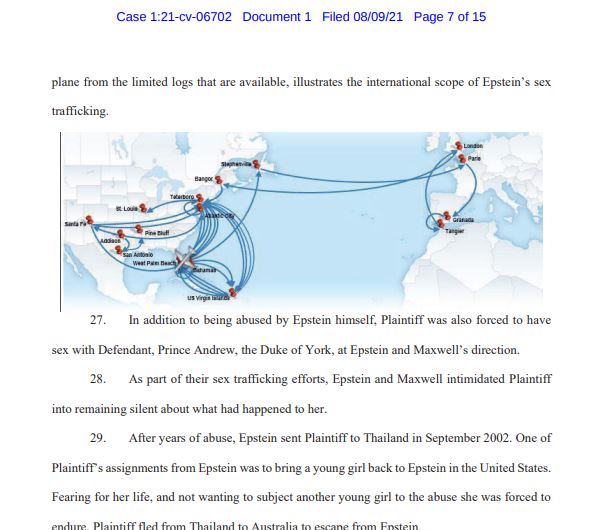 Maxwell and Epstein's other recruiters would target victims "anywhere, including schools, spas, trailer parks and the street" as they sought out vulnerable girls who they could exploit.

"Epstein had perfected a scheme for manipulation and abuse of young females," it reads.

Epstein would brag about his wealth and power to both impress and intimidate his victims – and would keep them living in fear with threats and constant survllience.

Virginia was ordered to go to Thailand in September 2002 on "assignment" to bring Epstein back a "young girl", and she then used this to escape – moving to Australia as she feared for her life.

The lawsuit then goes on to detail Andrew's alleged friendship with Epstein, claiming the Duke met the paedo in 1999 through Maxwell and that same year begun to fly on his private plane.

Andrew's name appears on flight log entries around this time – and he is listed in Epstein's so-called "Black Book" of powerful people, along with12 phone number, the documents state.

Virginia alleges she was compelled through threats and fear for life to have sex with the Duke.

Her legal team argue she was a "frightened, vulnerable child with no one there to protect her" when she was allegedly abused by Epstein, Maxwell and Andrew.

Andrew is the only named defendant in the new lawsuit, but the documents make repeated mentions of Epstein and Maxwell.

The Duke allegedly engaged in the sexual acts without Ms Giuffre's consent, while aware of her age and while "knowing that she was a sex-trafficking victim", the documents claim.

The docs add the alleged assaults "have caused, and continue to cause her, significant emotional and psychological distress and harm".

"Prince Andrew's actions, described above, constitute extreme and outrageous conduct that shocks the conscience," the lawsuit stated as it described the emotional distress suffered by Ms Giuffre.

"Prince Andrew's sexual abuse of a child who he knew was a sex-trafficking victim, and when he was approximately 40 years old, goes beyond all possible bounds of decency and is intolerable in a civilised community," it added.

The Duke has not yet commented on this new lawsuit, but he is believed to not be able to invoke diplomatic immunity over the case.

However, US officials have previously insisted they are not seeking to extradite Andrew. 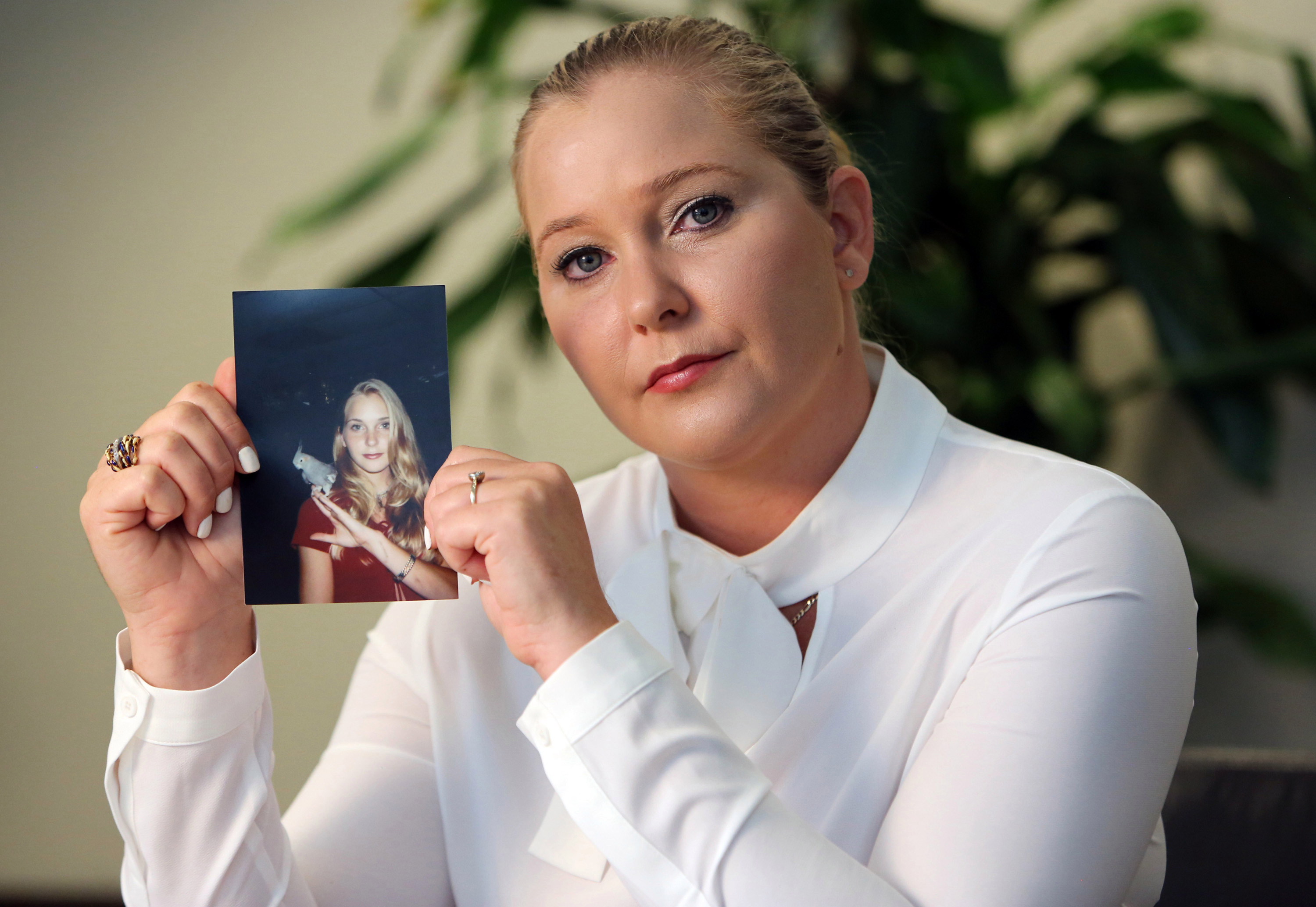 In a previous statement, the Palace said: "It is emphatically denied that The Duke of York had any form of sexual contact or relationship with Virginia Roberts.

"Any claim to the contrary is false and without foundation."

Ms Giuffre’s lawyers claim that they have made multiple attempts to contact the Duke and his legal team but have been ignored.

And the documents accuse Andrew's team of "vile and baseless" attacks towards her and others.

The documents claim the counsel for victims of Epstein's trafficking have made requests for a telephone call with Andrew or his representatives, he has "rejected all such requests".

"In this country no person, whether President or Prince, is above the law, and no person, no matter how powerless or vulnerable, can be deprived of the law’s protection," the docs state.

"Twenty years ago Prince Andrew’s wealth, power, position, and connections enabled him to abuse a frightened, vulnerable child with no one there to protect her.

"It is long past the time for him to be held to account."

In an infamous Newsnight interview with the BBC's Emily Maitlis in November 2019, Andrew denied claims that he slept with Ms Giuffre and said he had "no recollection" of ever meeting her.

He also said he has no memory of the well-known photograph of him with his arm around Ms Giuffre's waist at Maxwell's house, and has questioned whether it was his own hand in the image.

The fallout from the interview saw the royal criticised for showing a lack of empathy towards Epstein's victims and a lack of remorse over his friendship with disgraced financier.

Andrew quit his royal duties and publicly promised to co-operate with US authorities investigating Epstein's crimes, though has since faced a war of words between his camp and American authorities over his availability to answer questions.

In a statement Ms Giuffre, who lives in Australia, said: "I am holding Prince Andrew accountable for what he did to me. The powerful and the rich are not exempt from being held responsible for their actions.

“I hope that other victims will see that it is possible not to live in silence and fear, but one can reclaim her life by speaking out and demanding justice.

"I did not come to this decision lightly. As a mother and a wife, my family comes first. I know that this action will subject me to further attacks by Prince Andrew and his surrogates.

“But I knew that if I did not pursue this action, I would be letting them and victims everywhere down.”