London: It was the scene of the royal brothers’ greatest tragedy; the backdrop to their darkest hour as they learnt of the death of their mother, Diana, Princess of Wales, 25 years ago.

The added poignancy of Queen Elizabeth II passing away at her beloved Balmoral will not have been lost on princes William and Harry as they raced to their grandmother’s Scottish home in her final hours on Thursday. 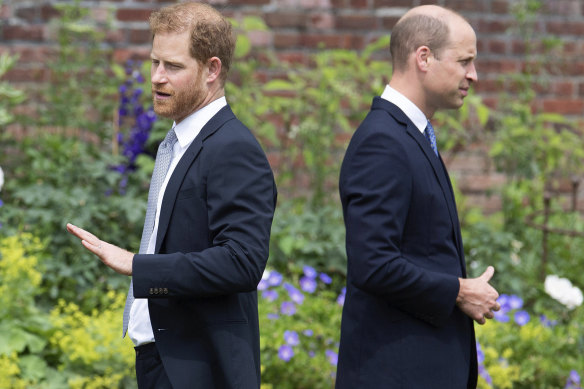 Prince Harry, left, and Prince William stand together during the unveiling of a statue they commissioned of their mother Princess Diana in 2021.Credit:AP

If the once inseparable siblings were to patch up their differences anywhere, then surely the heather-strewn wilds of Royal Deeside would provide the perfect conditions for a timely rapprochement?

Yet in being the last to arrive at the baronial castle – and the first to leave in the morning, the extent of Harry’s defenestration from The Firm could not appear more marked.

Matters moved so quickly on Thursday that Harry was unable to fly in the same private jet as his brother, the Duke of Cambridge; his uncle Prince Andrew, the Duke of York; and his uncle Prince Edward and his wife Sophie, the Earl and Countess of Wessex – even though he was also making the 600 kilometre journey from Windsor.

While William flew up at his father’s behest – for constitutional as well as familial reasons – the London Telegraph has learnt that Harry was not summoned, but took the decision to travel to Scotland after Buckingham Palace announced that the Queen was under medical supervision following doctors’ concerns. 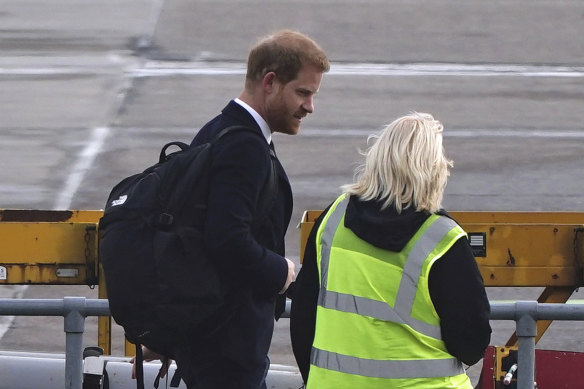 Prince Harry walks towards a plane at Aberdeen airport to travel back to London.Credit:PA

Flying on one of the Dassault Falcon 900LX jets that convened Boris Johnson and Liz Truss to Balmoral on Tuesday for the prime ministerial handover, William, Andrew, Edward and Sophie apparently thought they would make it in time – with William and his father even thinking they would be able to host the virtual Privy Council meeting the Queen had missed on Wednesday in their capacity as Counsellors of State.

Forced to charter a Cessna 560XL from Luton in the absence of any appropriate scheduled flights, Harry arrived at Balmoral at 8pm, an hour and a half after Buckingham Palace announced the 96-year-old monarch had died peacefully that afternoon.

It also goes some way to explaining why he had such an early start on Friday. Had he returned on a private jet, he would have been afforded the luxury of a later departure time, but instead left Balmoral at 8.30am to catch a 10am British Airways flight back to London Heathrow. Had he been on better terms with his nearest and dearest, he may have left at lunchtime, when William, 40, departed.

But as has been well documented since he and Meghan stepped down from royal duties in March 2020, relations between the couple and the rest of the House of Windsor remain strained, not least after Meghan’s salvos in a podcast and a 6500-word interview with The Cut, in which she warned the royal family that she was “free to say anything”. Having claimed that Harry “lost” his father in the “Megxit” process and suggested that “just by existing” she and her husband “were upsetting the dynamic of the hierarchy” she appeared to fan the flames of last year’s Oprah Winfrey interview by declaring that it was taking “a lot of effort” to forgive her in-laws. 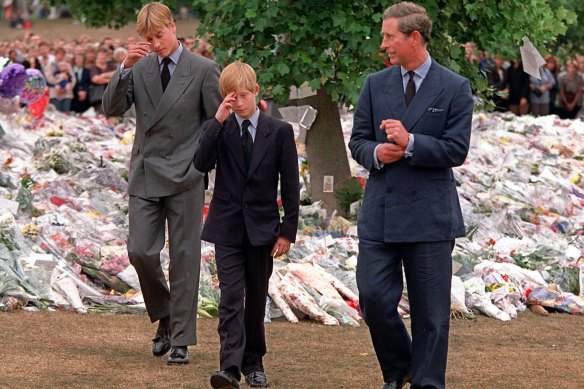 William and Harry are accompanied by Charles as they inspect the flowers placed outside Kensington Palace in memory of DianaCredit:AP

The outbursts – combined with an autobiography Harry promises will be “accurate and wholly truthful” – has understandably made the royal family reluctant to be in the couple’s company. As one royal insider put it: “It’s quite hard to spend too much time with someone you know is about to publish a tell-all book about you. I think people appreciate that the Queen was Harry’s beloved grandmother, but she was the CEO of the institution they have spoken negatively against”.

Having cut a lonely figure as he was driven into Balmoral, hand against his furrowed brow, to join his estranged family in mourning the Queen’s death, he was alone again as he made his way back to Windsor, where his wife Meghan, 41, is understood to have been waiting for him at their Frogmore Cottage home in the UK.

The couple’s spokesman had initially said the couple would travel together to Scotland, although separately from the rest of the royals.

But less than 30 minutes later, an unnamed source was quoted as saying that Harry would be making the trip by himself. Omid Scobie, the Sussexes’ self-styled unofficial spokesman, suggested afterwards that Meghan was “staying back in England like [Catherine] the Duchess of Cambridge” but as the BBC’s veteran royal correspondent Nicholas Witchell pointed out: “She might not be terribly warmly welcomed, to be perfectly candid about it.” 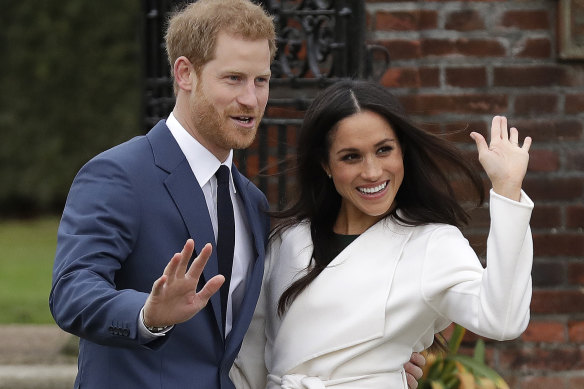 Harry and Meghan now live in California with their son Archie.Credit:AP

With Catherine, 40, having opted to personally break the news of “Gan Gan’s” death to Prince George, nine, Princess Charlotte, seven, and four-year-old Louis at the end of their first day at Lambrook Prep, their new school, it would have looked odd had Meghan had been present at Balmoral – but not the wife of the heir to the throne, a future Queen in her own right.

Despite an insistence from the Sussexes’ people that they were working “in coordination with the royals”, the about-turn reflects a growing sense that communications have all but broken down between the couple and the palace.

Whereas once the so-called “men in grey suits” included Harry in their planning – ensuring that he was factored into the official arrangements for the funeral of his grandfather, Prince Philip, the Duke of Edinburgh, in April last year, now the father of two appears to have been largely left to his own devices.

The approach may change as the royal household manages the many moving parts involved in coordinating attendance at her majesty’s funeral in 10 days time – but it is fair to say the couple’s presence remains a significant cause for consternation – not just among staff but the family itself.

As one well-placed source put it: “I think the general reaction to Harry and Meghan’s behaviour has been one of incredulity, to be honest.

“Even if you just look at the last few weeks, they’ve had the duchess once again making outspoken remarks in interviews.

“They seem quite detached from reality, living in a sort of LA bubble. It is incredible really.”

It is not confirmed if Meghan and Harry will stay in the UK until the state funeral, expected to be on Monday, September 19, or return to the US to see their children Archie, three, and one-year-old Lilibet having already been away from them for a week, although Scobie has insisted that Harry will “of course” remain in Britain. A spokesman declined to comment on their plans.

Meghan did not attend Philip’s funeral because she was seven months pregnant with Lilibet. However, an olive branch was extended by the King on Friday as he mentioned the Sussexes and his love for them in his speech.

During the ceremony for Philip at St George’s Chapel in Windsor, William and Harry were reunited for the first time since the Sussexes appeared on Oprah a month earlier, when they accused a member of the royal family of being racist towards Archie.

Their cousin Peter Phillips, the late Queen’s eldest grandchild, acted as peacemaker, a role he could fulfil again, according to one insider.

“Peter is used to acting as a bit of a buffer,” said the source. “He may play that role again in a bid to pull them along together.” Meghan’s attendance at the funeral is one of several conundrums facing the palace powers that be.

When the Queen Mother died, a then Prince Charles, Prince Andrew, Prince Edward and their cousin David, Viscount Linley stood guard by her coffin for 20 minutes before they were relieved by the Yeoman of the Guard. This “Vigil of the Princes” is set to be repeated by her four children when Queen Elizabeth lies in state – but it is yet to be confirmed whether her grandchildren will also take part in their own vigil. Will Harry be invited to be in it, and if so, what will he wear?

If included then he can, with his father, the King’s permission, wear his old uniform of the Blues and Royals – even though he no longer has any official military ties. (There will also be consternation about the disgraced Prince Andrew, the Duke of York’s presence – and what uniform or not – he might wear now he has stepped down from public life).

It is also to be decided whether Archie and Lilibet will use the HRH titles automatically granted now their grandfather is King. Under a Letters Patent issued in 1917 by George V, all grandchildren of the sovereign are able to enjoy the HRH designation and a royal title. But since Harry and Meghan have been told not to use their HRH style since they left the royal family, it may look strange for their children to do so.

A question mark also remains over whether Meghan’s next Spotify podcast will be broadcast as planned on Tuesday or whether Harry’s autobiography will still be published before Christmas. It would seem that the Queen’s death has done little to close the book on the Sussexes’ ongoing rift with the Firm.