Captain Wales honours his Commander In Chief: Finally in his military uniform, Prince Harry’s sombre gesture for The Queen

Prince Harry, finally in his military uniform, carried out a sombre guard of honour for the Queen this evening.

The Duke of Sussex stood guard at the Queen’s lying in state in Westminster Hall on Saturday evening as a stream of mourners filed past after queueing for hours.

Captain Wales, as he was known in the army, joined his brother Prince William, the Prince of Wales, in military uniform for the 15-minute vigil.

Prince Harry, who saw action on the front line during two tours of duty in Afghanistan, has previously been denied the chance to wear his military uniform as he publicly mourns, because he is no longer a working royal.

But royal sources said the King decided his youngest son could wear uniform for the vigil. 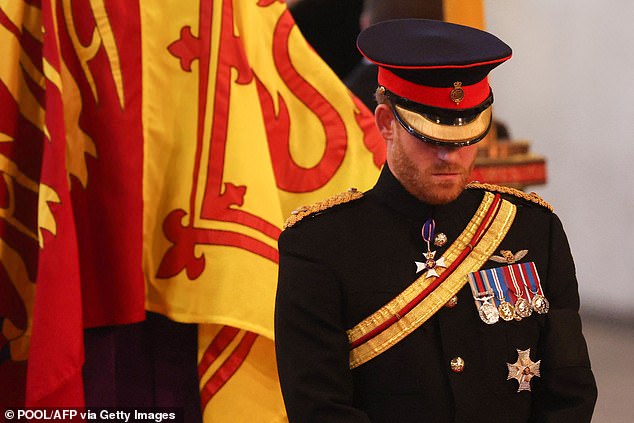 Britain’s Prince Harry, Duke of Sussex, mount a vigil around the coffin of Queen Elizabeth II 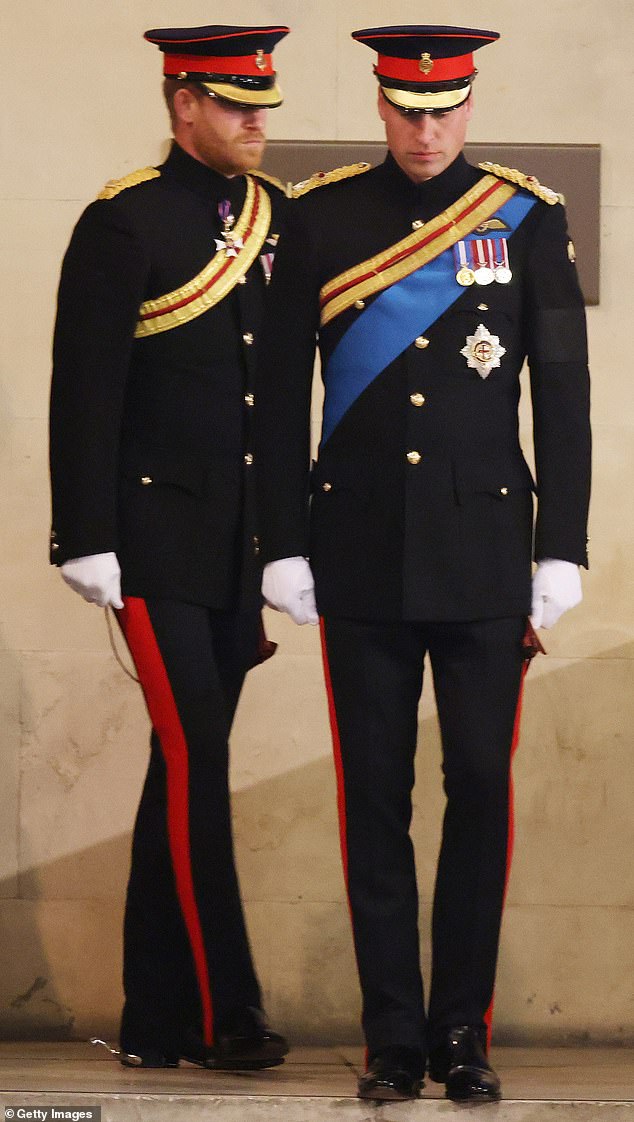 Prince William, Prince of Wales, Prince Harry, Duke of Sussex arrive to hold a vigil in honour of thier grandmother 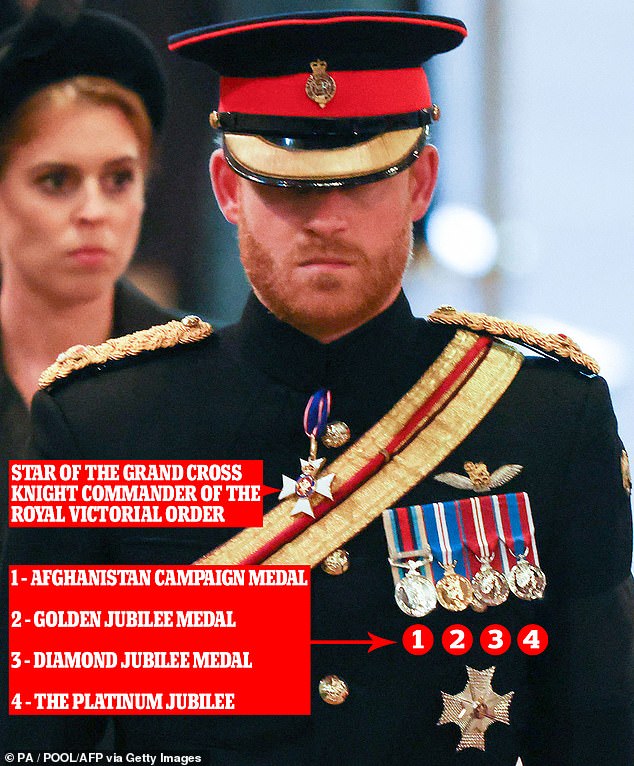 Duke of Sussex’s tribute to the Queen in full

Here is the statement released by the Duke of Sussex in full.

‘In celebrating the life of my grandmother, Her Majesty The Queen – and in mourning her loss – we are all reminded of the guiding compass she was to so many in her commitment to service and duty.

‘She was globally admired and respected. Her unwavering grace and dignity remained true throughout her life and now her everlasting legacy.

‘Let us echo the words she spoke after the passing of her husband, Prince Philip, words which can bring comfort to all of us now: ‘Life, of course, consists of final partings as well as first meetings.’

‘Granny, while this final parting brings us great sadness, I am forever grateful for all of our first meetings – from my earliest childhood memories with you, to meeting you for the first time as my Commander-in-Chief, to the first moment you met my darling wife and hugged your beloved great-grandchildren.

‘I cherish these times shared with you, and the many other special moments in between. You are already sorely missed, not just by us, but by the world over. And as it comes to first meetings, we now honour my father in his new role as King Charles III.

‘We, too, smile knowing that you and grandpa are reunited now, and both together in peace.’

Despite being a former Army officer, Harry has been in civilian dress for official events this week, including walking behind the Queen’s coffin on Wednesday.

On Monday, the Duke recalled his ‘first meeting’ with his grandmother, the head of the armed forces, in 2006 when he was commissioned as an officer.

He dubbed the late monarch his ‘Commander-in-Chief’ in his tribute.

‘Granny, while this final parting brings us great sadness, I am forever grateful for all of our first meetings – from my earliest childhood memories with you, to meeting you for the first time as my Commander-in-Chief, to the first moment you met my darling wife and hugged your beloved great-grandchildren,’ he wrote.

The tribute references the moment the Prince, then 21, smiled at his grandmother as they spoke at the Royal Military Academy Sandhurst, in Surrey.

In pictures from the moment, Prince Harry could be seen blushing as they spoke.

The Duke joined the Household Cavalry’s Blues and Royals as 2nd Lieutenant Wales — a rank referred to as Cornet in the regiment.

He then became a Captain and served for 10 years in the British Army. This included two frontline tours to Afghanistan.

The Duke lost his honorary military titles after he and wife Meghan Markle decided to stop being senior working royals.

This included the title Captain General of the Royal Marines.

However he still possesses the title he earned during his military service.

Prince William was wearing the Blues and Royals, No.1 Uniform, The Garter Sash, The Garter Star, Golden, Diamond and Platinum Jubilee medals and RAF Pilot Wings.

The brothers were joined in their silent tribute around the coffin by cousins Zara Tindall and Peter Phillips, Princesses Beatrice and Eugenie, and Lady Louise Windsor and her brother Viscount Severn. 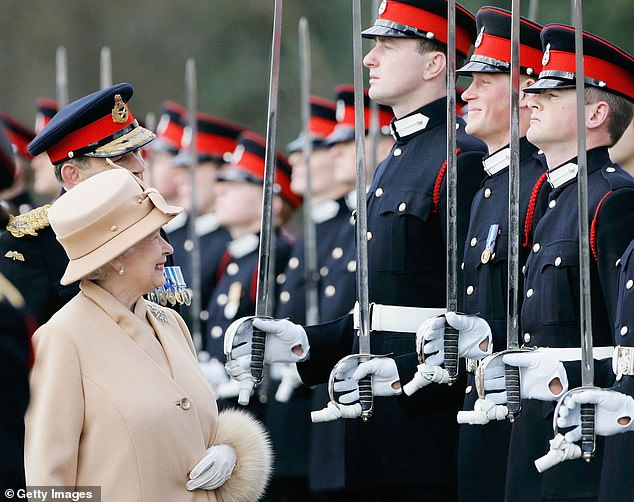 On Monday, the Duke recalled his ‘first meeting’ with his grandmother, the head of the armed forces, in 2006 when he was commissioned as an officer (pictured) 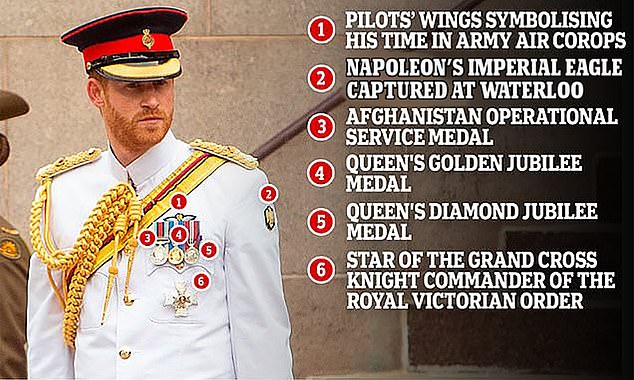 2002 – Awarded the Queen’s Golden Jubilee Medal, which was given to everyone who was in active service on February 6 2002 and had been in the forces for five years

2008 – Received an Operational Service medal to mark his service in Afghanistan.

2012 – Awarded the Queen’s Diamond Jubilee Medal, which was awarded to all those in the Armed Forces, emergency services, prison services and members of the Royal Household.

2015 – Knighted by his grandmother for his service and was made a Knight Commander of the Royal Victorian Order (KCVO).

Members of the public continued to file past while the Queen’s grandchildren stood guard, with some women wiping tears away from their face as they left the hall.

Prince William led the group away from the coffin, followed by Zara and Peter, Louise and James, Beatrice and Eugenie, and finally Harry.

As the royals returned to their cars, Zara appeared to be linking arms with Harry, while Peter, Louise and Beatrice were walking along together.

Last night, King Charles and his siblings, Princess Anne and Princes Andrew and Edward mounted their touching final vigil for the Queen, before the late-monarch is laid to rest on Monday.

They were all dressed in uniform, with an exception made for disgraced Andrew, who is no longer a working royal, to wear his military uniform as a ‘special mark of respect’ for the Queen.

As tearful mourners watched on, the Queen’s four children stood guard of their mother’s coffin for more than 10 minutes at Westminster Hall on Friday evening. The siblings each guarded a side of the coffin, with Charles, dressed in a Navy Admiral uniform, standing at the head.

It was their second, and final, vigil for the beloved monarch. Known as the ‘Vigil of the Children’ – an honour dating back to the time of George V – it mirrors a previous event held earlier this week at St Giles’ Cathedral in Edinburgh.

However, unlike the previous vigil in which Charles donned a kilt and Andrew a morning suit, all four siblings were dressed in military colours. 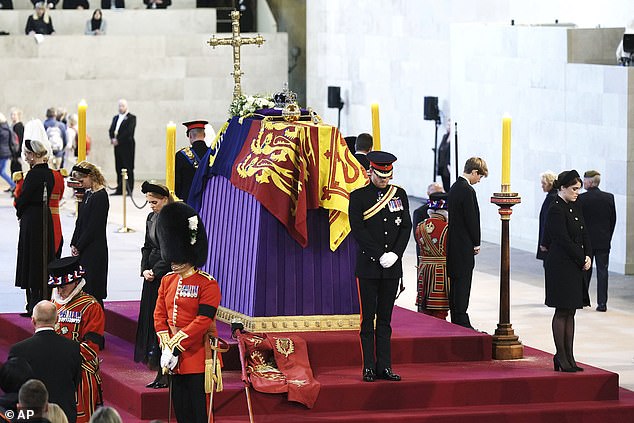 The Duke of York was given special dispensation to wear uniform at the vigil, as a ‘final mark of respect’ for his mother.

He was stripped of his armed forces patronages earlier this year amid a sexual abuse lawsuit in the United States, allegations he denied, had previously been banned from wearing military colours at public events.

He wore the full military dress uniform of a Vice Admiral of the Navy, a title which he earned from his years serving in the Navy – including in the Falklands War.