The Office of Public Prosecutions will not appeal the sentence handed to a man who dragged a woman into an alleyway in Melbourne's CBD.

Jackson Williams, 21, was found guilty of common law assault following a judge-alone trial earlier this year after he grabbed a woman from behind and dragged her into Brights Place, off Little Lonsdale Street, in 2018. 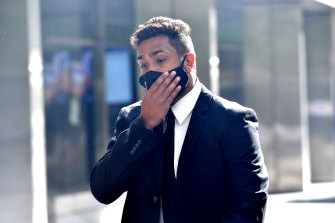 He put his hand over her mouth as he lay on top of her during the terrifying 37-second ordeal. The case attracted significant public attention after the court released CCTV footage of the incident.

The 21-year-old was found not guilty of intent to commit a sexual offence.

He was sentenced by County Court Judge Amanda Fox in November to 42 days in prison, which he had already served, and a 2½-year community corrections order.

On Wednesday, the Office of Public Prosecutions released a statement saying the case had been "carefully reviewed" and they would not appeal the sentence.

"In performing this review one of the matters considered was whether the sentence imposed for common assault fell outside the range of sentences available for this offence," the statement read.

"In this case it was determined that the sentence did not fall outside the range of available sentences.

"Taking this and all other matters into account the Director has decided not to appeal the sentence."

In November, lawyers for both the prosecution and defence argued that a community corrections order was a sufficient sentence for the crime.

At the time, prosecutor Stephanie Clancy said that sentencing Williams to a community corrections order would not be manifestly inadequate.

In sentencing Williams last month, Judge Fox found that community backlash, which included death threats and vigilante justice, were punishments "well beyond those required or permitted by law".

She said she had taken into account the significant community response that Williams and his grandparents were exposed to when his offending was brought to light.

"Public condemnation is to be expected," Judge Fox found. "However, when such matters are exposed in the media, an offender may pay a price that goes beyond public opprobrium.

"One such price is where, such as here, the attention results in death threats, racial abuse, and vigilante behaviour … Your grandparents' house, where you live, was attacked in the early hours of the morning by offenders armed with baseball bats. Windows were smashed and I'm told the police are investigating.

"In this way, I am satisfied you have been the recipient of punishments well beyond those required or permitted by law. The resulting death threats and attack on your grandparents' house are a form of extra-curial punishment to which you have been unfairly subjected."

Following the sentence, Emmaline Jones, a nurse who started a petition urging prosecutors to appeal the verdict handed down last month, said the sentence was too lenient and represented "a really sad and scary day for women".

Catch all the day’s headlines

At the end of each day, we’ll send you the most important breaking news headlines, evening entertainment ideas and a long read to enjoy.  Sign up here.