Vladimir Putin and Xi Jinping have vowed to ‘safeguard both sides’ security and interests’ as the pair hailed their friendship amid increasing tensions with ‘international forces’.

The world leaders held a phone call amid increasing criticism from the West, just days after G7 foreign ministers discussed Moscow’s sabre-rattling against Ukraine and Beijing’s crackdowns in Hong Kong and Xinjiang.

Putin hailed Russia’s ‘model’ relations with China and confirmed he would attend the Beijing Winter Olympics.

The Kremlin said after the call: ‘Both stated that the relationship had reached an unprecedented high level.’

‘In February we will finally be able to meet in person in Beijing,’ Putin said in a television broadcast of the conversation, calling Xi his ‘dear friend’. 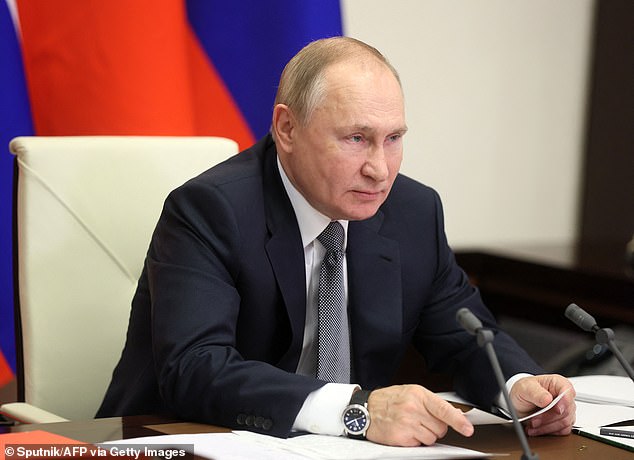 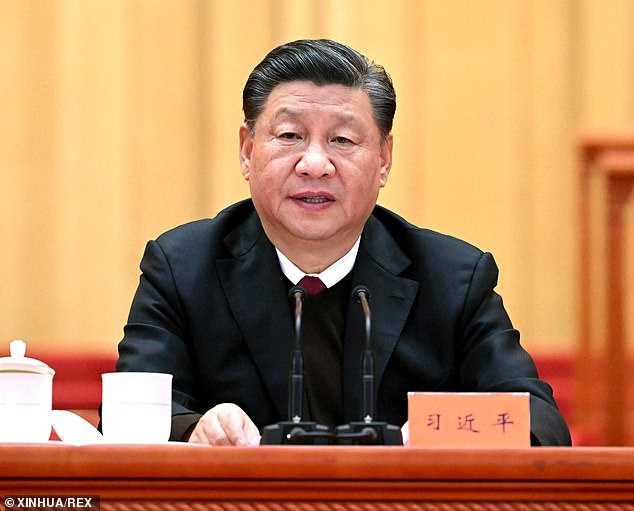 The United States, Britain, Canada and Australia are not sending political representatives to the Olympics 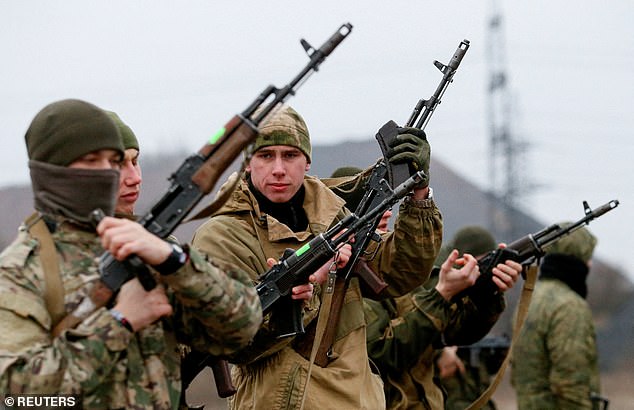 He also accused ‘international forces’ of meddling in China and Russia in the name of democracy and human rights and ‘grossly trampling’ on international law, according to a Chinese foreign ministry statement.

‘China and Russia must develop more joint actions to more effectively safeguard both sides’ security and interests,’ the statement added.

The United States, Britain, Canada and Australia are not sending political representatives to the Olympics over China’s abuse of Uyghurs and other mostly Muslim minorities in Xinjiang.

Beijing and Moscow denounced the diplomatic boycott and Putin on Wednesday said both leaders opposed ‘any attempt to politicise sport and the Olympic movement’, a criticism Russia has repeatedly levelled at the West.

Russia was found to have used a state-backed doping programme at the 2014 Winter Games in Sochi and was banned from international competitions afterwards. 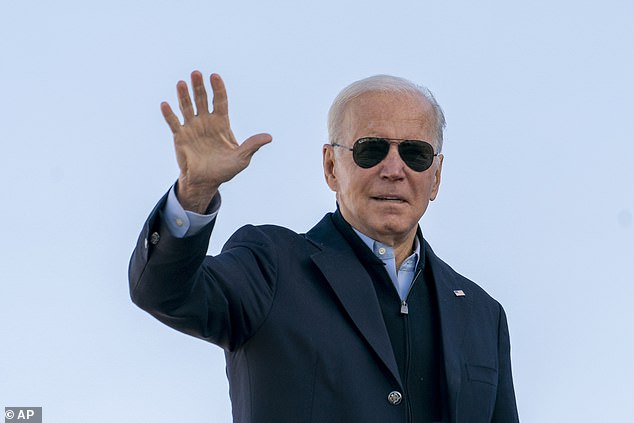 Russian athletes are allowed to compete as neutrals – without the Russian flag or anthem – if they can prove their doping record is clean.

Russian officials including Putin are banned from attending international competitions unless invited by the head of state of the host country. Xi has invited Putin to attend.

Both China and Russia have seen their relationship with Western nations deteriorate in recent years and have sought to project a more unified front.

On Wednesday, Putin told Xi that ‘a new model of cooperation has been formed between our countries’ that includes a ‘determination to turn our common border into a belt of eternal peace and good-neighbourliness’.

‘I consider these relations to be a real model for inter-state cooperation in the 21st century,’ the Russian leader said. 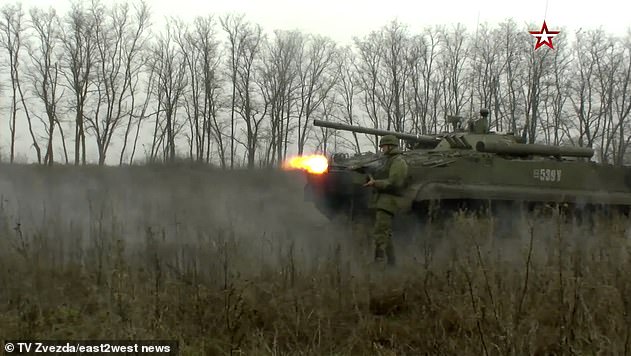 Russia has staged huge live-firing drills with more than 1,000 tank troops in a region close to the Ukraine border as Russian President Vladimir Putin continues to stoke fears that Moscow will invade Kiev

After the call, the Kremlin’s top foreign policy adviser Yury Ushakov said that the conversation between the ‘two great friendly states’ had lasted 90 minutes and was ‘very positive’.

The US and its allies have for weeks accused Russia of planning an invasion of its ex-Soviet neighbour Ukraine, warning of massive coordinated sanctions should Putin launch an attack.

Tens of thousands of Russian troops are stationed near Ukraine, where the West has accused the Kremlin of backing pro-Moscow separatists since 2014.

Russia rejects the allegations and blames the West for stoking tensions.

In calls on Tuesday with the leaders of France and Finland, Putin said he wanted security talks with the United States and NATO to begin without delay.

Putin told Finnish President Sauli Niinisto that he wanted to ‘immediately launch negotiations’ in order to ‘develop international legal guarantees for the security of the country,’ the Kremlin said in a readout of the call. 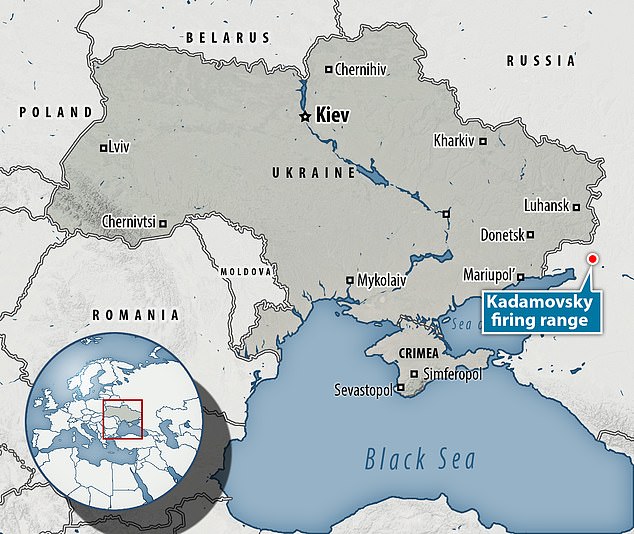 Russia staged ground battle exercises some 30 miles from the frontier, a move which will do nothing to calm fears over his intentions. Video footage and pictures show the drills held by the country’s southern military district at Kadamovsky firing range in Rostov region

The Kremlin said Russia’s demands included stopping NATO from expanding east and the deployment of weapons in neighbouring states, including Ukraine.

Moscow staged huge live-firing drills with more than 1,000 tank troops in a region close to the Ukraine border as Putin continues to stoke fears Russia will invade its neighbour within weeks.

Putin has denied Russia plans to seize territory from Ukraine and has accused Britain and its allies of ‘demonising’ his country. 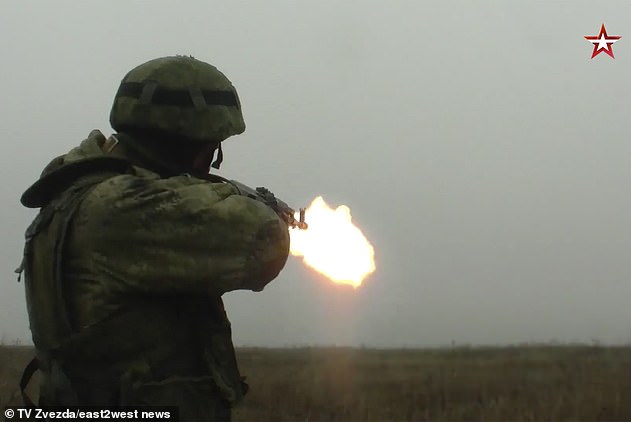 But the Kremlin strongman is now looking for China’s support in Europe and will discuss ‘cooperation priorities’ of the future.

It comes as new footage showed Russia staging ground battle exercises some 30 miles from the frontier, a move that will do nothing to calm fears over Putin’s intentions.

On Monday, British Prime Minister Boris Johnson warned Putin in a phone call of his ‘deep concern’ about the Russian military build-up close to Ukraine, and that ‘serious consequences’ will follow in the event of invasion.

US intelligence officials estimate that as many as 175,000 Russian troops could launch an attack early next year, with troops, tanks and artillery already massing on the Ukrainian border.