Russian President Vladimir Putin is dangling hefty boosts in cash payments to the families of deceased soldiers as those who might get career-ending injuries in his ‘special operation’ in Ukraine – in the latest sign of the bloody toll it is taking on his forces.

Putin spoke at length about the specific cash amounts and what they could be used for in his latest rambling speech – his first remarks attempting to justify the Ukraine invasion since he announced it more than a week ago.

He said there would be payments of up to 5 million rubles ($45,000 at current rates after the currency tumbled) to the families of fallen Russian soldiers – after the Russian government finally confirmed casualties and said more than 500 of their forces had died. Ukrainian estimates of Russian troops killed are far higher.

‘Unfortunately, we have losses, and our duty is to support the families of our military who are fighting for our people, people of Russia,’ Putin said in televised remarks Thursday on the eighth day of the invasion, where he characterized Ukrainians defending their homeland as ‘extreme gangsters.’

He made the comments about his country’s military survivor benefit program even as he called the operation in Ukraine a ‘success’ and said ‘all the tasks that have been set are being successfully resolved.’ 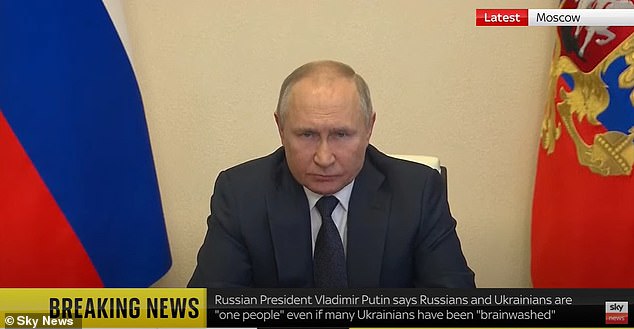 Russian President Vladimir Putin announced a boost in the cash payments to the families of deceased Russian soldiers taking part in the invasion of Ukraine. He also announced payments to those who could no longer serve due to injuries. It comes after Russia said more than 500 of its forces have been killed in the operation, which Putin called a ‘success’

The invasion has drawn a barrage of international sanctions and a resounding vote to condemn it at the United Nations.

‘But moreover, I believe that it’s necessary to set additional payments to the military and military and other forces that are participating in this operation in the amount of 5 million Rubles,’ he said in the latest of his rambling speeches, with commnets translated from Russian and aired by Sky News.

Then he outlined specific payments to the injured – amid a wealth of video footage of burning and destroyed Russian vehicles, even amid Russia’s sustained bombing of Ukrainian cities and towns.

‘All military who are participating in this operation will also receive additional payouts, insurance payouts, plus compensation for any injuries if a soldier is not able to continue his military service as a result of this operation, they will receive a payout of 2.9 million rubles and this has been put in law already,’ Putin said. 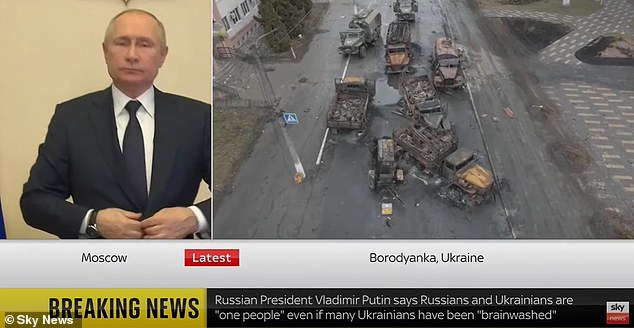 Putin stood up for a moment of silence during his televised remarks. Members of his security council were taking part by zoom, so he appeared to be alone. Sky News aired the speech alongside images of burned out Russian vehicles 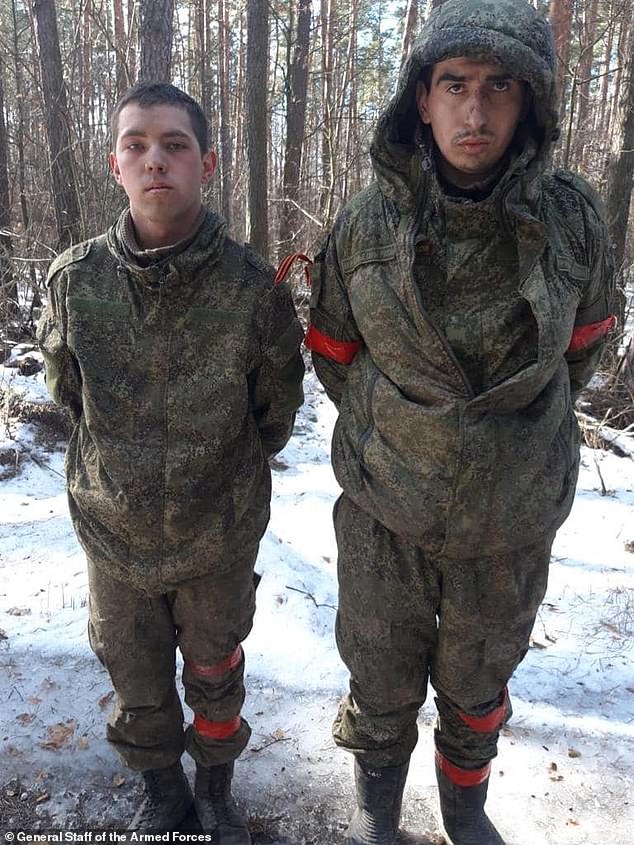 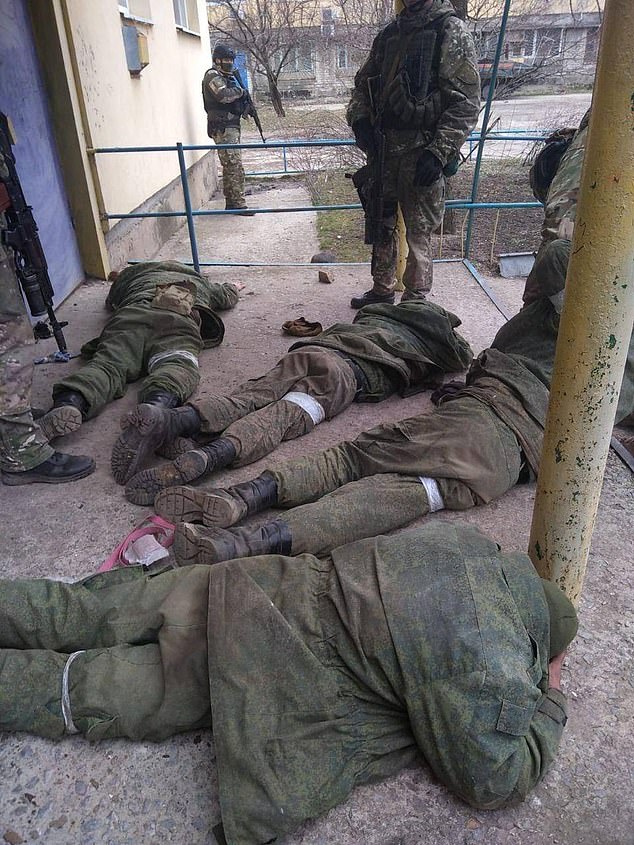 An image posted on the Internet appears to show Russians captured by Ukrainian soldiers.

‘I also believe we need to ensure additional payments to the staff of the minister of Defense and any injured personnel in the amount of 3 million rubles ($27,000). I would like to emphasize again that our officers and soldiers are fighting for Russia for a peaceful life of citizens of Donbass to demilitarize and de-Nazify Ukraine so that we do not have anybody who is threatening us at our borders, including threatening us with nuclear weapons.

It comes after Russia finally confirmed 500 wounded and 1,500 injured – with Ukraine saying Russian casualties were far higher, with Ukrainian defense officials putting the figure at 9,000.

Putin stood at the end of his zoom session with other officials and held a moment of silence for fallen forces.

‘We are proud with our military. We will remember our fallen comrades, we will do everything to support their families, their children to support their education. And I asked you to honor them with a minute of silence,’ he said.

It all comes amid a series of anecdotal signs that members of Putin’s invasion force were young, undertrained, or in some cases uninformed they would be participating in an invasion of their neighboring country, where many Russians have family.

A Pentagon official said Tuesday that some groups of Russians had surrendered or even sabotaged their vehicles – one possible contributor to the stalled convoy of Russian equipment north of Kiev.

Ukraine has been seeking to encourage them to give up the fight, offering young soldiers with calls home to their mothers and even offering one surrendering soldier tea.

Said Ukrainian President Volodymyr Zelensky in a video: ‘Our military, our border guards, our territorial defense, even ordinary farmers capture the Russian military every day.

‘All the captives say only one thing: they do not know why they are here. Despite the fact that there are dozens of times more than them, the morale of the enemy is constantly deteriorating.’

Pentagon spokesman Adm. John Kirby spoke to Russia’s challenges on CNN Thursday, even as Russia made territorial gains with its vicious assault.