A committal ceremony for Queen Elizabeth II will take place in Windsor on Monday, September 19, following her funeral at Westminster Abbey.

The ceremony for the late Queen, who died on Thursday, will take place at St George’s Chapel within the grounds of Windsor Castle.

King Charles III, accompanied by senior members of the Royal Family, is expected to join the procession in the Quadrangle of the castle before the coffin enters the chapel for the service.

Ahead of the committal service, it is expected that many people will travel to the town to pay their respects and mourn the late Queen. People are being advised to lay floral tributes at Cambridge Gate on the Long Walk. 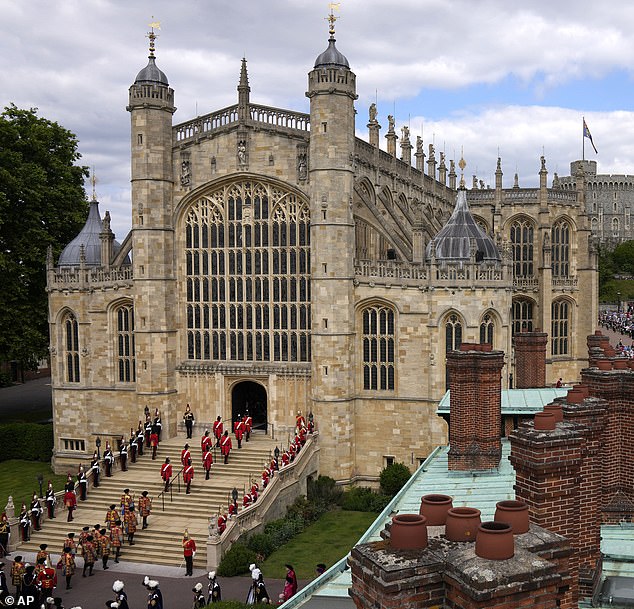 A committal ceremony for Queen Elizabeth II will take place at St George’s Chapel at Windsor Castle on Monday, September 19, following her funeral at Westminster Abbey

Thames Valley Police will offer further advice about travelling to Windsor and inform the public of any road closures that will be in place during the lead-up to the committal and on the day itself.

During the period of national mourning, police presence has been ramped up in the Berkshire town, with a number of security measures being put in place.

This includes a visible increase in the number of police horses being used, as well as armed officers and street searches involving dog units.

Police will also place more Automatic Number Plate Recognition (ANPR) cameras and CCTV in the area as well as having a number of undercover police protections will also be in place.

The Royal Family regularly use St George’s Chapel for weddings, christenings and funerals. 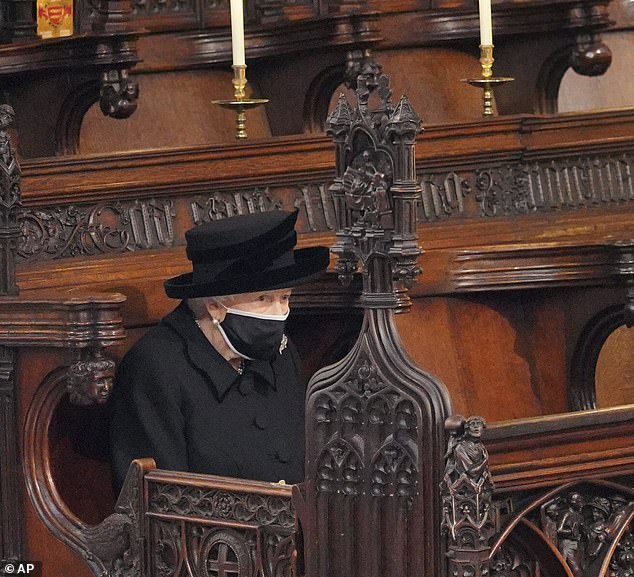 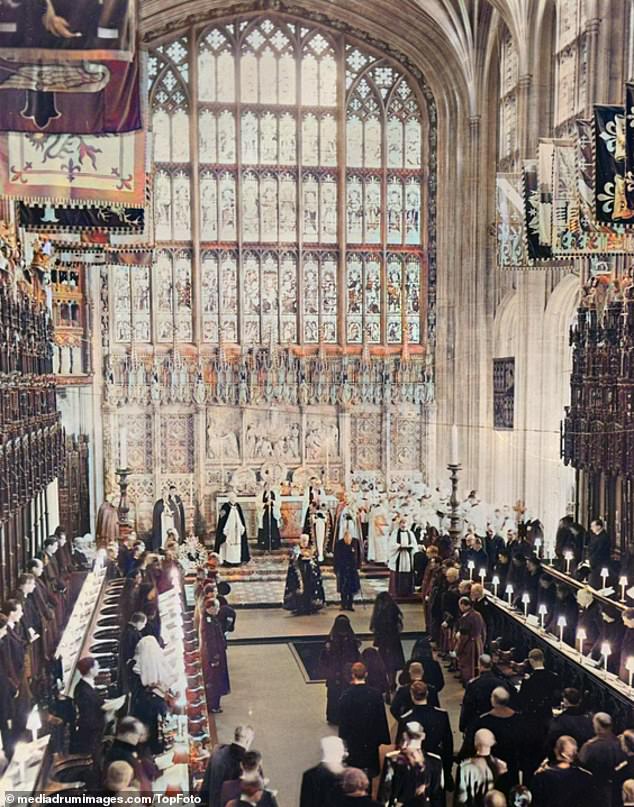 Just last year, Prince Philip’s funeral was held there in April, where the Queen poignantly sat alone in the Chapel after insisting she followed the rules that all Britons were bound to amid the Covid-19 pandemic.

On February 6 1952, the Queen’s father King George VI, was buried in the Royal Vault of St George’s Chapel after his own committal ceremony.

The late her Majesty’s final tribute to her father was to drop a handful of earth that she had collected from Frogmore at Windsor on his coffin.

Prince Harry and Meghan Markle got married there in 2019, and Prince Philip’s funeral was held there in April of last year.

Ahead of the committal ceremony, Thames Valley Police Assistant Chief Constable Tim De Meyer, strategic commander for the force’s response to Her late Majesty’s death, said: ‘During this very sad time we understand that a lot of people will want to come to Windsor to pay their respects to Her late Majesty, especially as we get closer to the day of her funeral and committal ceremony.

‘Thames Valley Police has a long history of policing substantial royal events, including in recent years the wedding of the Duke and Duchess of Sussex and the funeral of His late Royal Highness the Duke of Edinburgh.

‘Visitors to Windsor will see a larger police presence than normal in the town as we work to ensure that everyone can pay their respects safely and a variety of security measures are in place.

‘Our thoughts remain with the Royal Family.’ 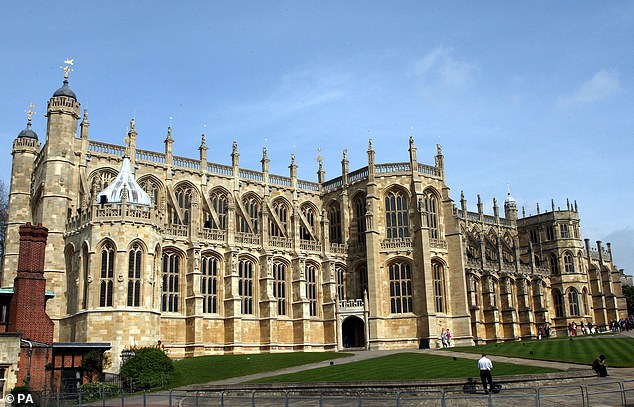 The Chief Constable advised anyone with concerns or queries to speak to officers in Windsor.

Tomorrow morning the Queen’s coffin, which is lying in the ballroom at Balmoral Castle, will be driven by a hearse to the Palace of Holyroodhouse in Edinburgh.

On Monday, the coffin will then be taken to St Gile’s Cathedral where it will lie until Tuesday. After lying in state for 24 hours, the coffin will be flown to RAF Northolt and taken by road to Buckingham Palace. 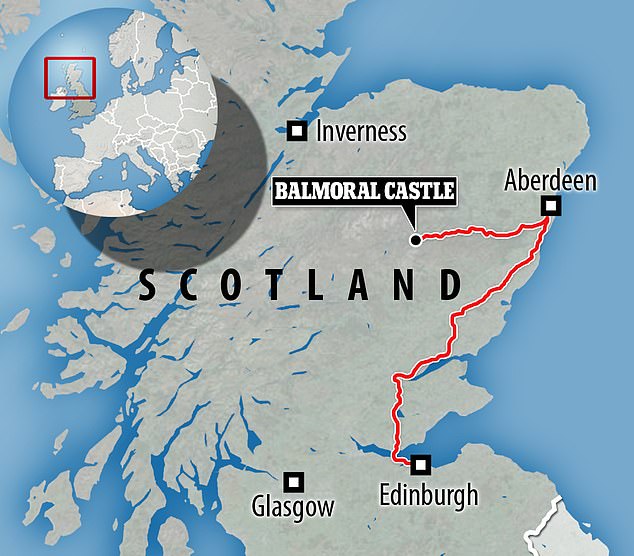 After leaving Balmoral at around 10am tomorrow, the Queen’s coffin will travel to Aberdeen before being taken to the Scottish capital 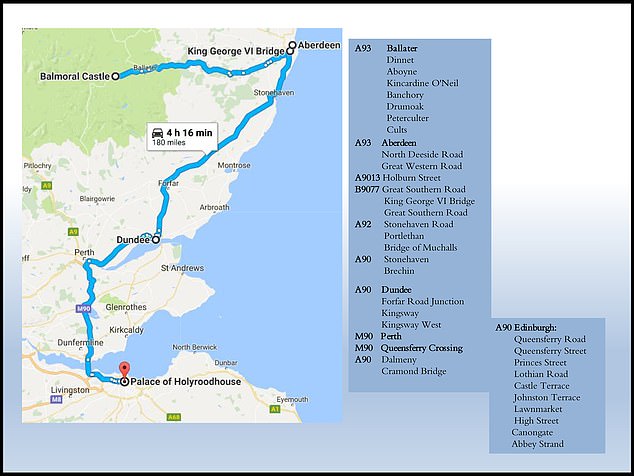 The Queen’s coffin – which is lying in the Ballroom at Balmoral Castle – will be taken by road to the Palace of Holyroodhouse in Edinburgh on Sunday September 11, on a six-hour journey by hearse

Scottish First Minister Nicola Sturgeon said the ‘poignant’ journey would give the public a chance to come together to ‘mark our country’s shared loss’.

Wellwishers are expected to gather along the route the cortege will take as it travels from Balmoral to the Scottish capital.

The cortege will first head to the nearby town of Ballater, where it is expected to arrive at approximately 10.12am.

It is then expected to arrive in Aberdeen about an hour later, with tributes expected to be paid in the city’s Duthie Park. 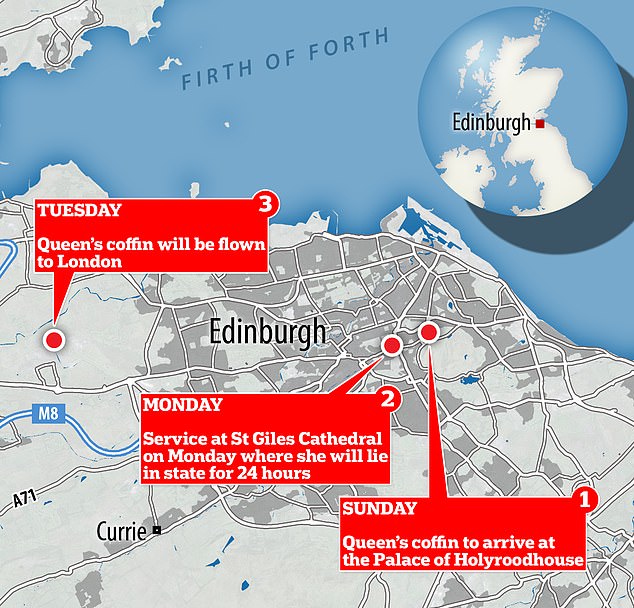 When her coffin arrives in Edinburgh it will be taken to the Palace of Holyroodhouse, the official residence of Her Majesty The Queen in Scotland, before a service is held at St Giles’ Cathedral on Tuesday

Travelling south along the A90, it will then arrive in Dundee at about 2pm.

In Edinburgh, Ms Sturgeon and other party leaders in Scotland are expected to observe the coffin as it goes past the Scottish Parliament.

From there it will be taken into the Palace of Holyroodhouse, where it will remain for the night.

Transport bosses said an ‘unprecedented’ amount of preparation and planning had gone into drawing up the route, which marks the start of the Queen’s last journey.

Ms Sturgeon stated: ‘Her Majesty’s death at Balmoral Castle means Scotland has lost one of its most dedicated and beloved servants.

‘The grief we have seen across the world has been profound and deeply touching. It will be especially poignant to see Her Majesty’s coffin begin its journey from her Aberdeenshire home to the Palace of Holyroodhouse in Edinburgh.

‘This is a chance for people to gather together publicly and begin to mark our country’s shared loss.’