Raise a glass to clearing plastic from polluted sea 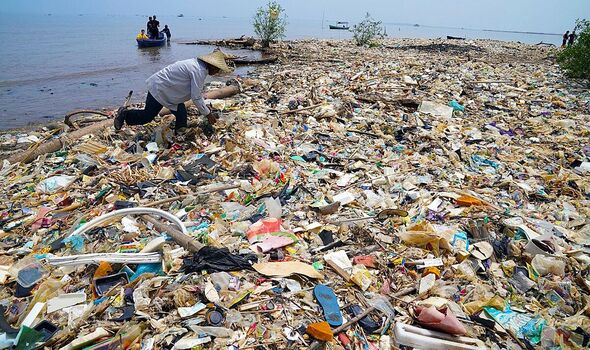 So they set aside part of their proceeds to remove trash from the rubbish-filled waters of Indonesia and have so far disposed of the equivalent of 10 million plastic bottles. Justin Moran and former footballer Richie Vandenberg, of wine brand The Hidden Sea, want to remove a billion discarded bottles from oceans by 2030.

Despite their ambition and enthusiasm, the men fell silent as they set eyes on the island made entirely of waste, near the capital Jakarta, during a recent visit.

They also took in the astonishing sight of plastic scraps and junk collecting against mangrove trees in a nearby river, which adds new waste to the sea constantly as it flows out.

Crunching in wellies through bottles, cups, shopping bags, straws, toys and food wrappers, Justin, 48, said: “It is an epic crisis.”

Australian Richie, 45,  jumped into the Java Sea – one of the world’s most polluted – only to find himself surrounded by a current of waste.

Richie said: “There’s every kind of plastic here that you can imagine – it feels like I have fish around me but it’s just plastic everywhere.”

The friends set up The Hidden Sea with a promise that every bottle sold – priced at about £8 or £9 in the UK – would fund the removal of 10 plastic bottles from the ocean.

The removal process is run by ReSea Project, which pays a team of 75 people – some former fishermen – to collect and sort the watery piles of trash.

“There is only one ocean so no matter where the plastic enters, it ends up in the ecosystem – it affects us all, it’s in our food chains.”

Richie added: “There have been times I’ve been completely overwhelmed but you’ve got to stay positive – we have to start somewhere.”