Rapist pretending to be police officer jailed for 14 years

Pawel Pazola, 51, from Crawley, west Sussex, has been jailed for 14 years after pretending to be a police officer with a fake gun and badge to rape two Brazilian prostitutes

A rapist who pretended to be a police officer with a fake gun and badge was today jailed for 14 years for sex attacks on prostitutes.

Pawel Pazola, 51, from Crawley, west Sussex, used the gun to subdue the two Brazilian victims while raping them.

His victims were two sex workers who were in London at the time of the attacks in 2020.

The sentencing at Wood Green Crown Court came after he was found guilty of all charges on September 2 following a trial that lasted two weeks.

During the trial, the court heard details about how Pazola first contacted his victims via an online escort service.

He raped the first victim on August 7 last year after meeting her at an address in Camden, where he forced her to engage in sexual acts beyond what they had agreed.

The second rape took place on August 22, 2020, in Bayswater, Westminster. Again, Pazola used force to get the victim to carry out sex acts that she had not agreed to.

On both occasions, Pazola pretended to be a police officer and threatened to deport the victims if they didn’t comply.

In the second attack, he even produced a fake police badge and fake gun.

After raping the victims, he took back the money he had initially paid them. He also stole additional money from his second victim. 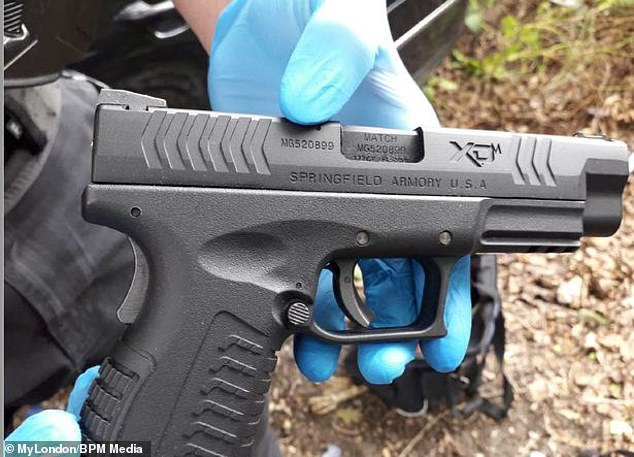 This fake gun was found in Pazola’s home during a police search. He used it to subdue his victims

The first victim had already reported Pazola to the police on August 10, just 12 days before he carried out his second attack.

The second victim reported her incident to the police on August 27, with the encouragement of the first victim, who she had met on a WhatsApp group for Brazilian sex workers in the UK.

Pazola was arrested three days after he was reported for the second time, on August 30, at an address in Crawley following an investigation by detectives from the Central North’s Serious Sexual Offences Team.

An imitation police badge, a black replica handgun and £1,380 in cash were seized at his property during a police search. 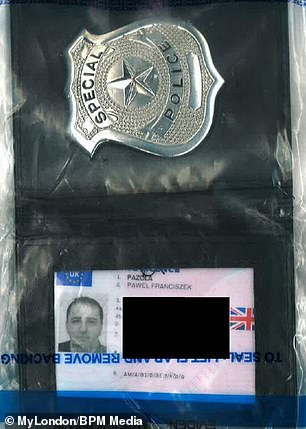 An imitation police badge, a black replica handgun and £1,380 in cash were seized at his property during a police search

The next day, Pazola was charged and sent to appear at the Highbury Corner Magistrates’ Court where he was remanded in custody ahead of trial.

His victims testified against him via video link throughout his trial, as they had both since returned to Brazil.

Detective Sergeant Sam Lockstone, who led the investigation, said: ‘Pazola is a highly dangerous predator who sought to take advantage of the victims’ perceived vulnerabilities for his own gratification and monetary gain.

‘I would like to praise the victims for showing such bravery and courage throughout this investigation and during the trial. I am especially pleased that our supportive response to the first victim encouraged the second victim to come forward.

‘The Met’s response to sex work has not changed; our priority remains addressing vulnerability and exploitation linked to on-street, off-street and online sex work.

‘Our approach is not to criminalise the sex workers involved but to safeguard and support them, and build mutual trust and confidence to encourage the sharing of information to improve safety.

‘I hope that this sentence demonstrates the Met’s commitment to tackling crimes against sex workers, and violence against women and girls in whatever form it may take.’

After his release from his 14-year sentence, Pazola will remain on licence for a further four years.

Pazola has also been made subject to sex offenders notification requirement for the rest of his life.

Be, Police, pretending, rapist, to
Celebrities