REBECCA ENGLISH watches the determination of the mourning royal ladies

Their eyes were red-rimmed, but body language spoke volumes: REBECCA ENGLISH watches the steely determination of the royal ladies in mourning

The look on the Countess of Wessex’s face – her eyes red-rimmed, biting her bottom lip to stop it trembling – said it all.

At the sound of a clipped ‘left turn’ from outside, Sophie glanced nervously through the open door as if she couldn’t quite believe this was the beginning of the end.

Yesterday each was consumed by her own thoughts. Our new Queen Consort, 75, wearing a favourite glittering diamond stick insect brooch, was clearly struggling to hold back her tears, staring stonily ahead with her arms ramrod straight at her sides as she fought to keep her composure. 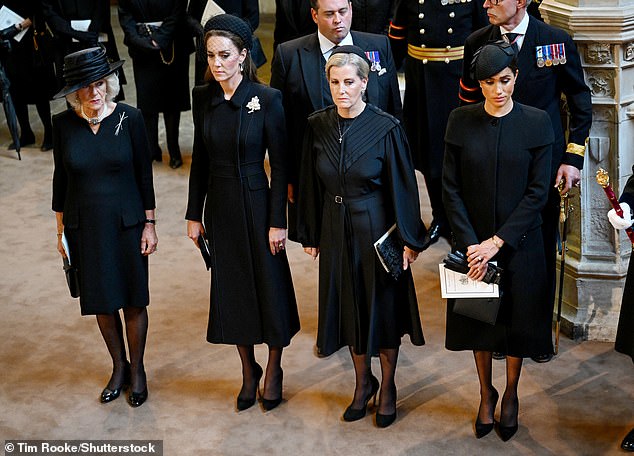 Women in black: The Queen Consort, Kate, Sophie and Meghan side by side in Westminster Hall yesterday. The sight of the four royal mourners evoked memories of George VI’s 1952 funeral 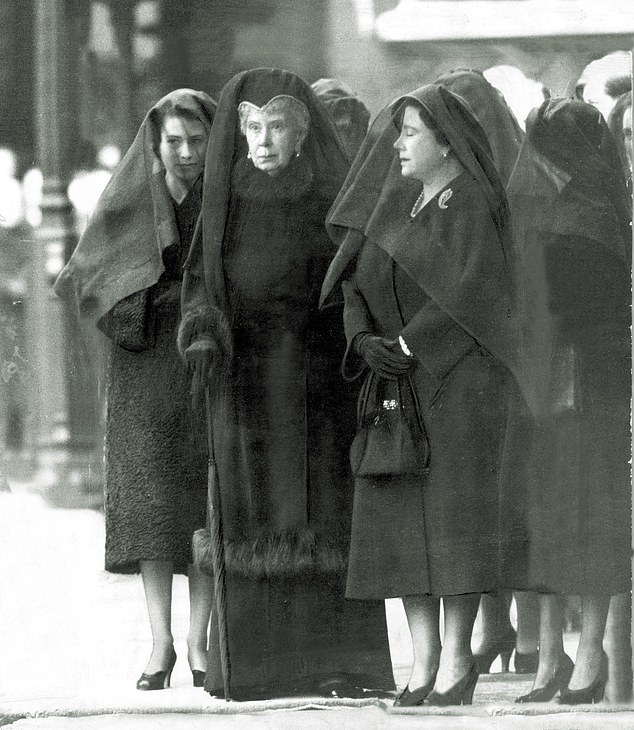 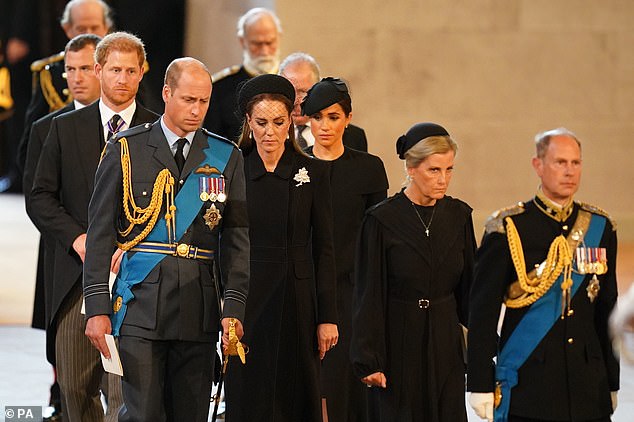 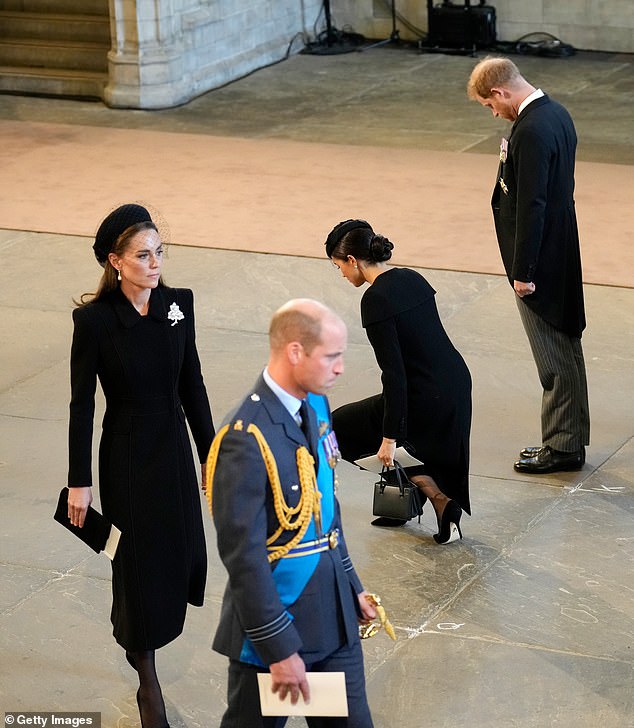 Show of respect: As William and Kate depart, Harry bows his head and Meghan curtseys before the Queen’s coffin

Next to her was the Princess of Wales, touchingly sporting the Diamond and Pearl Leaf brooch that had belonged to the Queen, the strain of the past few days etched on her face. Occasionally she leant over and spoke to Sophie, 57, as they waited, but otherwise Kate gazed studiously into the distance, hands clasped, as if to prepare herself for the ordeal ahead.

Fascinatingly, while the three working royals bunched together, there had been a notable gap between Sophie and Meghan.

And the body language of the women spoke volumes to all those present, including myself – one of only ten journalists permitted to view the moment the Royal Family handed their beloved matriarch over to the nation for her people to say their goodbyes. In fact the Duchess of Sussex, 41, looked decidedly self-conscious from my vantage point, just above her in the 900-year-old building, the oldest on the Parliamentary Estate.

Shoulders back, clutching her programme and bag, she was the most stylish and striking of them all. She wore a pearl of pearl earrings given to her by the Queen as a wedding present. But there was something self-consciously awkward about her posture, demonstrating the depth of the rift between herself and the rest of the Royal Family even if you happened upon them without any prior knowledge of the acrimony of the past four years.

Indeed Meghan, 41, who was holding black leather gloves, seemed so lost for something to do that at one point she rested her left hand in her pocket.

Fortunately Sophie, who has something of a reputation as a royal peacemaker and is known to have reached out a hand of friendship to Meghan previously, leaned over after a few minutes to exchange a few words.

It gave Meghan, who had travelled in a car with the countess from Buckingham Palace earlier – while the Queen Consort and Kate, as the two most senior women now in the Royal Family, went ahead together – a reason to move slightly closer to her husband’s aunt.

Next to her was a bow-legged Duke of Kent, the Queen’s cousin, who at 86 appears so frail it was a marvel he could stand, but whose fortitude in not only doing that, but in full military uniform, tore at your heart. Next to him was his brother, Prince Michael of Kent, 80, another ex-Sandhurst gradate.

Yesterday’s 20-minute service was so small and so intimate that it felt at times as if you were intruding into a private moment of grief. The television cameras were hidden away behind sympathetically decorated glass booths.

Earlier a group of MPs and peers, as well as High Commissioners of the Realms, took their places to the rear, mere specks in the cavernous, vaulted building. Then seven of the Queen’s ladies-in-waiting took up their positions close to the entrance. Some of them are in their 80s and have been by her side for more than 60 years.

Shortly afterwards a long line of the Queen’s closest relatives filed in – the Gloucesters, the Kents, the Ogilvys, the Chattos and Snowdons. Each and every one of them – more than 30 in all – loved, and were loved by, our Queen. 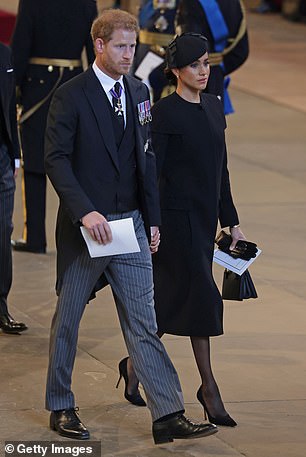 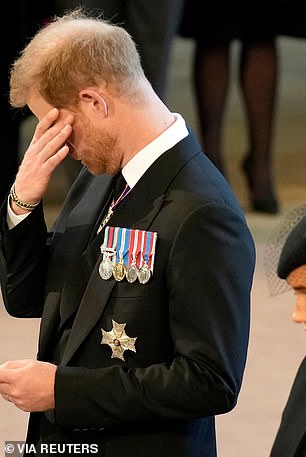 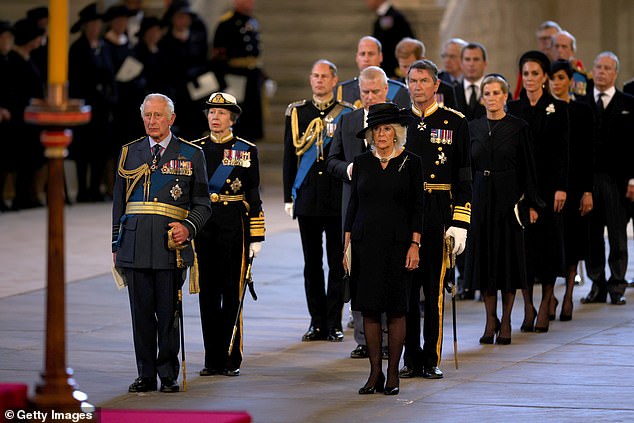 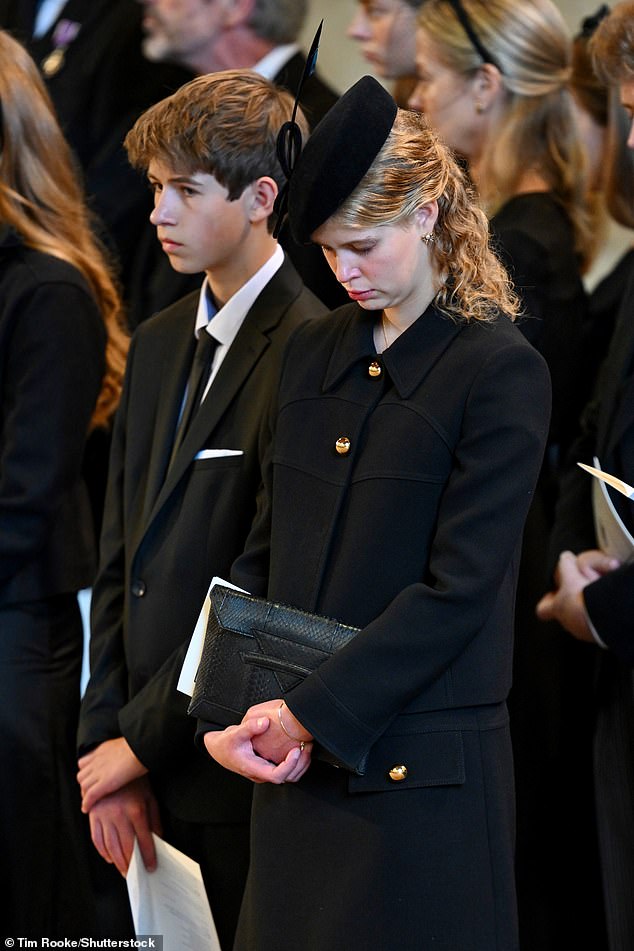 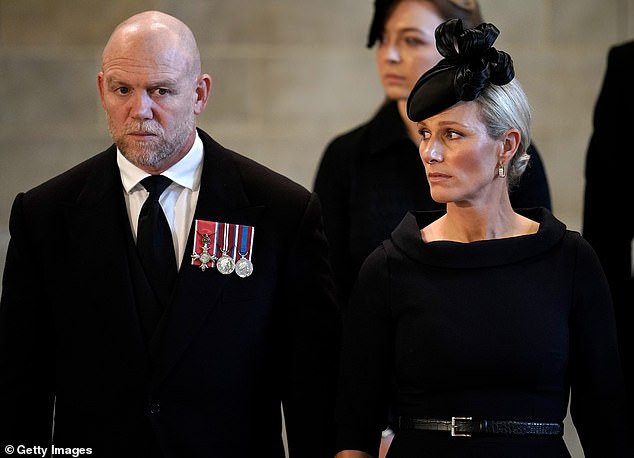 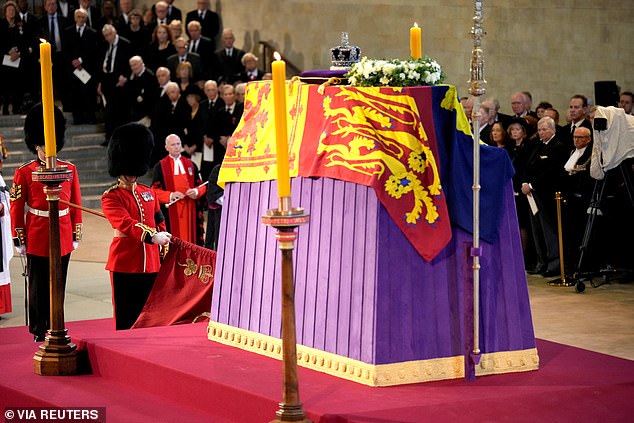 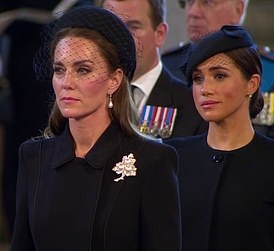 The Princess of Wales paid tribute to the Queen at yesterday’s service by wearing her diamond and pearl leaf brooch (above).

The Queen wore the jewellery, featuring three large pearls in the centre of a pave-decorated leaf, in 1999 on a tour of South Korea (below).

Kate has worn it before, in 2017 for a World War One commemoration in Ypres, Belgium. 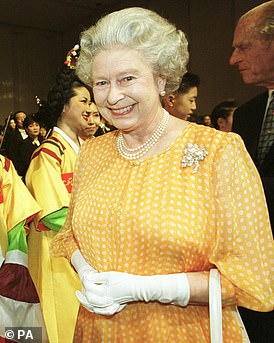 The last to arrive as part of the group were those of the Queen’s grandchildren who were not taking part in the procession or arriving by official car: Princess Eugenie and Princess Beatrice, accompanied by their husbands; Zara Tindall and her husband Mike; and the Queen’s youngest grandchildren, Prince Edward’s children Lady Louise, 18, and James, Viscount Severn, 14.

The choir of His Majesty’s Chapel Royal, St James’s Palace, heralded the arrival of the Queen’s coffin in Westminster Hall.

To the soaring notes of Psalm 139, her coffin adorned with the Royal Standard and the Imperial State Crown with a wreath of white roses, dahlias and pine from gardens at Balmoral as well as pittosporum, lavender and rosemary from the gardens at Windsor she loved to walk in, was borne in at just after 3pm.

I had been warned by royal staff that the coffin was ‘tiny’, but it still took your breath away to see it in person given the size of the Queen’s reach and global stature.

It made its way into the centre of the hall, placed on a catafalque which had been dressed in royal purple and gold, with a towering candle at each corner.

The Queen Consort, Kate, Sophie and Meghan all curtseyed as the coffin was carried past – Camilla unable to take her eyes off it, with the Countess of Wessex appearing utterly bereft – before joining their husbands at the door for a procession up the centre of the hall.

Once in position the family stood and looked towards the coffin for the duration of the service, which was led by the Archbishop of Canterbury, supported by the Dean of Westminster, and perfectly brought together two of the things most important to the Queen – her Christian faith and her family.

When the service ended, female members of the family curtseyed at the coffin, while the men bowed their heads – Meghan sweeping low on the floor. Among the first group of senior royals to exit, she and Harry were alone in holding hands.

But they were later followed by Zara and Mike Tindall and others who also showed gestures of affection. And I saw the King briefly raise his eyes heavenwards and give a deep sigh, as if to steel himself for the difficult days ahead.

The family was followed by a small group of loyal servants and courtiers. Intriguingly, there was no sign of her right-hand woman, her dresser Angela Kelly, who was with her at Balmoral to the end.

In a speech to mark her Diamond Jubilee in 2012 in Westminster Hall, the Queen said of the setting: ‘We are reminded here of our past, of the continuity of our national story and the virtues of resilience, ingenuity and tolerance which created it. I have been privileged to witness some of that history and, with the support of my family, rededicate myself to the service of our great country and its people now and in the years to come.’

How fitting, then, that Westminster Hall is now the central focus of the nation’s dedication to arguably its greatest head of state.