Reckless walkers and fossil hunters risk their lives at the foot of 150ft cliff just days after 1,000 tons of rock fell in huge landslip

Reckless walkers were spotted dangerously close to a cliff that saw 1,000 tonnes of rock fall from its edge just days before.

Against all warnings and safety alerts, a man was captured peering over a fragile 150ft cliff in the aftermath of a huge landslip.

On Wednesday, more than 1,000 tonnes of rocks and boulders the size of cars fell onto the beach at West Bay, Dorset – the setting for TV drama Broadchurch.

Now a 60ft-high pile of sandstone rocks is spread across the beach, which a small group of fossil hunters were also photographed clambering over today.

People were spotted dangerously close to the fragile cliffs at West Bay, Dorset

It was stressed that another rockfall could happen at any time after Wednesday’s event was sparked by a spout of heavy rain.

The South West Coast Path at the cliff’s top has been temporarily closed while council engineers assess the area.

The fall comes just 11 years after tourist Charlotte Blackman was crushed to death in a huge landslip while walking under the cliffs further along the Jurassic Coast at Burton Bradstock. 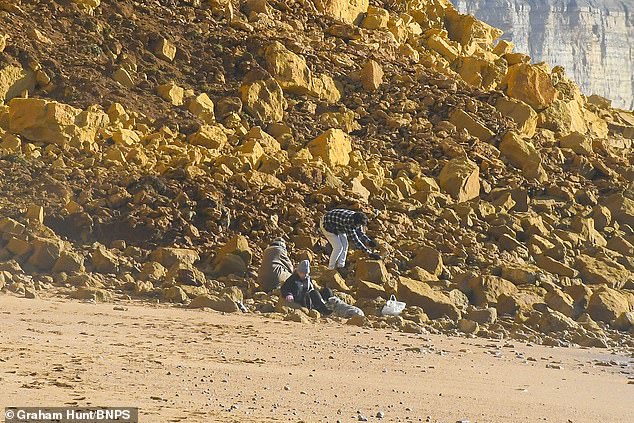 On Wednesday, boulders the size of cars fell onto the beach in a huge landslip

He said: ‘We urge people to stay away from the cliff edge.

‘Rock falls like this show exactly how dangerous it can be.

‘Walking on the edge of that cliff at the moment is taking your life into your own hands.’ 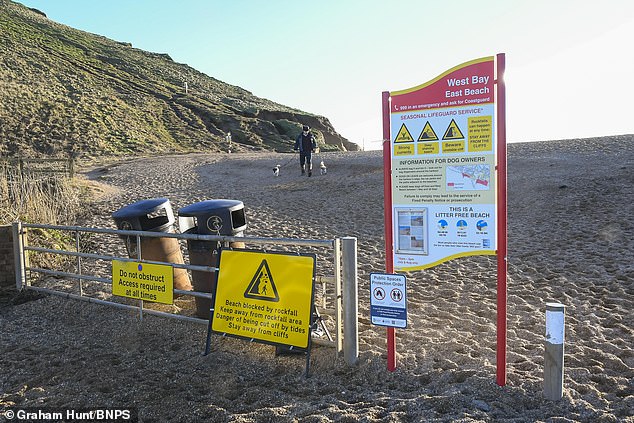 Just eleven years ago, a tourist was crushed by a rockfall further along the coast

This week’s landslip ripped a 150ft wide chunk from the land at the top of the Broadchurch featured cliff.

Mr Scriven continued: ‘The entire Jurassic Coast is very mobile at the moment. We have had recent collapses at Charmouth and Lulworth Cove in recent weeks.

‘We put up extra warning signs after events like this so that nobody can accidentally wander into danger.

‘We can never say for sure when one of these cliff collapses has finished.’

Coastguards and Dorset Council have also urged members of the public to stay away from the area as it is likely more slips will happen.