Christian Porter has discontinued his high-stakes defamation claim against the ABC, in a move that has renewed calls in Canberra for a public inquiry into allegations he raped a woman in the late 1980s when they were both teenagers.

In a statement on Monday, the ABC said Mr Porter “has decided to discontinue his defamation action against the ABC and [journalist] Louise Milligan” over an online story published on February 26 this year. 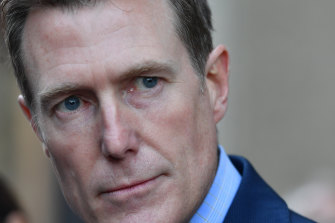 Claiming he is the winner: Christian Porter outside the Federal Court in Sydney on Monday.Credit:AAP

The broadcaster said “all parties have agreed to not pursue the matter any further” and “no damages will be paid”. It later clarified that “the only costs that the ABC will be paying are the mediation costs”.

“The ABC stands by the importance of the article, which reported on matters of significant public interest, and the article remains online,” it said.

Mr Porter said outside the Federal Court in Sydney that the outcome was “a humiliating backdown by the ABC”. The article was “sensationalist”, “one-sided” and written in such a way that people would “assume guilt”.

Labor’s shadow attorney-general, Mark Dreyfus, said Mr Porter’s decision to drop the action meant Prime Minister Scott Morrison “no longer has an excuse to refuse to hold an independent inquiry into these allegations”.

“As Labor said from day one, Mr Porter’s defamation action was never a substitute for a proper independent examination of Mr Porter’s fitness to serve as a minister,” Mr Dreyfus said.

Federal Court Justice Tom Thawley had granted an order on Thursday restraining Mr Porter’s former barrister, high-profile defamation silk Sue Chrysanthou, SC, from acting for the federal Liberal minister in the defamation case on the basis she previously advised a potential witness for the ABC.

The parties attended mediation behind closed doors on Friday.

In an editor’s note added to the story on Monday, the ABC said the article was “about a letter to the Prime Minister containing allegations against a senior cabinet minister” and was about Mr Porter, although he was not named.

The note says the ABC “did not intend to suggest that Mr Porter had committed the criminal offences alleged” and “did not contend that the serious accusations could be substantiated to the applicable legal standard – criminal or civil”.

It added “both parties accept that some readers misinterpreted the article as an accusation of guilt against Mr Porter. That reading, which was not intended by the ABC, is regretted.”

The ABC said in its statement that it stood by its investigative and public interest journalism and stood by Milligan, “one of Australia’s foremost and most awarded investigative journalists”.

In a second statement, released late on Monday, it said: “The article was not ‘sensationalist.’ It was an accurate and factual report on a letter that had been sent to the Prime Minister and two other senior politicians.”

Mr Porter said on Monday that he would run at the next election, was committed to his West Australian seat of Pearce and was not seeking to return as attorney-general after moving to the portfolio of Industry, Science and Technology.

He said “you can never turn the clock back on this sort of reporting, and that’s why it’s so wrong”.

Professor David Rolph, a defamation expert at the University of Sydney, said the case was “high stakes on both sides” and there was a “sharp division” between the parties about what the article at the centre of the case meant.

Ultimately it would have been for the Federal Court to decide which, if any, defamatory meanings alleged by Mr Porter were in fact conveyed by the ABC’s article. This was a threshold issue in the case.

“What the words mean is not what the publisher subjectively intended the words to mean. It’s not even what some people might think the words mean,” Professor Rolph said.

He said a court had to determine what the ordinary reasonable reader, a legal construct, thought “the words mean, and that will be the single meaning of the words”.

Professor Rolph said there was a “mismatch” between what Mr Porter and the ABC claimed the ordinary reasonable reader would think the article meant.

“Until you resolve that issue, you can’t determine what defences might appropriately apply,” he said.

Mr Porter had claimed the article defamed him in a number of ways, including by suggesting he “brutally raped a 16-year-old girl in 1988” when he was 17, and that this contributed to her taking her own life last year, after she told NSW Police that she did not wish to pursue her complaint. He strenuously denies the claims.

In a written defence filed in court, 27 pages of which were redacted before an anticipated legal fight between the parties, the ABC said it did not say Mr Porter was guilty of rape and did not convey any of the other meanings alleged by him.

However, it said it could prove there were “reasonable grounds” for suspecting him of the crime, if the court found it had conveyed this meaning. The ABC was also seeking to rely on the public interest-style defence of qualified privilege, among other defences.

The Federal Court had set aside Tuesday and Wednesday this week to hear an application by Mr Porter to strike out significant portions of the ABC’s defence to his defamation claim, which may have knocked out some of its defences.

The ABC and Mr Porter attended mediation on Friday to settle the dispute out of court. Mediation is common in Federal Court defamation cases.

In an order made with the agreement of the parties on Thursday, Justice Jagot said secrecy orders covering parts of the ABC’s defence did not prevent “any mediator appointed by the parties” from being shown a complete version of the defence and Mr Porter’s reply.

Milligan said in a tweet on Monday that “we are still absolutely committed to the 27 redacted pages being in the public domain”.

Mr Porter’s solicitor, Rebekah Giles, said in a statement that the ABC and Milligan had “expressly agreed to … the permanent removal of the defence from the Court file”.