BUDAPEST (Reuters) – Divers brought up a body on Monday from the wreck of a tourist boat which sank last week in Budapest, and another body was pulled from the river 100 km downstream, identified by police as the eighth victim of the disaster. Twenty-eight people are presumed to have died when The Mermaid, a pleasure boat carrying 33 South Korean tourists and two Hungarian crew, capsized and sank after being hit by a cruise liner in the center of Budapest on Wednesday.

South Korean and Hungarian divers worked as a team on Monday in an attempt to recover bodies from the wreck, the first day they have been able to approach it after currents and storm waters kept them away.

Seven bodies were recovered on the night of the accident and seven Koreans were rescued alive. The authorities have said the other 21 people on board are all presumed to have been killed in the worst disaster on the Danube for more than half a century.

Hungarian divers found a body in the morning during an exploratory dive at the wreck, and later in the day South Korean divers pulled it from the river, the Hungarian counter-terrorism unit TEK, which is in charge of the rescue, said in a statement. It released no further details.

Police said another body found earlier on Monday near a village 115 km downriver from the capital had been identified as the eighth victim of the disaster. Authorities were still working to identify the body pulled from the river in Budapest.

The Mermaid capsized after being struck from behind by a large cruise liner near a bridge in the center of Budapest in driving rain.

After days in which Hungarian divers were unable to reach the wreck, South Korea sent its own recovery team which joined the operation on Monday.

“We are cooperating with Korean colleagues; this is a joint operation now,” Janos Hajdu, the chief of Hungary’s TEK, told a news conference.

The South Korean rescue team aims to recover bodies while the shipwreck is still on the river bed. The Hungarians say that is a possibility but they have also considered lifting the hull out of the water first.

TEK’s Hajdu said conditions had improved enough to launch several exploratory missions a day to the wreck but that entering it was potentially very dangerous.

“If we find bodies we will do everything to respect funerary aspects,” Hajdu said. Lifting the ship would be possible only once the waters subside enough for Hungary’s largest crane to fit under Budapest’s bridges and approach the site, he added.

The Ukrainian captain of the Viking Sigyn cruise liner which collided with The Mermaid has been detained and faces a criminal investigation. He denies wrongdoing.

Video footage from surveillance cameras show the bigger ship bearing down on the smaller vessel as they both pass under the bridge.

A captain of another boat on duty nearby at the time of the accident told private news channel TV2 on Sunday that the captain of the cruise liner never radioed the smaller vessel. 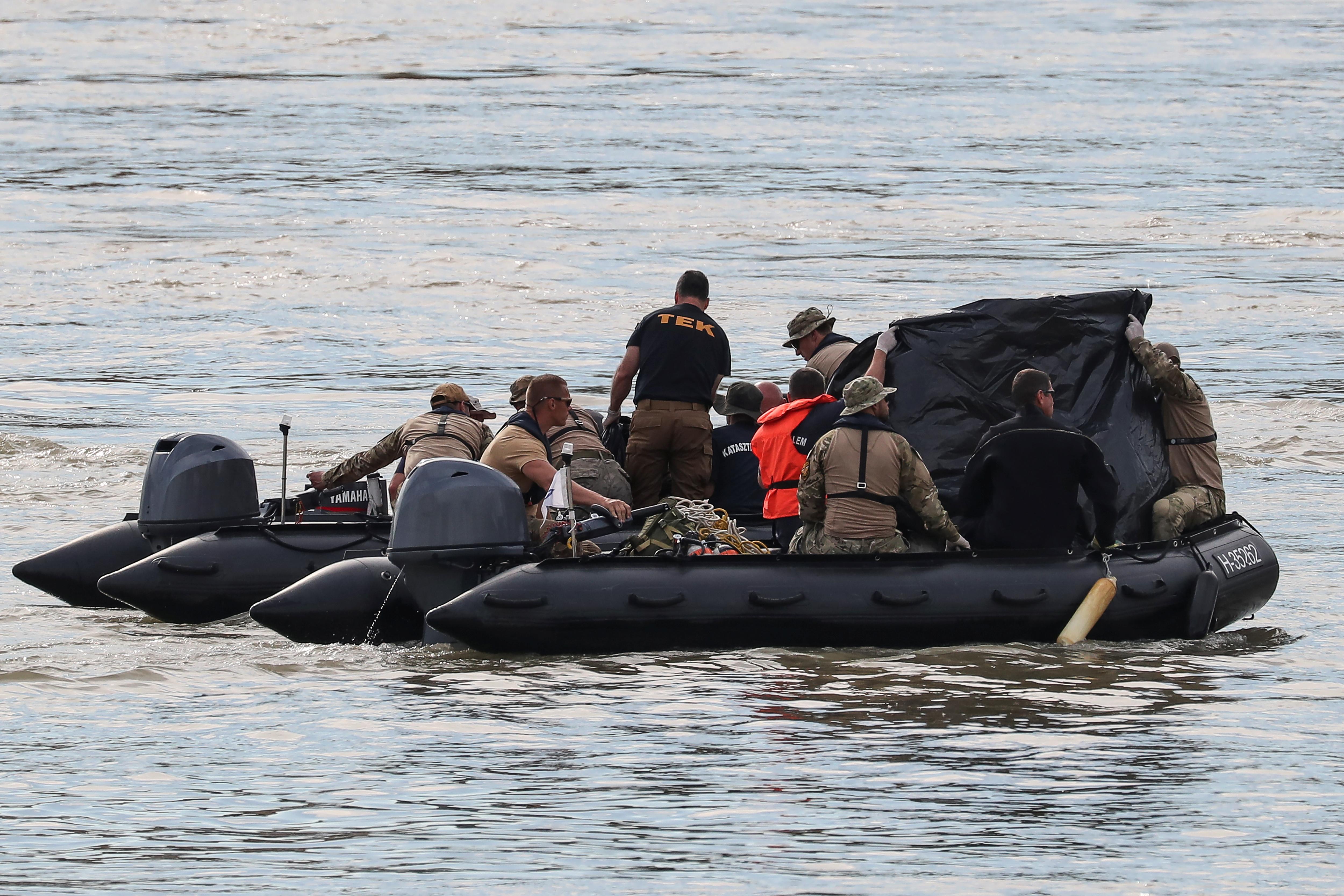 “We heard nothing of any kind of an attempted overtaking maneuver, warning, or danger signal on the radio,” Zoltan Tolnay said.

After the crash, the Ukrainian captain spoke on the radio in an unintelligible mix of Russian, English and German words, Tolnay said.

“I only learned from a later Hungarian shipping statement that there had been a disaster,” he added.