Revellers set to pack out clubs for post-Freedom Day parties

Party… while still you can! ‘100,000’ revellers packed clubs in first week of ‘Freedom’ as venues prepare for SOLD OUT events this weekend – amid fears Covid passports and ‘pingdemic’ could shut doors again

Approximately 100,000 punters are expected to let their hair down as clubs across the country will hold hundreds of club nights and events in the first full week of freedom.

Tens of thousands of young people in London, Birmingham, Leeds, Manchester and Liverpool are set to dance the night away in clubs and bars for the first time in 16 months.

On popular online ticket selling platforms such as Fatsoma and Eventbrite, there are over 200 clubbing events lined up in big party cities across the UK, including London, Birmingham, Manchester and Leeds.

Partygoers can expect a big night out every day this week, with venues desperately organising over 200 events in major party cities in the UK – as they hope to pile in as many punters as possible to make up for lost revenue over the last 16 months.

Venues are gearing up to host thousands inside packed – and largely sold out – clubs, pubs and bars across the nation throughout the week after most legal restrictions on contact were eased on ‘Freedom Day’.

But, fears persist over the lingering threat of Covid passports and potential impact of the so-called ‘pingdemic’ – with more than 1.7m people understood to be self-isolating at present. 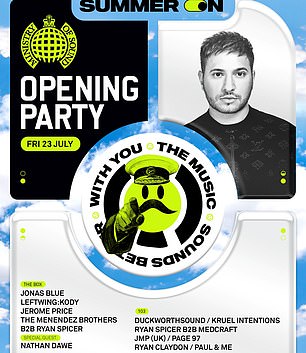 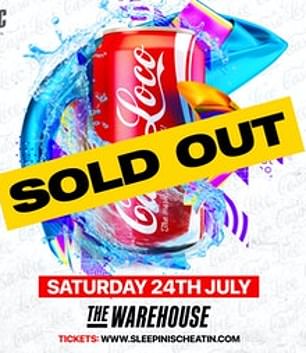 Partygoers can expect a big night out every day this week, with many weekend club events already advertising that they are sold out (pictured right: The Warehouse, Leeds) 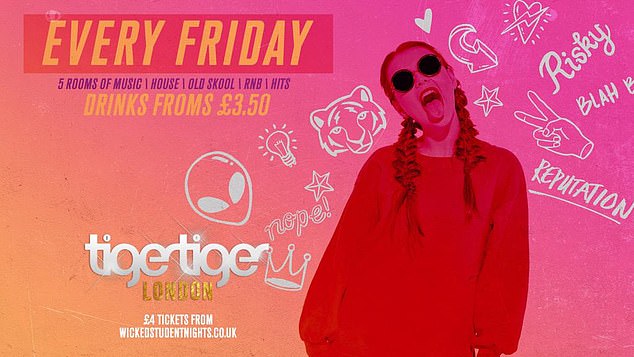 Venues are gearing up to host thousands inside packed – and largely sold out – clubs, pubs and bars across the nation 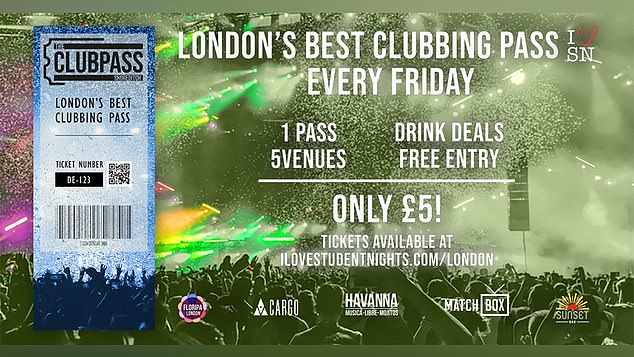 There are more than 200 adverts for clubbing nights out in Manchester, Leeds, Newcastle, Liverpool and London (above) on popular ticket selling websites

Several club nights advertised the return of pre-pandemic freedoms, with some setting lofty targets of attracting more than 1,000 patrons back through their doors.

Using numbers shared on popular online ticket sales websites, there could be close to 70,000 revellers enjoying club nights in major party hubs across the UK if the venues operate at full capacity and can attract punters in droves.

Long queues could be seen stretching for hundreds of metres at venues across the country as the clock ticked down to midnight on Sunday, July 18.

In a jubilant night described by some as ‘feeling like New Year’, tens of thousands of party-goers across England piled onto dance floors for the first time since March 2020.

Crucially, they were allowed to party without being required to provide Covid passports or negative Covid test results.

Face masks are also no longer legally required, and with social distancing rules shelved, there are no limits on people attending.

Venues including Fabric, E1, Ministry of Sound and Egg nightclubs in London, Pryzm in Brighton, Powerhouse Night Club in Newcastle and Moon Acre in Dorset re-opened on the stroke of midnight – the very second that most legal restrictions on social contact were removed.

The Astoria nightclub in Portsmouth, Hampshire, attracted 2,500 people for the first full night of dancing and fun after their brief 3-hours of opening just after midnight. 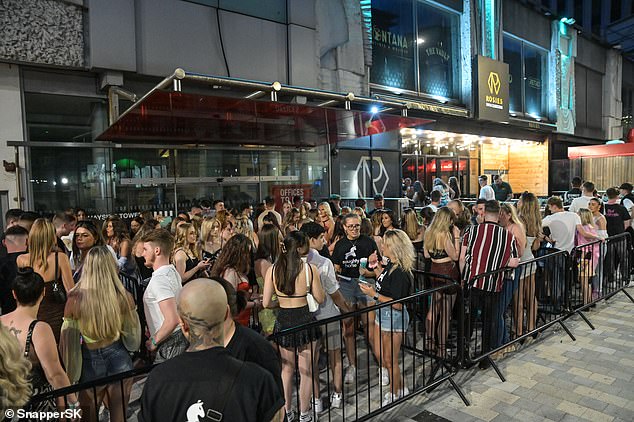 Tens of thousands of young people across the UK are set to dance the night away in clubs and bars for the first time in 16 months. Pictured: Revellers outside Broad Street, Birmingham 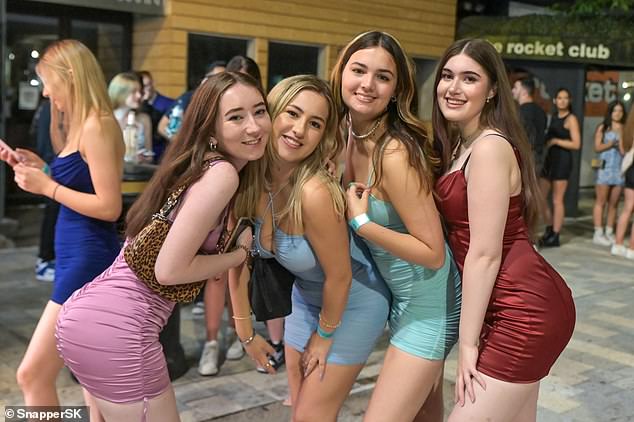 Four 19-year-old girls from Solihull queue up to get into Rosies nightclub, Birmingham 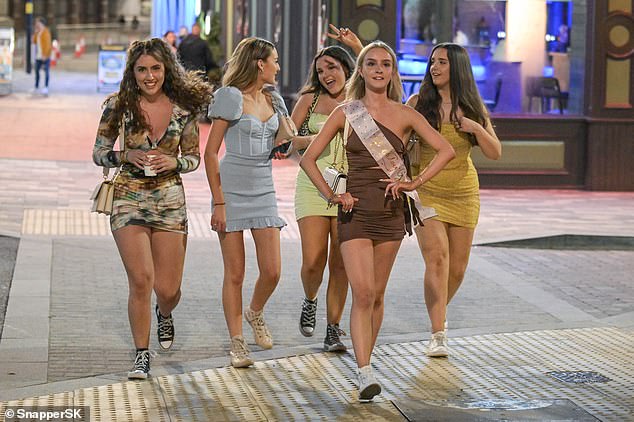 Face masks are also no longer legally required, and with social distancing rules shelved, there are no limits on people attending

But the partying hasn’t stopped since Freedom Day, with thousands of revellers set to enjoy boozy nights out throughout the week.

Event organisers have gone into overdrive this week as they organise, market, host and prepare for massive parties to make up for the lost revenue the hospitality industry endured over the past 16 months.

Freedom Circus at Zoo Bar in Leicester Square was dubbed the ‘biggest post-lockdown student celebration’, with six events over the next fortnight promising to attract 5,000 students.

At a sold out Tiger Tiger in Haymarket, approximately 1,500 students will enjoy DJ sets, confetti shows and a midnight countdown on Friday, July 23.

While at The Warehouse in Leeds, a capacity crowd of 1,000 is expected to boogie at the first ‘Casa Loco’ event since last March.

But, furious hospitality chiefs have hit out at Prime Minister Boris Johnson’s plans to make vaccine passports compulsory in nightclubs and other ‘crowded’ venues from September.

Speaking just hours after the venues were allowed to reopen for the first time in 16 months on ‘Freedom Day’, Mr Johnson declined to rule out extending the scheme to other hospitality venues, including pubs.

Night-time economy bosses have reacted angrily to the plans, calling the move ‘yet another chaotic U-turn’ and a ‘bad idea’, with eight in 10 nightclubs warning they do not want to implement vaccine passports amid concerns the requirement will damage their trade even further. 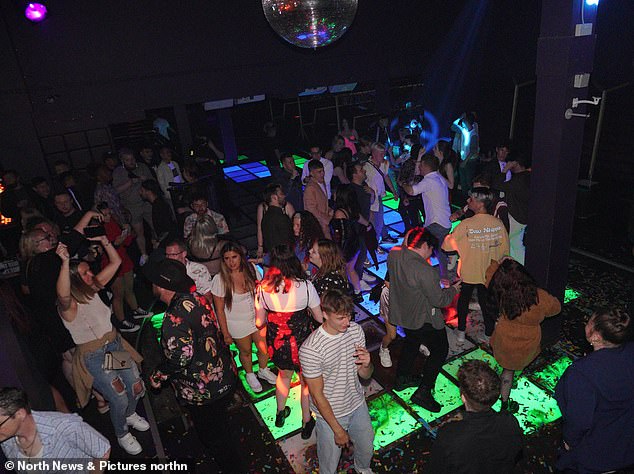 In a jubilant night described by some as ‘feeling like New Year’, eager party-goers across England piled onto dance floors for the first time since March last year on ‘Freedom Day’ 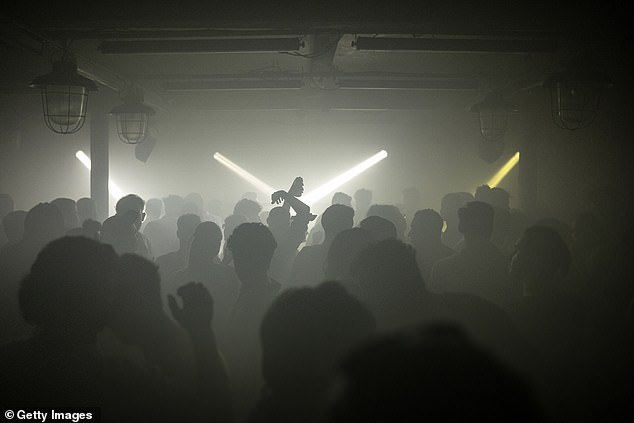 People dancing at Egg London nightclub in the early hours of July 19, 2021 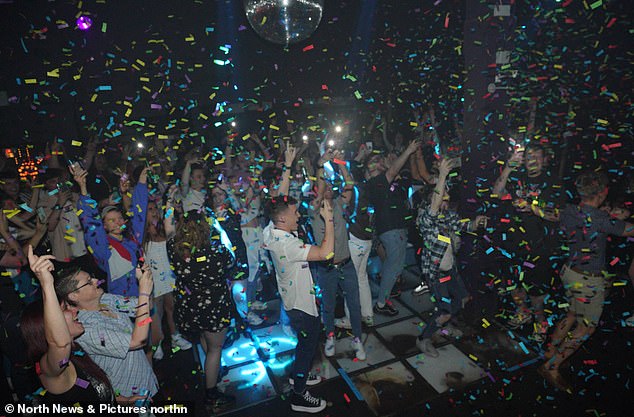 With Covid cases rising exponentially, there are fears that rapidly rising hospital admissions could force England back into a quasi-lockdown within weeks.

Some point to the example set in the Netherlands, where hospitality venues reopened on June 26 and all legal limits, barring a 1.5m social distancing rule, were scrapped.

Almost four weeks later, and positive Covid cases are rising by 30 per cent week on week, with hospitalisations also increasing.

Others fear the ‘pingdemic’ could put the brakes on reopening plans, as aound 1.7million people are currently thought to be isolating after being notified by app or contacted by Test & Trace.

One in five NHS Covid app users have turned off contact-tracing and a tenth have deleted it all together, according to a new YouGov survey.