Protesters were tear-gassed and beaten by police today after seizing key roads in Hong Kong to mark the 22nd anniversary of its handover from Britain to China.

The semi-autonomous city has been shaken by huge demonstrations in the past three weeks, with protesters demanding the withdrawal of a bill that would allow extraditions to the Chinese mainland. 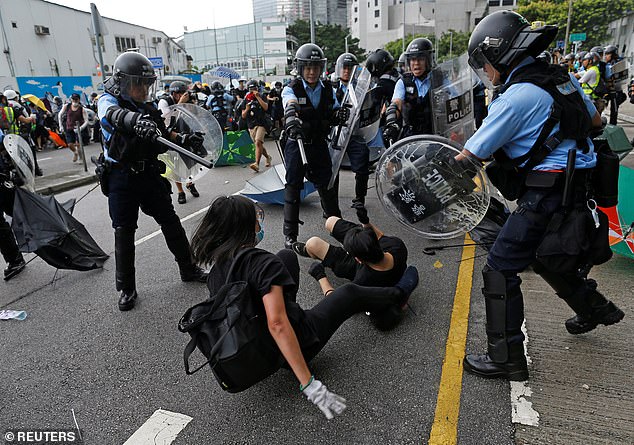 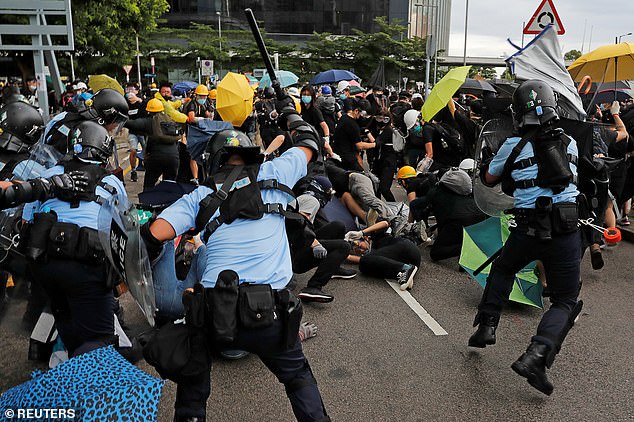 Shortly before a flag-raising ceremony to mark the handover, police swooped on protesters who had blockaded one street

Riot police with helmets and shields faced off against protesters in the Admiralty and Wanchai districts of the city.

Shortly before a flag-raising ceremony to mark the handover, police swooped on protesters who had blockaded one street, a reporter at the scene said, with at least one female protester seen bleeding from a head wound after the clashes.

The ongoing rallies are the latest manifestation of growing fears that China is stamping down on the city’s freedoms and culture with the help of the finance hub’s pro-Beijing leaders. 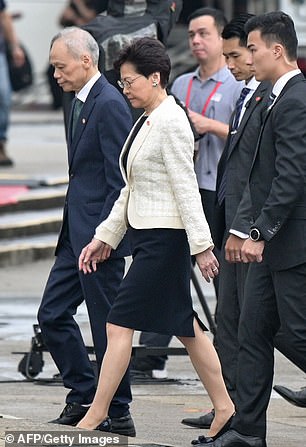 Although Hong Kong was returned from British to Chinese rule on July 1, 1997, it is still administered separately under an arrangement known as ‘one country, two systems’.

The city enjoys rights and liberties unseen on the autocratic mainland, but many residents fear Beijing is already reneging on that deal.

Pro-democracy activists have organised a march every handover anniversary, calling for greater democratic freedoms – such as the right to elect the city’s leader.

They have mustered large crowds in recent years – including a two-month occupation in 2014 – but have failed to win any concessions from Beijing.

This year’s rally comes against the backdrop of unprecedented anti-government protests over the past three weeks that have drawn millions and anger over police using tear gas and rubber bullets to clear crowds.

The spark for the current wave of protests was an attempt by chief executive Carrie Lam to pass the Beijing-backed extradition law, which she has now postponed following the huge public backlash.

But the demonstrations have morphed into a wider movement against Lam’s administration and Beijing. 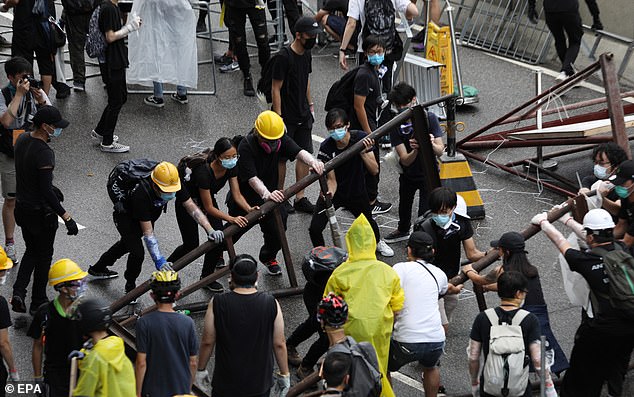 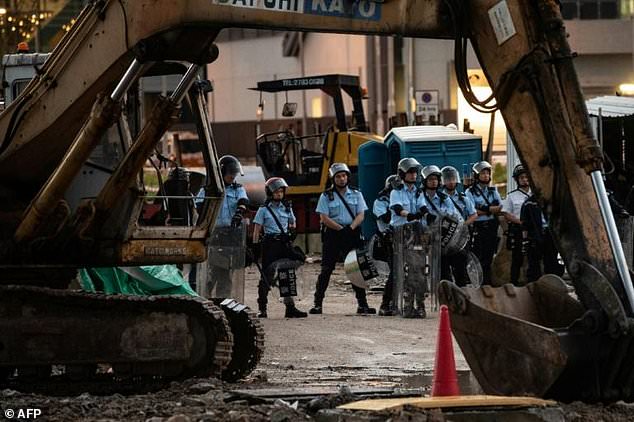 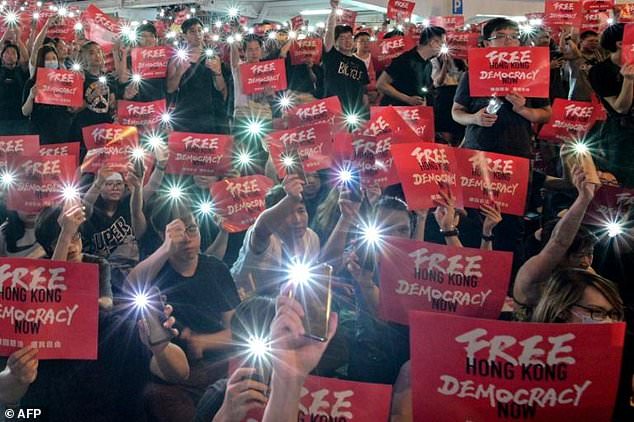 Lam — who has kept out of the public eye since her climbdown and has record low approval ratings — attended a flag-raising ceremony on the harbourfront early Monday, marking the moment the city returned to Chinese ownership 22 years ago, but she and other dignitaries observed from inside due to ‘inclement weather’.

The event had been scaled back and barriers erected around the square over fears that anti-government protesters might try to disrupt the event.

Protesters have multiple demands including that Lam permanently abandon the extradition bill and that police drop any charges against demonstrators arrested in recent weeks.

Sam Mu, an artist, was with a small group of friends waving black flags on Monday morning close to where the ceremony was due take place.

‘It’s a symbol of how are city is falling,’ he said. ‘Our city’s freedoms are shrinking, it’s going in a more authoritarian direction.’ 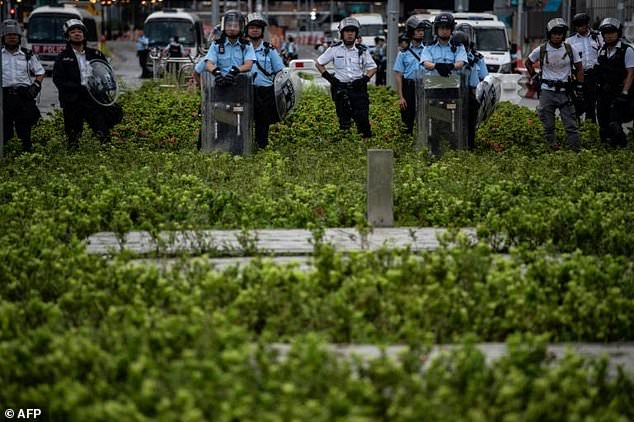 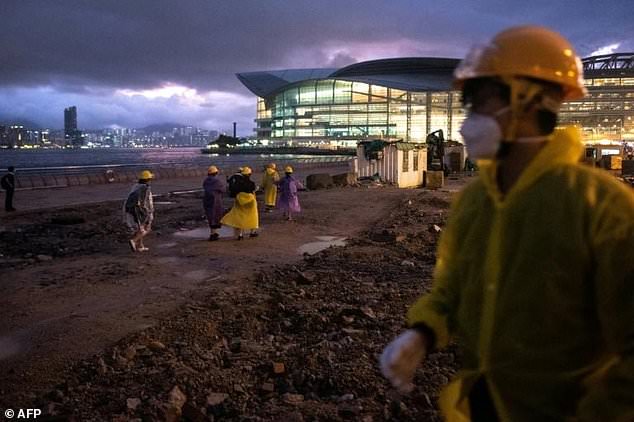 Activists, who are mainly young students, have vowed to keep up their civil disobedience campaign in the coming weeks

Activists, who are mainly young students, have vowed to keep up their civil disobedience campaign in the coming weeks.

‘Whatever happens we won’t lose heart, that’s why we’ll keep taking to the streets,’ Jason Chan, a 22-year-old accountant added. ‘Resistance is not a matter of a day or a week, it is long term.’

The pro-democracy rally is scheduled to take place on Monday afternoon, following the same route the two mass rallies last month took — from a park to the city’s legislature.

Permission for a separate pro-Beijing rally has been granted to start at the same time in the same park — raising fears of confrontations.

On Sunday, tens of thousands of pro-establishment protesters rallied in support of Hong Kong’s police. 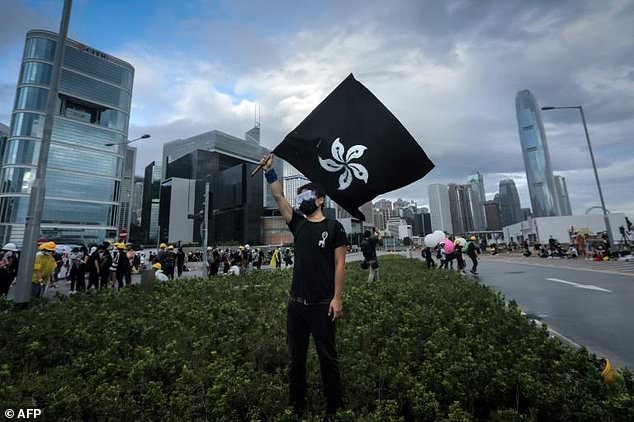 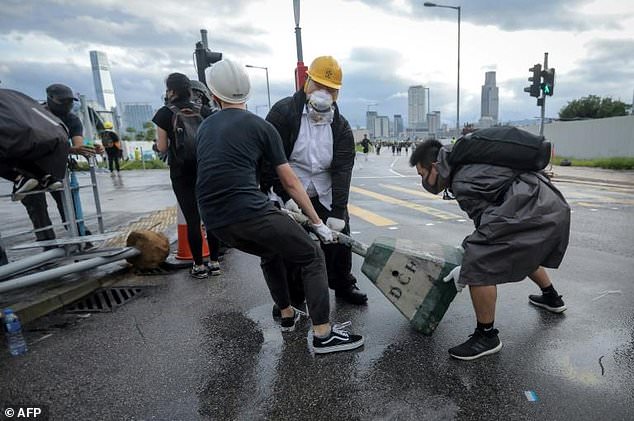 Protesters set up barricades outside the Legislative Council in Hong Kong