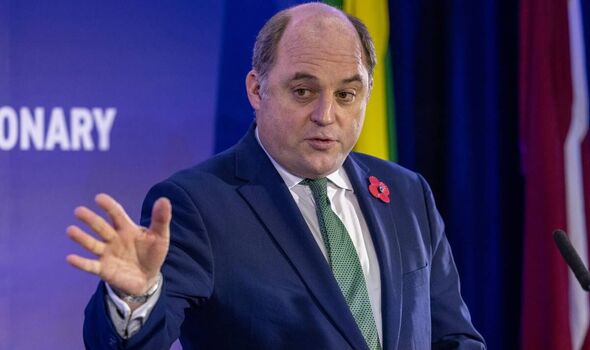 The head of Ukraine’s armed forces, General Valeriy Zaluzhny, said the Kremlin needs a way to stop the fighting, “by any means: shelling civilians, leaving our wives and children to freeze to death”. General Zaluzhny conceded Ukraine’s energy infrastructure is “on the edge” after numerous barrages over recent months.

Mr Wallace denied claims Britain and the West are being provocative.

The Defence Secretary said: “We collaborate on everything we do. We didn’t go looking to provide high-velocity missiles to Ukraine, but Russia started bombing civilian areas.

“The escalations are all in Russia’s hands. It has been buying hundreds of Iranian drones, almost like a V1 bomb effect to drive into infrastructure.

“For what reason? For the fact, Ukraine has stuck up for its people and its human rights?

“We’re always here. We are not here trying to attack Russia. Our job is to help Ukraine defend itself.”

Special hubs – known as “points of invincibility” that provide electricity and warmth – are being set up in Donetsk, where fighting rages, particularly around the Bakhmut area.

Donetsk Governor Pavlo Kyrylenko said, however: “The enemy understands this and is firing and launching missile strikes precisely at these heating points. There is a risk people may die of hypothermia.”

He said: “They now have to think again about how to get out of this situation.

“So most likely they are looking for ways to stop the fighting and get a pause by any means: shelling civilians, leaving our wives and children to freeze to death. I am not an energy expert but it seems we are on the edge.”

Ukraine’s energy provider said the system was suffering a “significant deficit of electricity” and emergency shutdowns had been applied in some areas in below freezing temperatures.