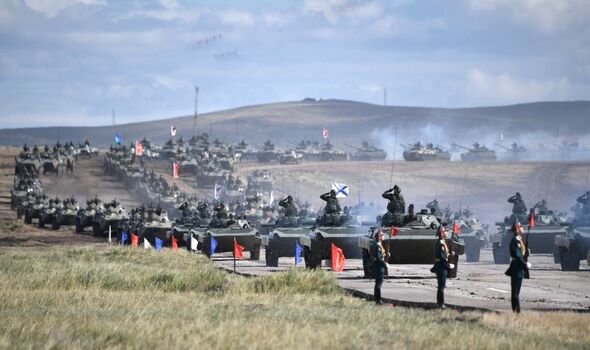 Russia has plans to launch a large-scale offensive in the new year, aiming to advance deep into Ukraine as far as Kyiv, warned Ukraine’s top commander. General Valery Zaluzhny, commander-in-chief of the armed forces, said the attack could come in February, at best in March, at worst at the end of January.

He warned that Putin’s drive to mobilize has worked and Russia is now reorganizing its troops to work back on embarrassing defeats this summer.

“They are 100 percent being prepared… I have no doubt they will have another go at Kyiv,” he told The Economist.

It comes as authorities reported explosions on social media in the capital Kyiv, southern Kryvyi Rih and northeastern Kharkiv today.

Air raid sirens were sounded across the country warning of a new devastating barrage of Russian strikes on critical energy facilities and infrastructure.

Odesa, located in the Black Sea, was also targeted, including the cities of Vinnytsia, Poltava, and the northern Sumy region.

There was no immediate word of casualties, as air defence systems went into operation across Ukraine.

It was also unclear what infrastructure had been hit.

“The enemy is massively attacking,” Oleksii Kuleba, head of Kyiv’s regional military administration, said in a post on Telegram.

Strikes targeting energy infrastructure have been a key part of Moscow’s new strategy to freeze Ukrainians into submission.

It follows on from yesterday, when Ukraine on Thursday sought to take the initiative around Donetsk, launching its biggest wave of strikes on the Russian-occupied city since 2014.

The missile strikes had followed reports that Russia is already preparing fresh advances from around the city, heading westward to capture more Ukrainian territory.

Donetsk is situated less than 15 kilometres from the front line but it has been spared incessant attacks that its suburbs on both sides of the front line came under in recent months.

The attack, which local territorial defence said injured at least nine people including a ten-year-old child, follows intensified fighting in the region.

The Institute for the Study of War think tank said it “continues to assess that Russian forces seek to complete the capture” of all of the region and the western outskirts of Donetsk where the Ukrainian shells were likely launched from.

Michael Kofman, a war analyst, said Russia may not have the firepower for a large-scale offensive.

“It is difficult to square expectations (implied in this interview) that Russia could restore offensive potential on a large scale, with Western estimates on dwindling stockpiles of artillery ammo & precision guided munitions,” he said.