Russian aluminium producer comes under fire for offering an extra $1.50 a day to women who come to work wearing skirts and makeup as part of ‘femininity marathon’

A Russian company has offered to pay its female employees an extra $1.50 (£1.19) a day if they wear skirts and make up while at work.

Tatprof, a Tatarstan-based aluminium producer that supplied the 2014 Sochi Winter Olympics, said it wanted to run the month-long ‘femininity marathon’ to ‘brighten up the workplace’.

However, the move has attracted heavy criticism with one social media user describing it as something from ‘the dark ages’ and another inviting management to wear makeup for themselves. 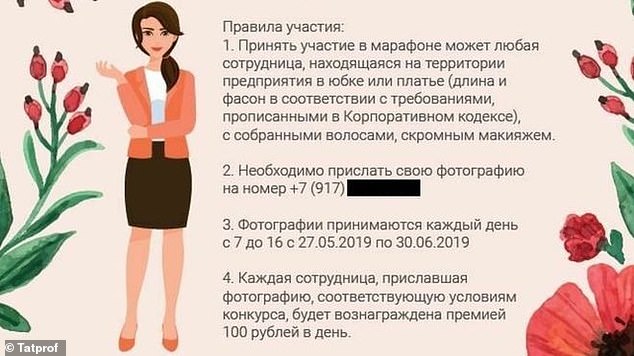 A Russian aluminium producer has offered to pay its female employees an extra $1.50 (£1.19) a day if they come to work wearing skirts and make up. (Pictured) The company message announcing the new policy and its month-long ‘femininity marathon’

Anastasia Kirillova, from the company’s communications department, told Russian media it was a ‘great way to rally a team’ that was 70 per cent male.

‘We hope the initiative will increase awareness of our women, allowing them to feel their femininity and charm when they opt for a skirt or a dress’, she said.

However, feminist blogger Zalina Marshenkulova hit back, stating it was ‘news from the Middle Ages’.

A twitter user called the company’s CEO Sergei Rachkov a ‘dinosaur’ and said ‘this is too shocking for 2019’.

‘A 100-rouble bonus for women who will come in short skirts and in makeup too…’, said another Tweet.

‘Indeed, why do we need feminism when one can just please men for money?’

The move was announced online with female employees invited to send photos of themselves to a given number in order to receive the bonus.

The scheme is intended to run until the end of June.