A prominent investigative reporter has been arrested in Russia on charges of drug dealing, prompting an outcry from the country’s community of embattled independent journalists who say he is being set up as punishment for exposing corruption.

Ivan Golunov, who writes for the independent news site, Meduza, and whose work has exposed corruption and suspicious dealings by officials and organised criminals, was arrested in Moscow on Thursday. Police have said they stopped him on the street and found he was carrying five bags of mephedrone, a recreational drug popular at nightclubs.

Police said they found more of the drug when they searched Golunov’s apartment, and charged him with “intent to distribute,” an offense that carries a possible prison sentence of 10 to 20 years.

Golunov’s editors at Meduza swiftly denounced his arrest, saying they were certain he was being framed.

“We are convinced that Ivan Golunov is innocent,” the site’s editors, Galina Timchenko and Kolpakov wrote in a statement. “Moreover, we have grounds to suggests that Golunov is being persecuted over his journalistic activity. We know that in recent months Vanya has been getting threats; we know in connection with which text he was preparing; we have a suspicion from who. We will find out by whose will Vanya is being persecuted and we will make this information public.”

Meduza is a popular site that frequently publishes articles critical of Russian authorities. It is based in Latvia in order to shield itself from attacks in Russia. 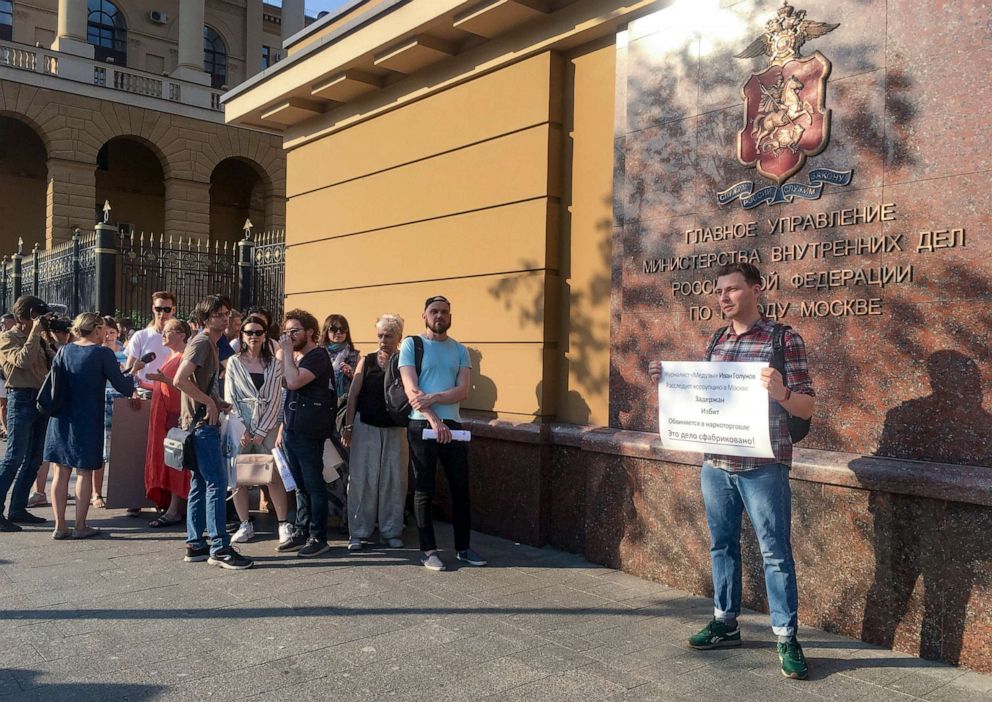 Through his lawyer, Dmitry Djulai, Golunov accused police of planting the drugs during the arrest. He also said that officers punched and kicked him while questioning him in the police station, and initially prevented him from contacting a lawyer. When his lawyer arrived, police refused to take swabs of Golunov’s hands or his rucksack, which could show whether he had handled the drugs, Djulai said.

Police also released photographs purporting to show equipment from a drugs laboratory that they suggested had been taken at Golunov’s home, but friends said the apartment in the photos was not his and had been taken somewhere else. Russia’s Interior Ministry later was forced to admit the photos had been taken in a different building and said it was investigating why they had been published.

Golunov’s arrest has prompted shock and outrage from across a broad spectrum of journalists and commentators in Russia, as well as expressions of concern abroad. Journalists and other protesters Friday began holding one-man pickets outside Interior ministry offices in a number of Russian cities demanding Golunov’s release. Police then detained at least a dozen people at the protests, among them some of Russia’s most well-known independent journalists.

Reporters Without Borders, an international advocacy group for journalists, said the police’s “extremely strange behavior” suggested that Golunov has been arrested “on a trumped-up charge.” Johann Bihr, the head of RSF’s Eastern Europe and Central Asia desk said that if this was the case “it would mark a significant escalation in the harassment of the country’s independent media.”

The Kremlin’s spokesman, Dmitry Peskov said he had “only just heard” of Golunov’s arrest during his daily briefing call Friday. Asked whether the case could be fabricated, Peskov pointed to the photos released by police, which have since been shown to be misleading.

Planting drugs has long been a tactic of Russia’s security services for jailing or discrediting opponents, but it more frequently used to target political activists rather than journalists. Earlier this year, Oyub Titiev, the director of the Chechnya branch of human rights NGO, Memorial, was convicted on drugs possession charges in another case that was widely condemned by international rights groups as fabricated.

Golunov is considered one of Russia’s most respected investigative reporters.

Recently he has investigated family members of Moscow’s deputy mayor, who had acquired property worth tens of millions of dollars and he has also detailed Moscow’s plans to send its waste to surrounding regions, a controversial issue that has sparked protests. Golunov also recently wrote a long article exposing how figures connected to senior officials had tried to take control of Russia’s funeral industry.

The independent Russian site, Mediazona, which frequently focuses on rights abuses, on Friday said the case against Golunov was intended to intimidate Russia’s non-state media.

“This is a blow not only on Ivan himself and his colleagues at Meduza, it is a blow against everyone who continues to work honestly, to collect and convey disclosures of important information about life in Russia,” the site’s editors wrote in an op-ed.