Sadiq Khan facing backlash from Londoners over his 'wasteful' US trip

‘Sadiq Khan is touring America while London falls to knife crime’: Mayor faces backlash over £10M taxpayer-funded trip as critics say they’d ‘rather he spent it on Hammersmith Bridge’ – and accuse him of hypocrisy for ‘encouraging international air travel’

Sadiq Khan has faced a furious backlash from Londoners concerned about spiralling crime rates and outstanding projects in the capital as he continues his taxpayer-funded tour of the United States.

London’s mayor was slammed by social media users who berated the whistle-stop tour as a ‘waste of money’, instead recommending those funds were allocated to the restoration of Hammersmith Bridge.

Others said more pressing issues included knife crime and murder rates in the capital, while eco-campaigners pointed out the hypocrisy in Mr Khan pleading for international tourists while being quick to praise his own green credentials as mayor.

Mr Khan’s office pledged £10m in tourism promotion in the Greater London Authority’s proposed 2022/23 budget, while it is understood millions have been raised by industry contributors and value-in-kind contributions for the ‘Let’s Do London’ campaign.

Although it’s not yet clear exactly how his US trip has been funded, past mayoral excursions to Pakistan and India in 2018, and Davos in 2017, were paid for by the taxpayer.

Mr Khan also shared a tweet thanking United Airlines for ‘getting me to NYC safely’, prompting speculation the £12bn airline provided free or discounted flights for the trade mission. His office did not immediately respond to requests for comment.

The £7m ‘Let’s Do London’ international marketing campaign will attempt to drive foreign tourists back to London for 2022 – who accounted for up to 84 per cent of the capital’s tourism spend prior to the pandemic.

The developments come as Mr Khan was described as the ‘rock star of world mayors’ by his New York City counterpart Eric Adams on the second of a four-day trip which will see him visit New York, Silicon Valley, San Francisco, and Los Angeles in a bid to boost London’s post-pandemic tourism industry.

Khan had earlier reassured Americans on television that ‘Covid cases numbers are down, vaccination numbers are up’ and that London was safe to visit on NBC’s Morning Joe.

He added that the Queen’s Platinum Jubilee celebrations and open air gigs made it a ‘good time’ for potential tourists to visit London. 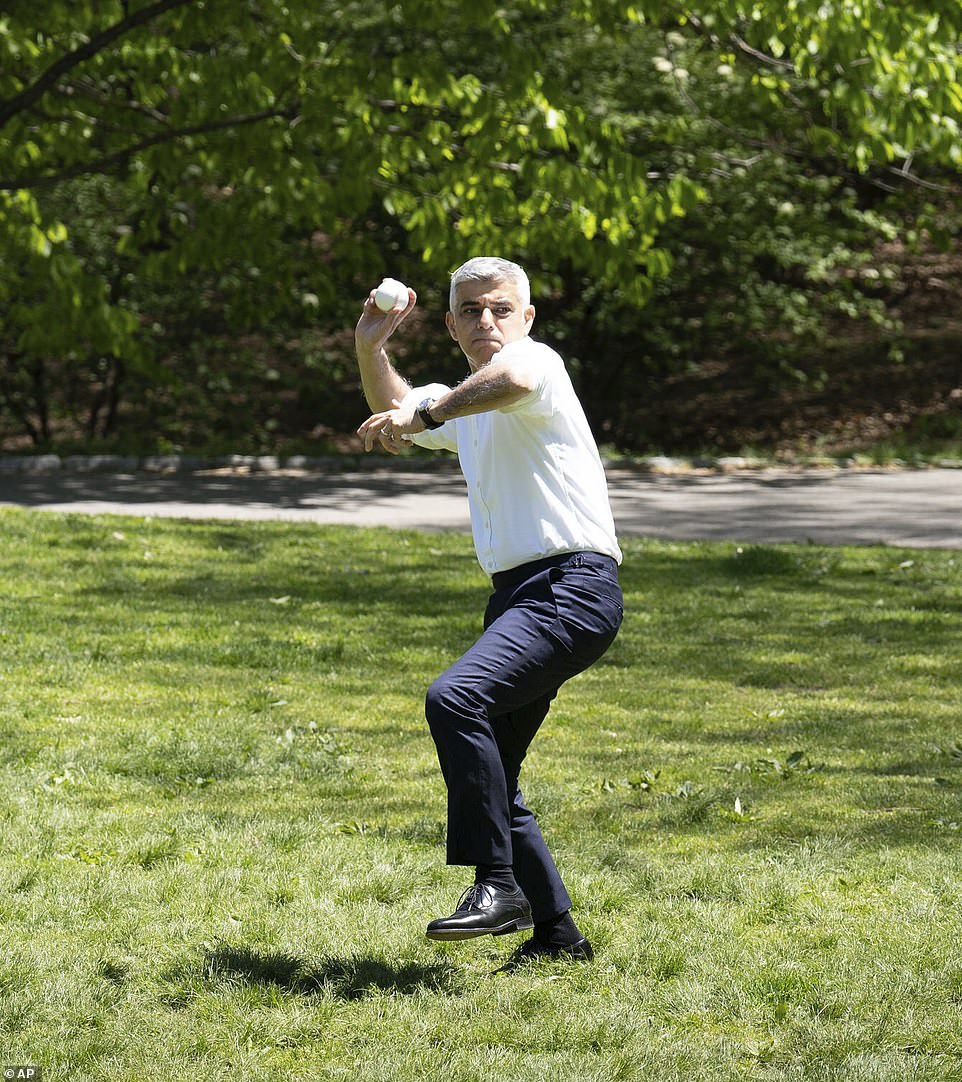 Sadiq Khan (pictured in Central Park, New York on Monday) has faced a furious backlash from Londoners concerned about spiralling crime rates and outstanding projects in the capital as he continues his whistle-stop tour of the United States 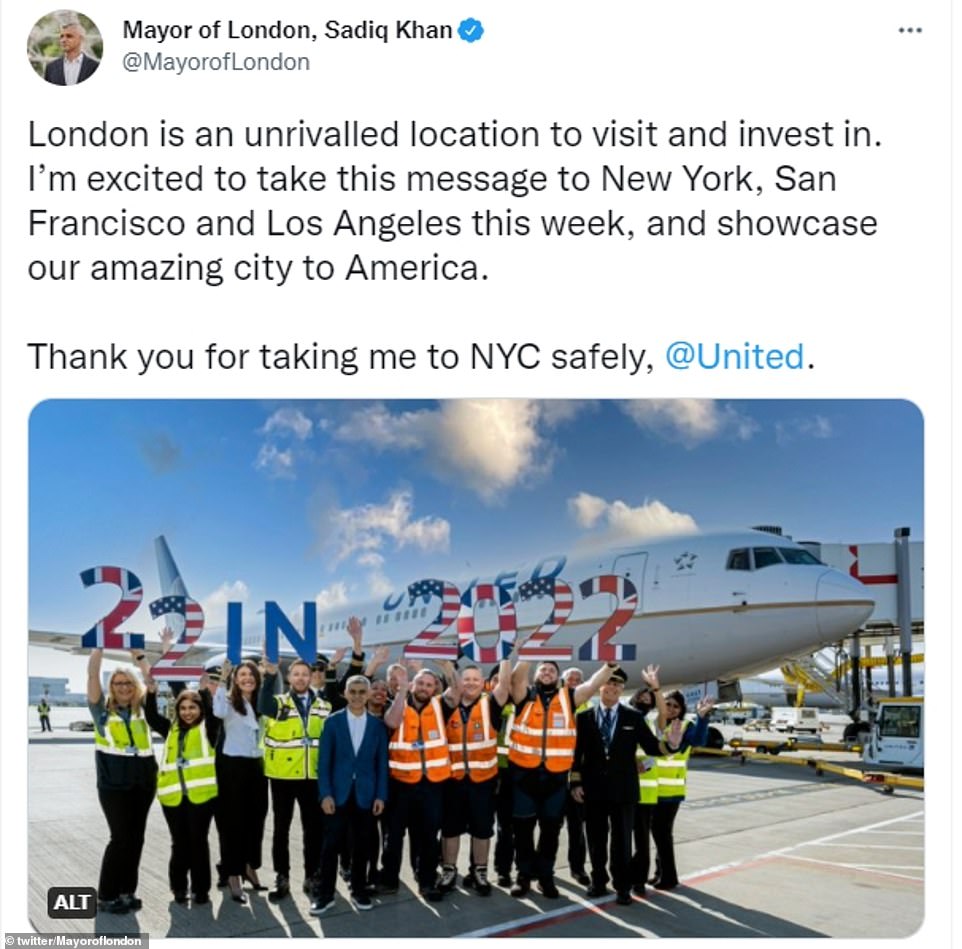 Sadiq Khan also shared a tweet thanking United Airlines for ‘getting me to NYC safely’, prompting speculation the £12bn airline provided flights for the trade mission free of charge. His office did not immediately clarify if this was the case

London’s mayor was slammed by social media users who berated the trip as a ‘waste of money’, while others said more pressing issues included knife crime and murder rates in the capital

Mr Khan will today head to California to meet representatives from Google and LinkedIn in San Francisco, before travelling to Los Angeles to promote London’s film industry.

After a press conference with Adams yesterday, Mr Khan went to Times Square and was flanked by Coldstream Guards and the cast of the Broadway Musical, Six, based on the wives of Henry VIII.

He then met with former New York City mayor and presidential candidate Michael Bloomberg on Sunday as he began a tour of the US meant to promote London’s ailing post-pandemic tourism industry – which lost £7.4billion in 2020 alone.

The Labour mayor has launched a £10 million tourism campaign, ‘Let’s Do London’, in a bid to attract high-spending US tourists back to the UK capital after Covid.

London welcomed more than 3million US tourists in the year running up to the first lockdown in March 2020. In 2019, these visitors contributed £2.45bn to London’s tourism, hospitality and cultural industries alone.

Mr Khan yesterday used his Twitter account to post a picture of him crossing a New York street with the iconic Chrysler building in the background.

The image was accompanied with a picture of Khan and Bloomberg – who was NYC mayor from 2002 to 2013 – in a coffee house catching up. 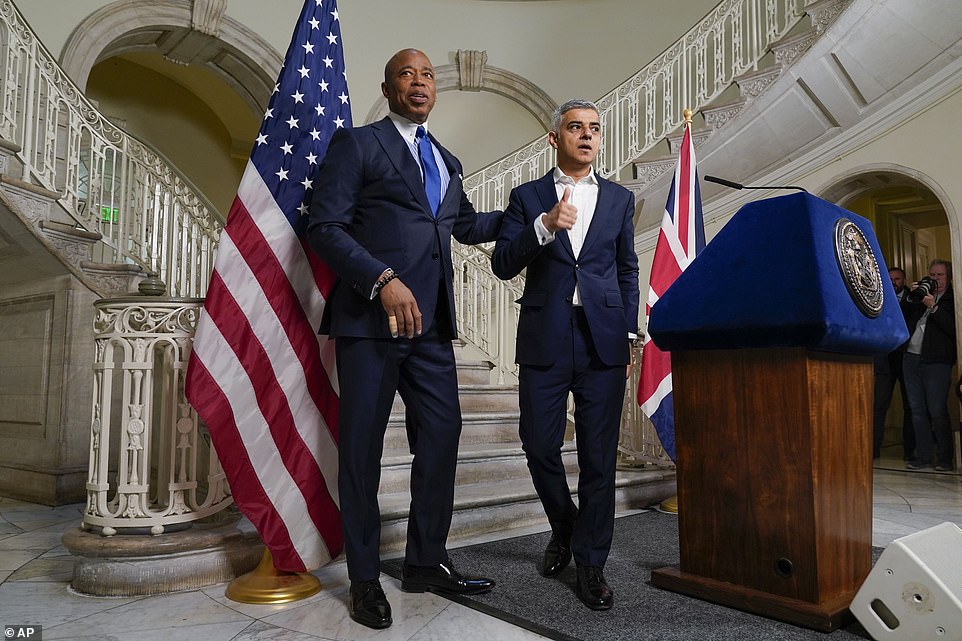 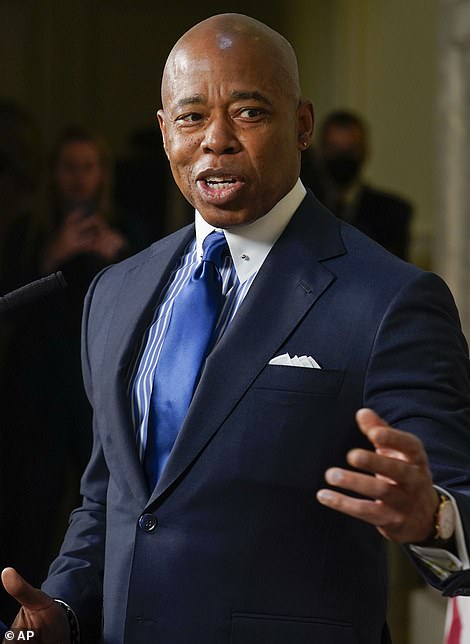 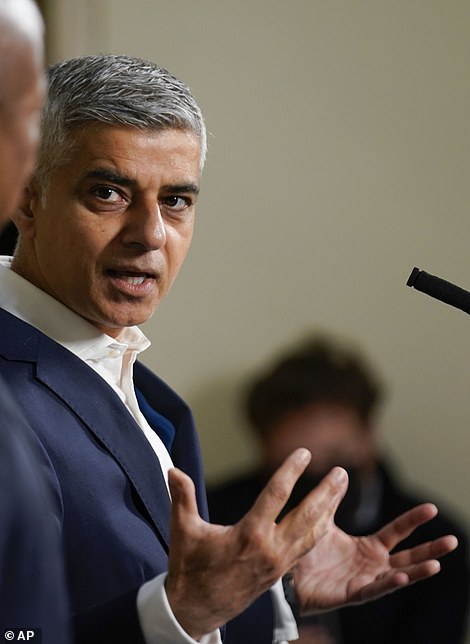 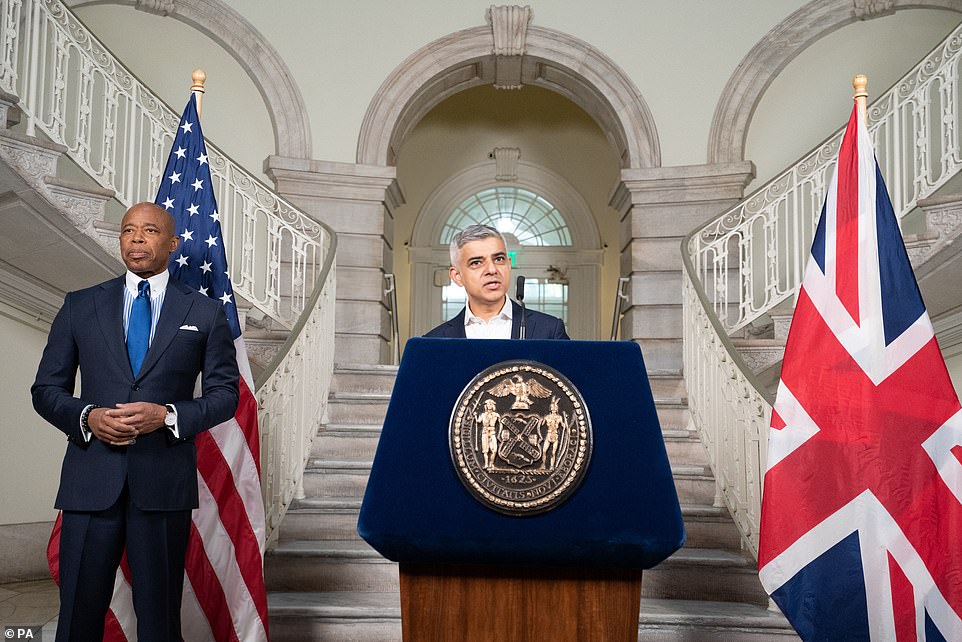 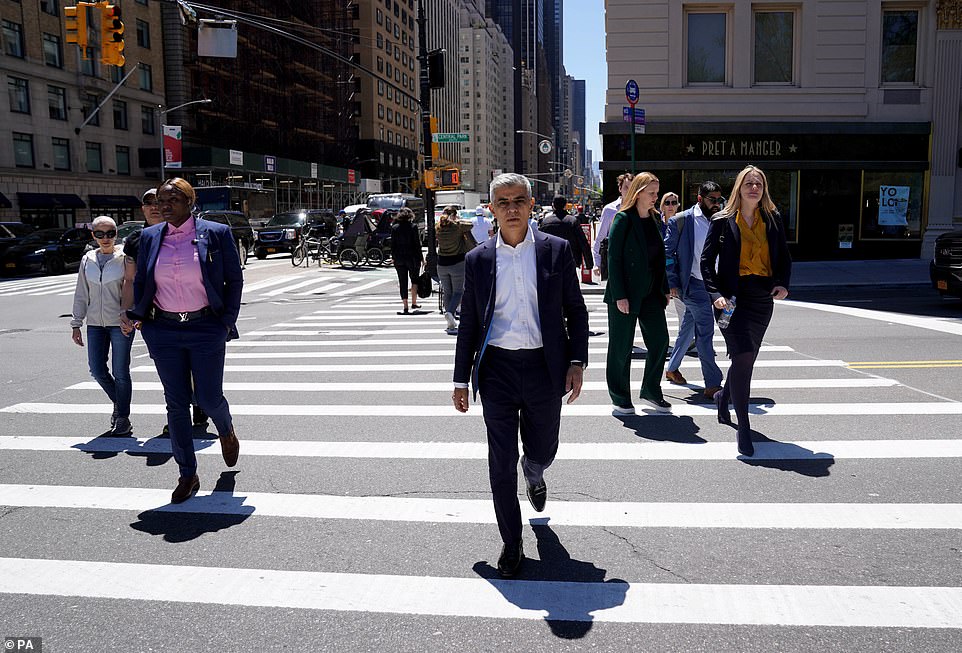 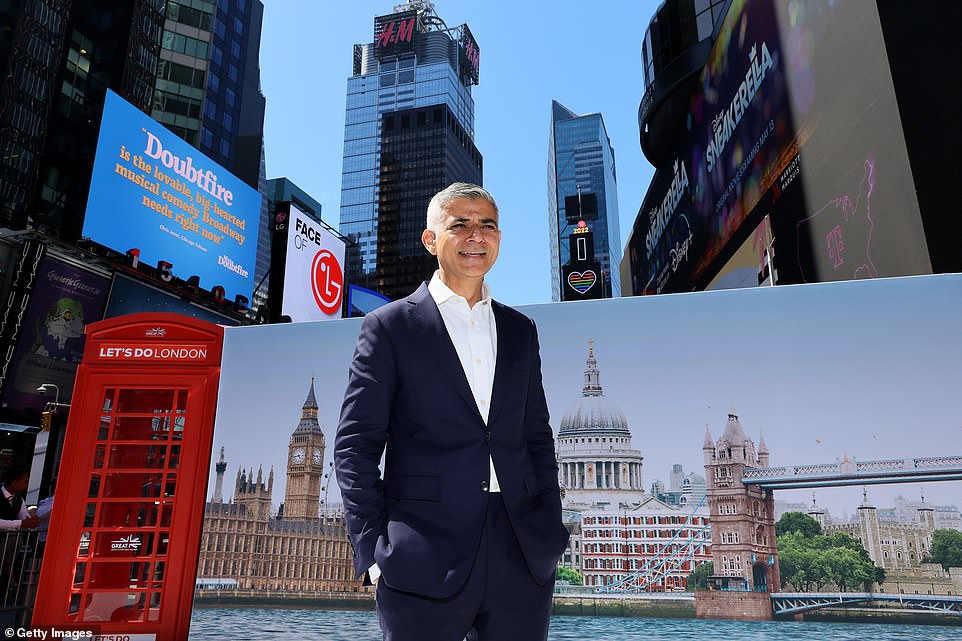 Khan smiles for cameras as attends the ‘Let’s Do London’ US tourism campaign, launched in New York’s Time Square today 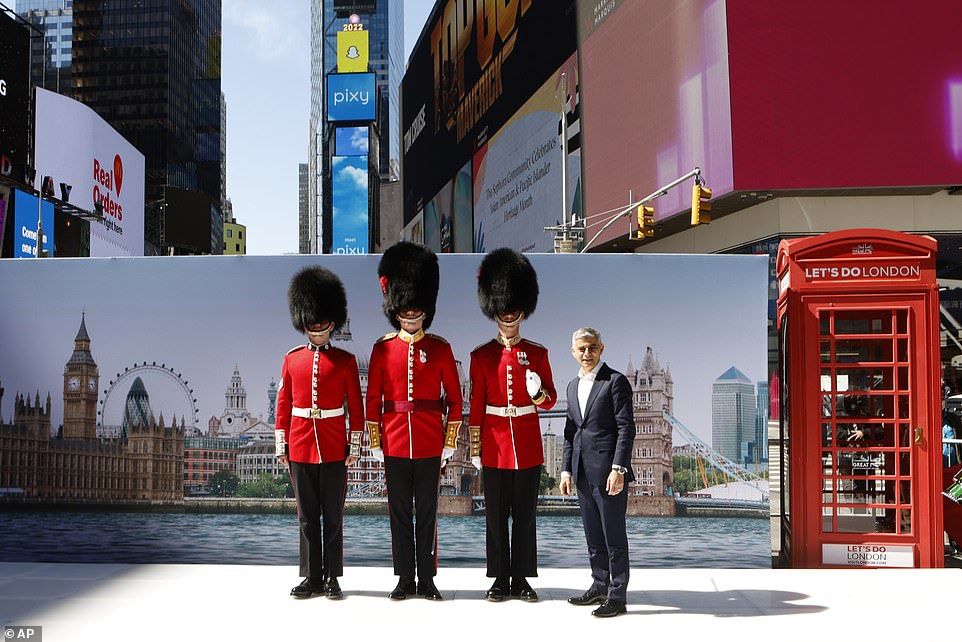 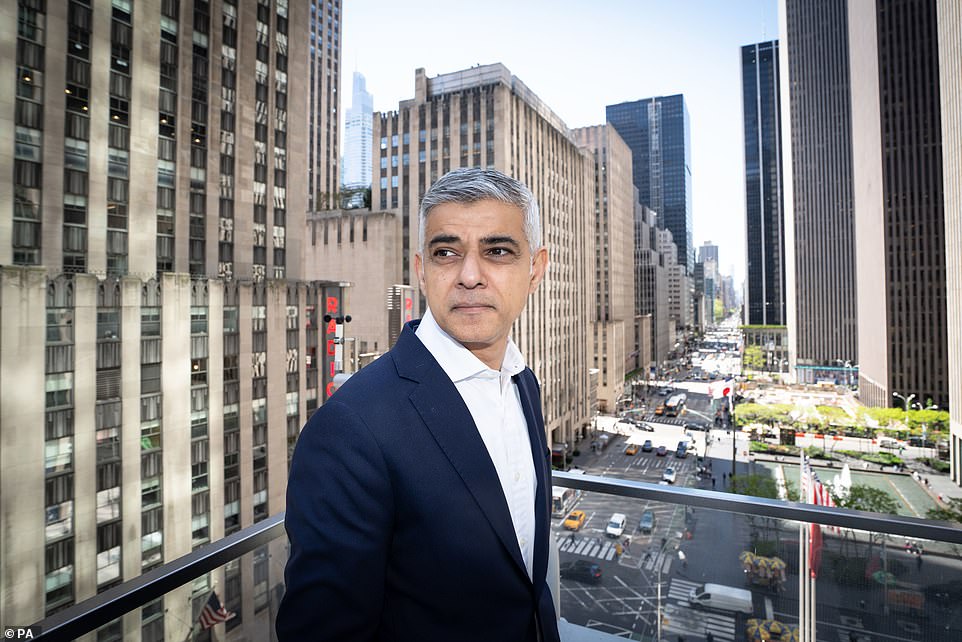 Khan looks out over the Avenue of The Americas in New York City today. He is visiting New York before making his way to San Francisco, Silicon Valley and Los Angeles 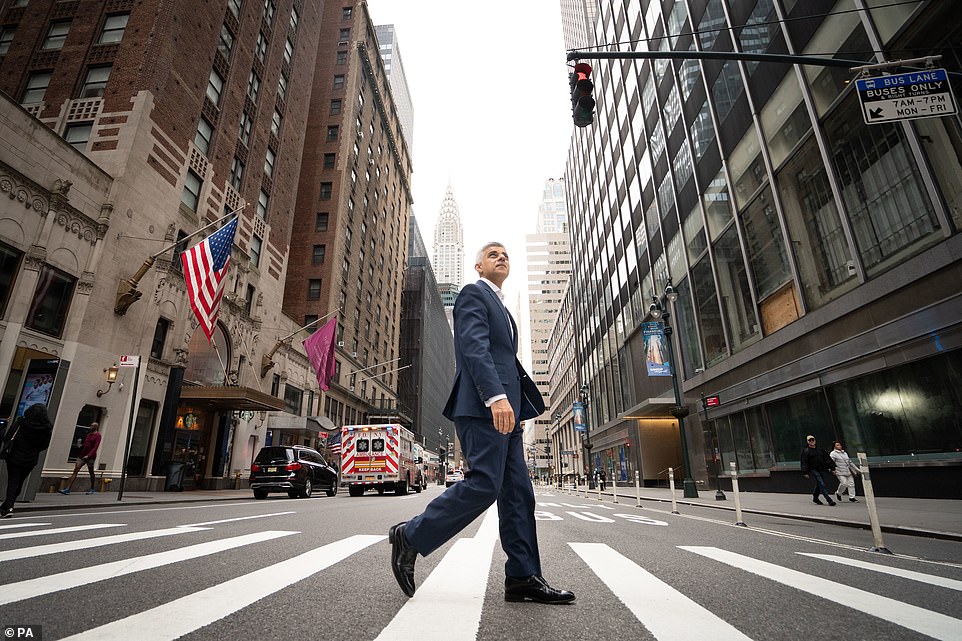 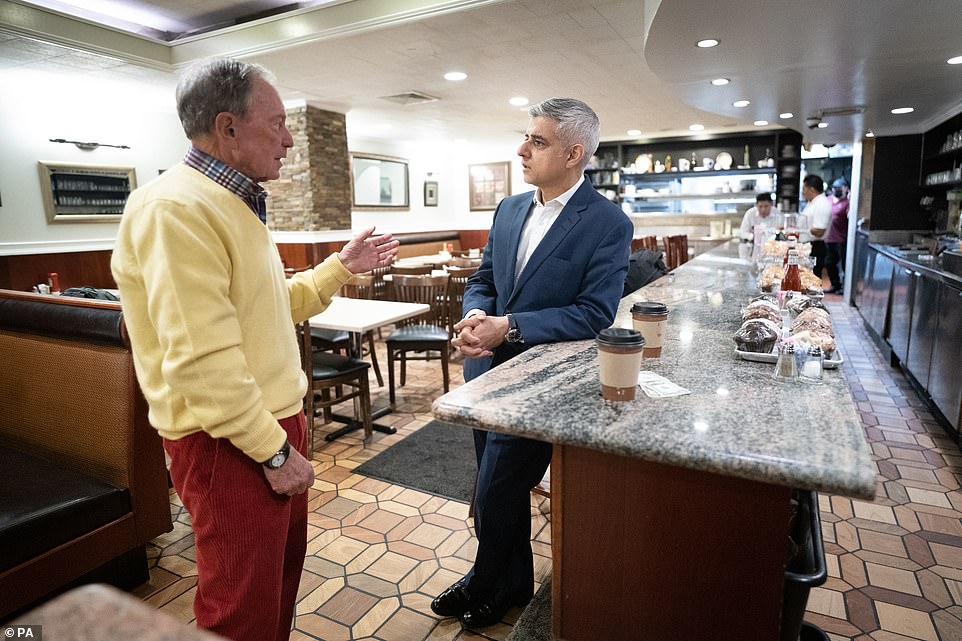 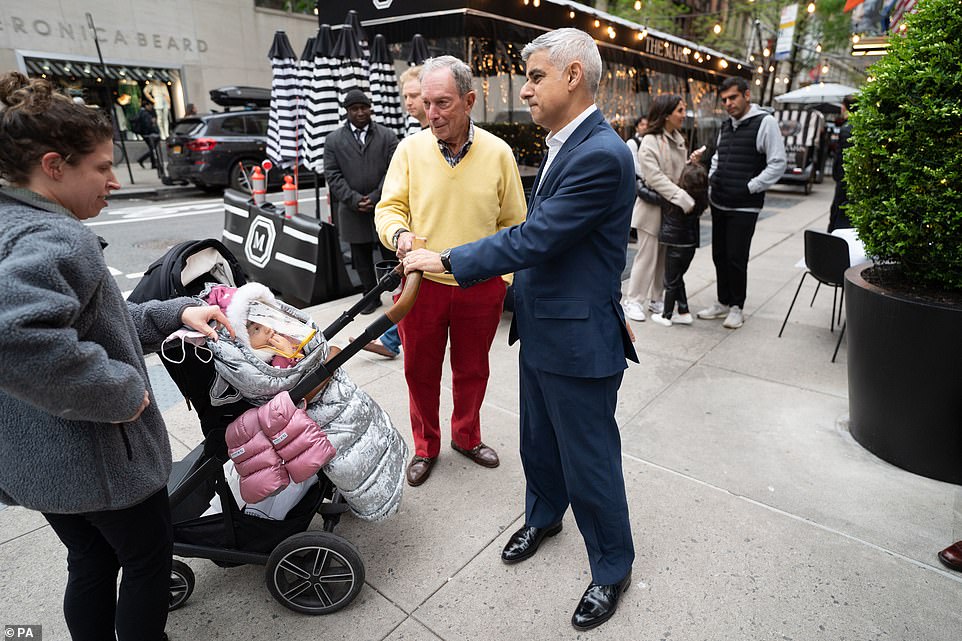 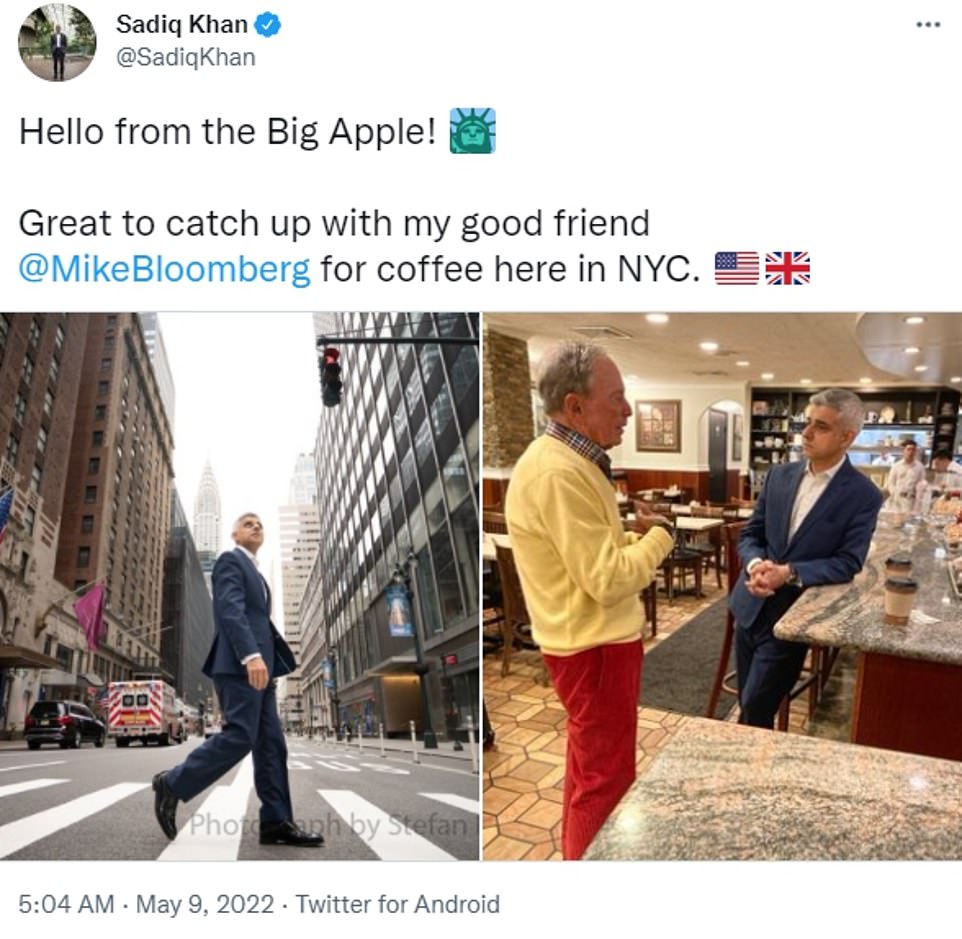 Khan spoke of the affection between the mayors and called the media mogul billionaire a ‘good friend’.

The Mayor of London has said he hopes to use the trip, which will also include visits to California, to attract investment to the capital.

He will also discuss pandemic recovery with senior politicians.

London was hit hard by the coronavirus pandemic, losing £7.4 billion of international tourist spend in 2020 alone.

Khan will then travel to the West Coast of the United States to meet representatives from Google and LinkedIn in San Francisco, before travelling to Los Angeles to promote London’s film industry.

Khan said he intends to use the trip to ‘bang the drum for London’.

‘It’s really important that I bang the drum for London, that’s what I intend to do.’ 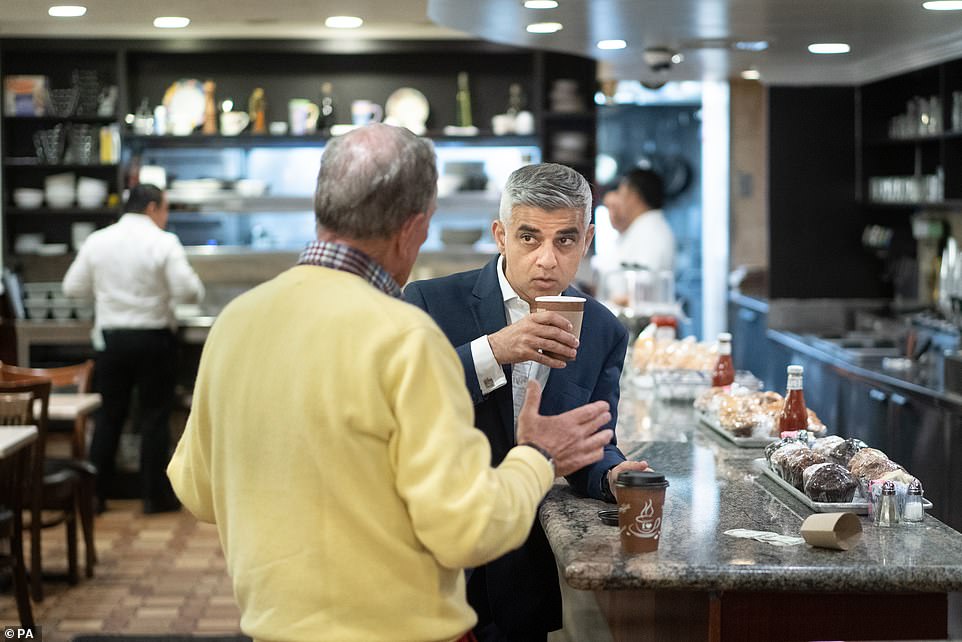 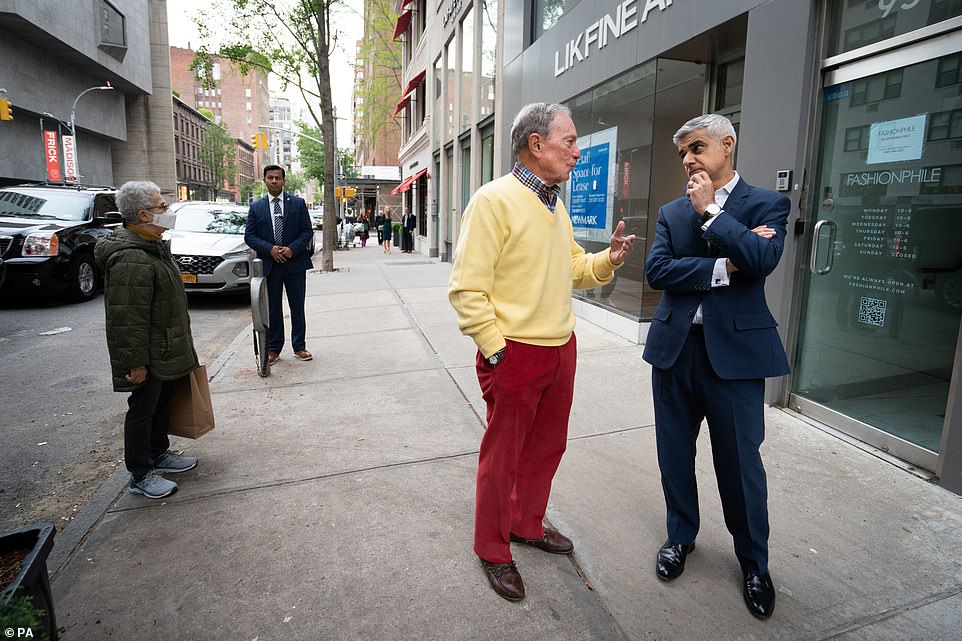 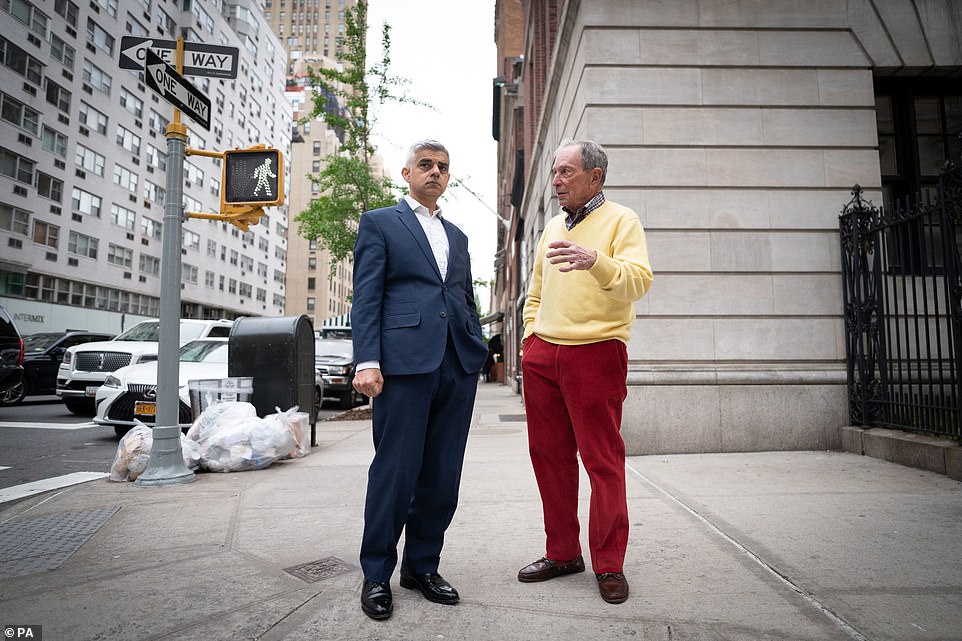 The move comes just days after Sadiq Khan wrote a letter to Prime Minister Boris Johnson, published in the Independent, to renew his campaign for rent controls in the capital.

In the letter, Khan implores his predecessor to implement a two-year rent freeze for residents in the capital.

Renting in the capital has continued to become more expensive with many London properties now as expensive as New York City to rent.

New York City already has a form of rent control with caps on rent for a small number of buildings supplemented by a larger number of apartments which are only allowed to increase by a small amount each year – known as rent stabilization.