Sajid Javid apologises for saying people should not 'cower' from Covid

Sajid Javid has apologised for a tweet suggesting people should not ‘cower’ from Covid-19, after bereaved families called his comment ‘deeply insensitive’.

The Health Secretary on Sunday deleted the tweet, saying it ‘was a poor choice of words and I sincerely apologise’.

In the message, posted a day earlier, Mr Javid announced he had made a ‘full recovery’ from a coronavirus infection and said his symptoms ‘were very mild, thanks to amazing vaccines.’

‘Please, if you haven’t yet, get your jab, as we learn to live with, rather than cower from, this virus,’ he added.

But Mr Javid was forced to apologise after Covid-19 Bereaved Families for Justice joined MPs in branding his ‘cower’ remark as insulting to people who have shielded and those who stayed at home to protect society.

On Sunday, he tweeted: ‘I was expressing gratitude that the vaccines help us fight back as a society, but it was a poor choice of word and I sincerely apologise.

‘Like many, I have lost loved ones to this awful virus and would never minimise its impact.’ 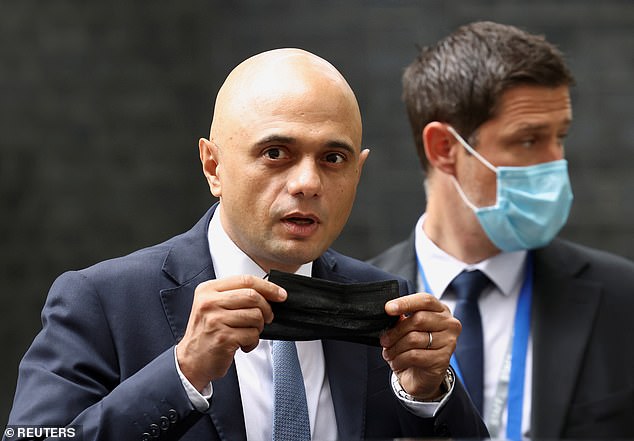 The Health Secretary Sajid Javid has apologised for a tweet suggesting people should no ‘cower’ from Covid-19, after bereaved families called his comment ‘deeply insensitive’ [File photo]

Co-founder of Covid-19 Bereaved Families for Justice Jo Goodman had said Mr Javid’s original comment was ‘deeply insensitive on a number of levels’.

‘Not only are they hurtful to bereaved families, implying our loved ones were too cowardly to fight the virus, but they insult all those still doing their best to protect others from the devastation this horrific virus can bring.

‘Words matter and the flippancy and carelessness of this comment has caused deep hurt and further muddied the waters of the Government’s dangerously mixed messaging,’ she said.

The group has welcomed Mr Javid’s remarks while urging him to join them for a visit to the Covid memorial wall in London to ‘understand the hurt and insult’ caused by his ‘poor choice of word’ remains, Sky reported.

Mr Lammy wrote: ‘129,000 Brits have died from Covid under your Government’s watch.

‘Don’t denigrate people for trying to keep themselves and their families safe.’

‘His careless words have insulted every man, woman and child who has followed the rules and stayed at home to protect others,’ she said in a statement.

‘He owes them all, especially the millions who are shielding, an apology.’

Public health expert Devi Sridhar said his remarks would be ‘painful to read for those who were severely ill’ and those who lost loved ones to Covid-19.

The professor at the University of Edinburgh wrote: ‘It wasn’t because they were weak, just unnecessarily exposed to a virus.

‘And wanting to avoid getting Covid isn’t ‘cowering’ – it’s being sensible & looking out for others.’

Mr Javid, who has received two doses of the vaccine, received a positive test result on July 17 for a coronavirus infection that ultimately sent Prime Minister Boris Johnson and Chancellor Rishi Sunak into isolation as his close contacts.

Mr Johnson’s quarantine in his Chequers country residence is expected to finish at the end of Monday, as is Mr Sunak’s.

The pair initially tried to avoid isolation by saying they were taking part in a testing pilot, but backed down in the face of widespread public criticism.

Mr Johnson’s quarantine in his Chequers country residence is expected to end late on Monday.

Mr Javid’s recovery follows junior health minister Jo Churchill announcing on Thursday that she was pinged by the NHS coronavirus app and will be required to quarantine.

Labour leader Keir Starmer is also isolating for the fourth time after one of his children tested positive for coronavirus.

The new Health Secretary has been seen as more strongly in favour of lifting coronavirus restrictions and most remaining legal rules in England were ended last Monday.

A total of 31,795 cases were reported in the UK on Saturday – a 41 per cent drop on last week – with over 46million people now having received their first dose of the jab.

More than 36million people have also been given their second dose, according to Public Health England (PHE) data.