Saudi-led coalition kit on Yemen island where base being built

A Saudi-led coalition fighting in Yemen today admitted having equipment on a mysterious air base being built on a volcanic island off Yemen.

But the coalition did not name who was building the facility across the Mayun Island in the Bab el-Mandeb Strait in a statement released on the state-run Saudi Press Agency.

The statement said the equipment, which it did not identify, helps the coalition back Yemen’s internationally recognized government against the Iranian-backed Houthi rebels who now hold the country’s capital, Sanaa.

It said the United Arab Emirates, which remains a coalition member after largely withdrawing from the war in 2019, was ‘providing air support in defense’ of the Yemeni city of Marib, the target of an ongoing Houthi offensive. The statement called any claim of Emirati troops on Mayun ‘baseless and unfounded.’ 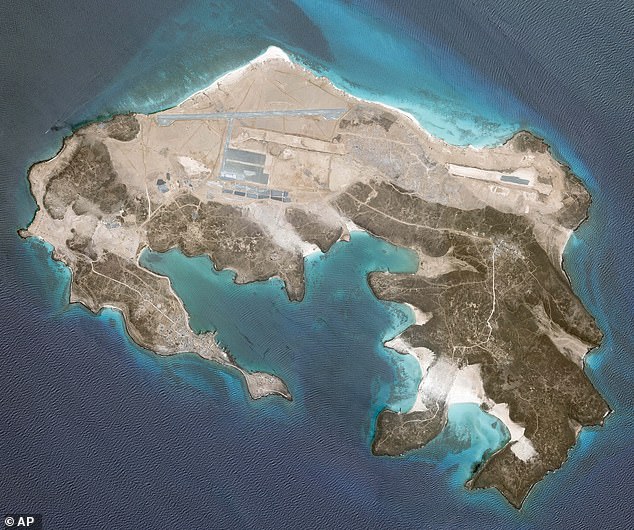 The runway on Mayun Island allows whoever controls it to project power into the strait and easily launch airstrikes into mainland Yemen, convulsed by a yearslong bloody war. It also provides a base for any operations into the Red Sea, the Gulf of Aden and nearby East Africa.

‘This does seem to be a longer-term strategic aim to establish a relatively permanent presence,’ said Jeremy Binnie, the Mideast editor at the open-source intelligence company Janes who has followed construction on Mayun for years. It’s ‘possibly not just about the Yemen war and you’ve got to see the shipping situation as fairly key there.’

The island sits on one of the world’s crucial maritime chokepoints for both energy shipents and commercial cargo.

Satellite images from Planet Labs Inc. obtained by The Associated Press showed dump trucks and graders building a 1.85 kilometer (6,070-foot) runway on the island on April 11. By May 18, that work appeared complete, with three hangars constructed on a tarmac just south of the runway. 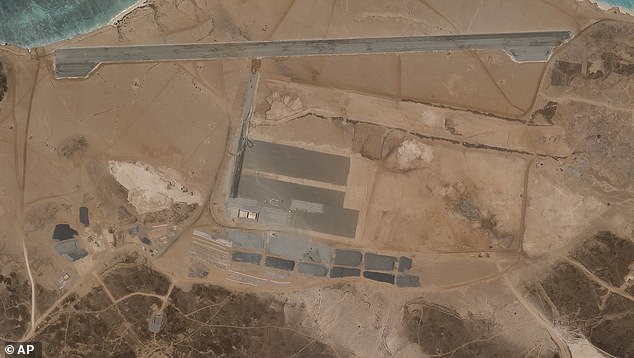 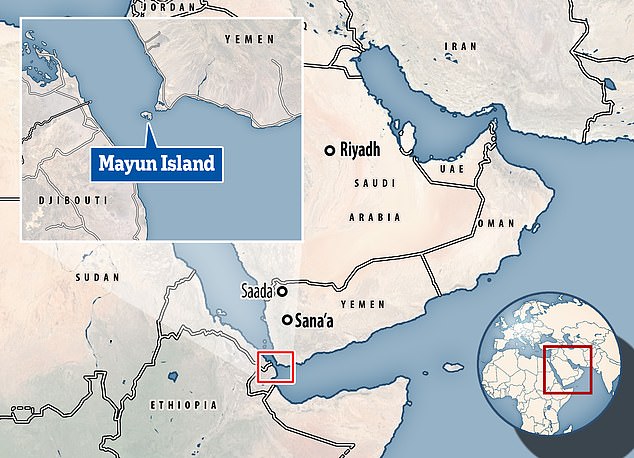 The runway on Mayun Island allows whoever controls it to project power into the strait and easily launch airstrikes into mainland Yemen, convulsed by a yearslong bloody war. It also provides a base for any operations into the Red Sea, the Gulf of Aden and nearby East Africa

A runway of that length can accommodate attack, surveillance and transport aircraft. An earlier effort begun toward the end of 2016 and later abandoned had workers try to build an even-larger runway over 3 kilometers (9,800 feet) long, which would allow for the heaviest bombers.

Shipping data links the Emirates to an earlier, abandoned effort to build a runway there.

Military officials with Yemen’s internationally recognized government, which the Saudi-led coalition has backed since 2015, say the UAE is building the runway.

The officials, speaking to the AP on condition of anonymity as they didn’t have authorization to brief journalists, say Emirati ships transported military weapons, equipment and troops to Mayun Island in recent weeks.

This is despite the UAE announcing in 2019 it was withdrawing its troops from a Saudi-led military campaign battling Yemen’s Houthi rebels. The AP reports did not mention any Emirati troop presence on the island.

The Saudi statement comes after rising anger from Yemeni officials over the air base being built on Mayun. The UAE has not responded to repeated requests for comment.

The military officials said recent tension between the UAE and Yemeni President Abed Rabbo Mansour Hadi came in part from an Emirati demand for his government to sign a 20-year lease agreement for Mayun. Emirati officials have not acknowledged any disagreement. 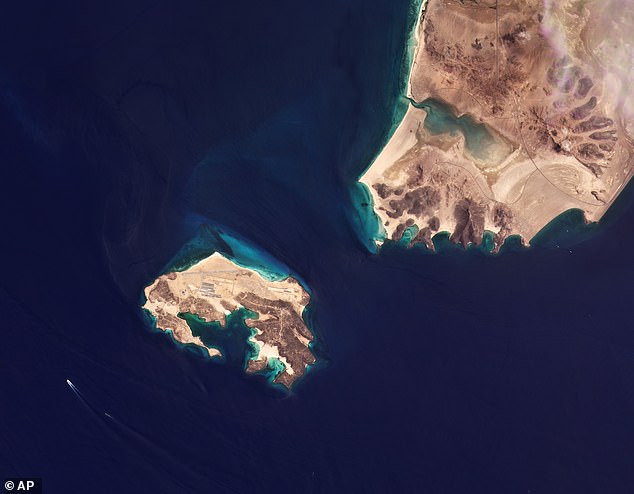 The apparent decision by the Emiratis to resume building the air base comes after the UAE dismantled parts of a military base it ran in the East African nation of Eritrea as a staging ground for its Yemen campaign. Pictured: Mayon Island off the cast of Yemen

Tugboats associated with Dubai-based Echo Cargo & Shipping LLC and landing craft and carriers from Abu Dhabi-based Bin Nawi Marine Services LLC helped bring equipment to the island in that first attempt, according to tracking signals recorded by data firm Refinitiv. Satellite photos at the time show they offloaded the gear and vehicles at a temporary beachside port.

Echo Cargo & Shipping declined to comment, while Bin Nawi Marine Services did not respond to a request for comment. Recent shipping data shows no recorded vessels around Mayun, suggesting whoever provided the sealift for the latest construction turned off their boats’ Automatic Identification System tracking devices to avoid being identified.

Construction initially stopped in 2017, likely when engineers realized they couldn´t dig through a portion of the volcanic island´s craggy features to incorporate the site of the island’s old runway. The building restarted in earnest on the new runway site around Feb. 22, satellite photos show, several weeks after President Joe Biden announced he would end U.S. support for the Saudi-led offensive against the Houthis.

The apparent decision by the Emiratis to resume building the air base comes after the UAE dismantled parts of a military base it ran in the East African nation of Eritrea as a staging ground for its Yemen campaign.

While the Horn of Africa ‘has become a dangerous place’ for the Emiratis due to competitors and local war risks, Mayun has a small population and offers a valuable site for monitoring the Red Sea, said Eleonora Ardemagni, an analyst at the Italian Institute for International Political Studies. The region has seen a rise in attacks and incidents.

The expeditionary Quds Force of Iran’s paramilitary Revolutionary Guard was said to run a similar operation on a cargo ship long stationed nearby off Yemen before being apparently targeted by an Israeli attack.

Mayun, also known as Perim Island, sits some 3.5 kilometers (2 miles) off the southwestern edge of Yemen. World powers have recognized the island’s strategic location for hundreds of years, especially with the opening of the Suez Canal linking the Mediterranean and Red Seas.

The British kept the island up until their departure from Yemen in 1967. The Soviet Union, allied with South Yemen’s Marxist government, upgraded Mayun’s naval facilities but used them ‘only infrequently,’ according a 1981 CIA analysis. That’s likely due to needing to bring water and supplies onto the island. That will affect the new air base as well as Mayun has no modern port, said Binnie, the Janes analyst.

The base still may interest American forces, however. U.S. troops operated from Yemen’s al-Anad Air Base running a campaign of drone strikes targeting al-Qaida in the Arabian Peninsula until the Houthi advance forced them to withdraw in 2015. The Defense Department later acknowledged on-the-ground American troops supported the Saudi-led coalition around Mukalla in 2016. Special forces raids and drones also have targeted the country.

The U.S. military’s Central Command did not respond to a request for comment. The CIA declined to comment.