Home » World News » Scottish country house that used to be a prison on sale for £2.6m

Scottish country house that used to be a prison on sale for £2.6m

It’s a steal! Victorian country mansion that used to be a jail housing 85 prisoners goes up for sale for £2.6million

A Victorian country manor that used to be a prison for 85 inmates has been put on the market as a luxury home for £2.6million.

Penninghame House near Newton Stewart in Dumfries, Scotland, was run by the Prison Service for 50 years until it was forced to close due to budget cuts.

The open prison had sprawling grounds where convicts ran their own garden centre and sold local produce.

It shut its doors in 2000 when entrepreneurs Ray and Marie Butler bought it and began an extensive five-year restoration project.

They turned into an exclusive health retreat but have now decided to sell it as a residential property complete with 100 acres of land.

With renovations complete Penninghame House now boasts 13 bedrooms and 10 bathrooms, with the gym, sauna and spa still free to use downstairs. 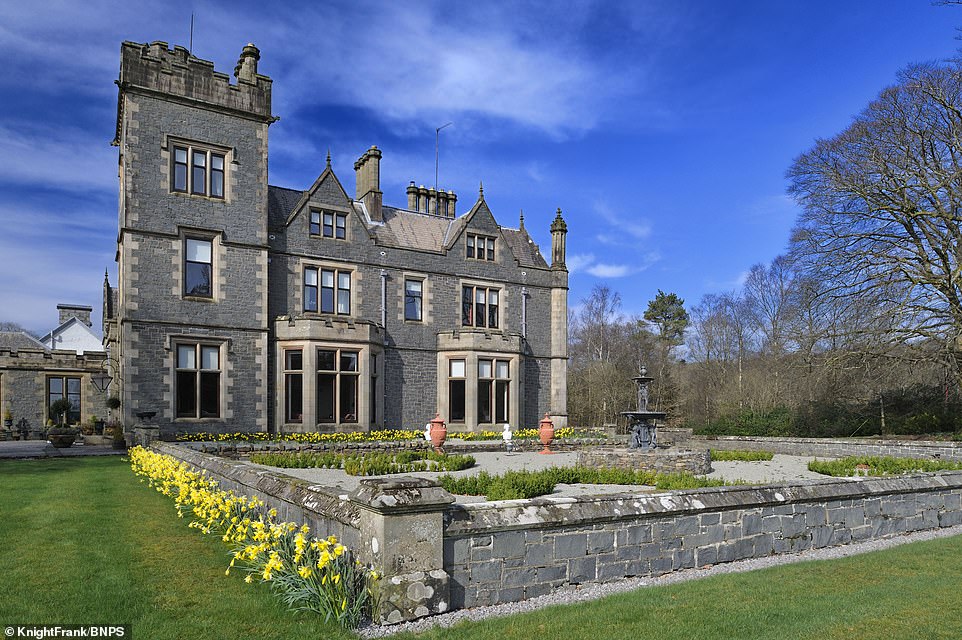 What a steal! Penninghame House near Newton Stewart in Dumfries, Scotland, was owned by the Prison Service for 50 years 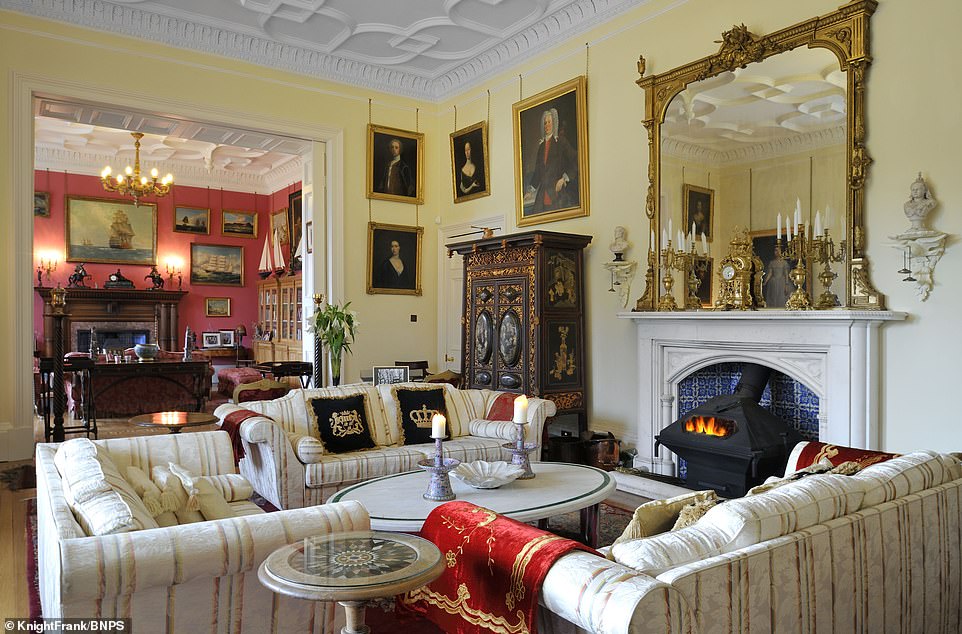 The Victorian country house was bought by entrepreneurs Ray and Marie Butler after the prison sold it in 2000. They turned it into a health retreat but have now decided to sell it as a residential property. Pictured: An open plan living and dining area 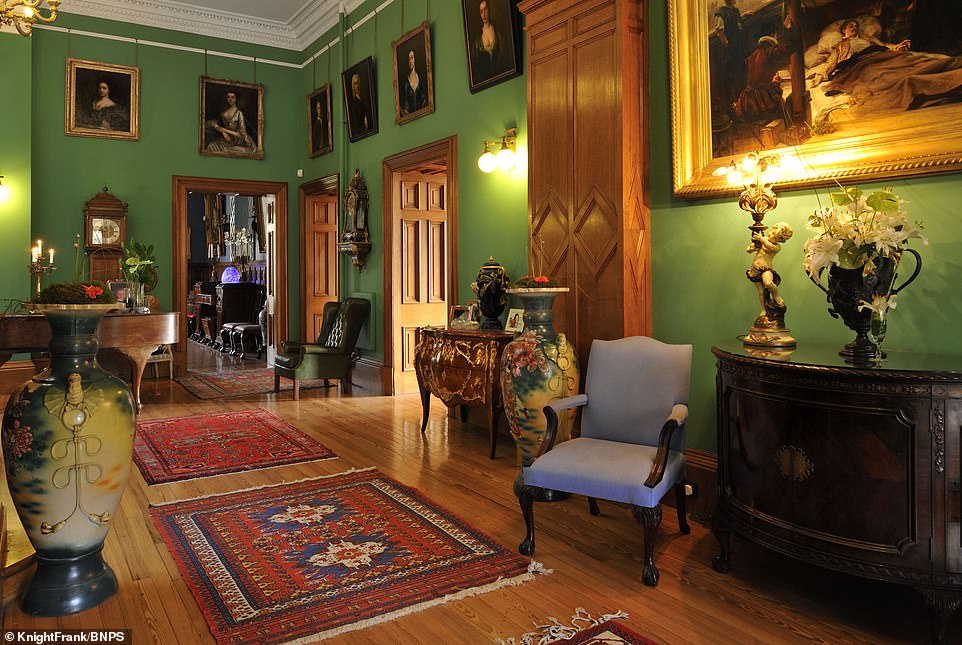 It took the Butlers five years to restore the country manor. It is now decorated with Victorian portraits and antique art 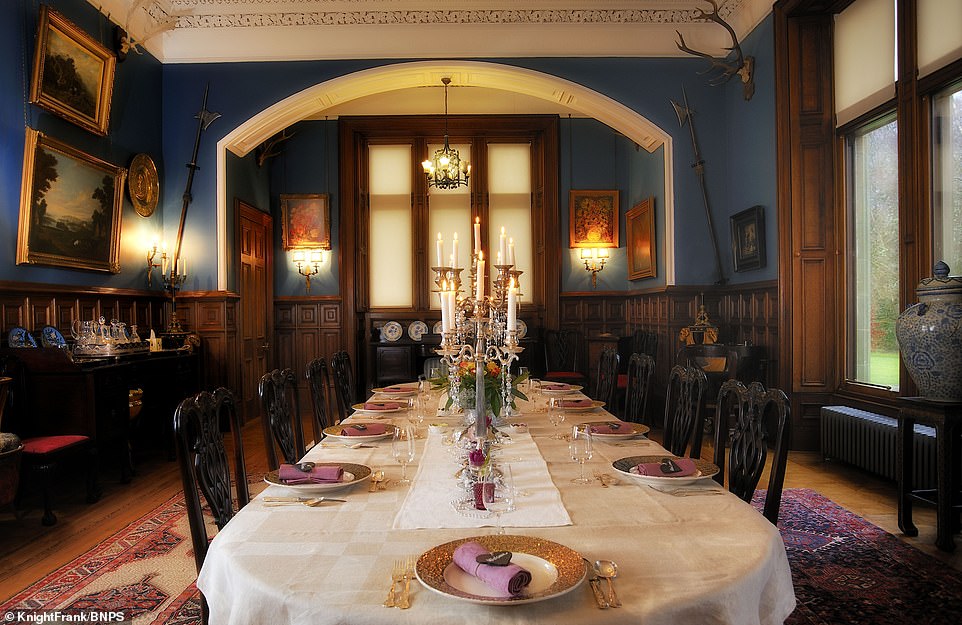 The dining room at Penninghame House is rich with period features. Painted in dark blue, the gold frames of the art on the walls stand out, along with the stag heads mounted on the wall

There are five out houses on the site, as well as a stable block. The main house’s striking Victorian facade was built in 1869 with the office building and dining room dating to as early as 1700.

The property is set within 100 acres of picturesque parkland and pheasant-laden woods and the River Cree runs next to it.

It was also used as a hospital during World War One before being returned to use as a private home.

A spokesman for Estate Agents Knight Frank said: ‘The imposing mansion house was built in 1869 with the office building and Gustavian dining room being much older, probably around 1700. That section of the building would have been the original main house. 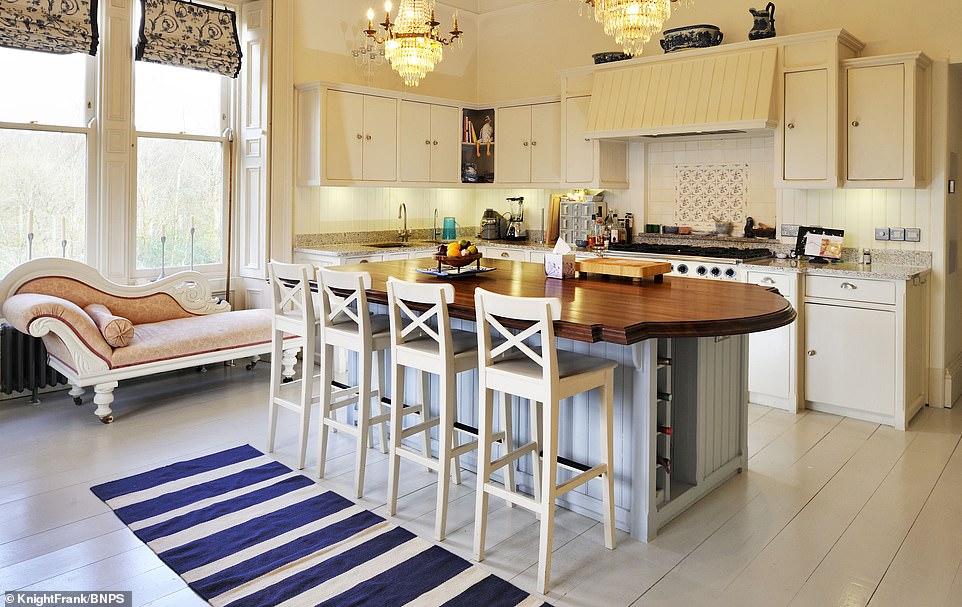 The kitchen at Penninghame House has a more modern feel with light coloured cabinets, surfaces and wood flooring. There is still a nod to the house’s Victorian past, however, with a chez longue tucked away by the large window 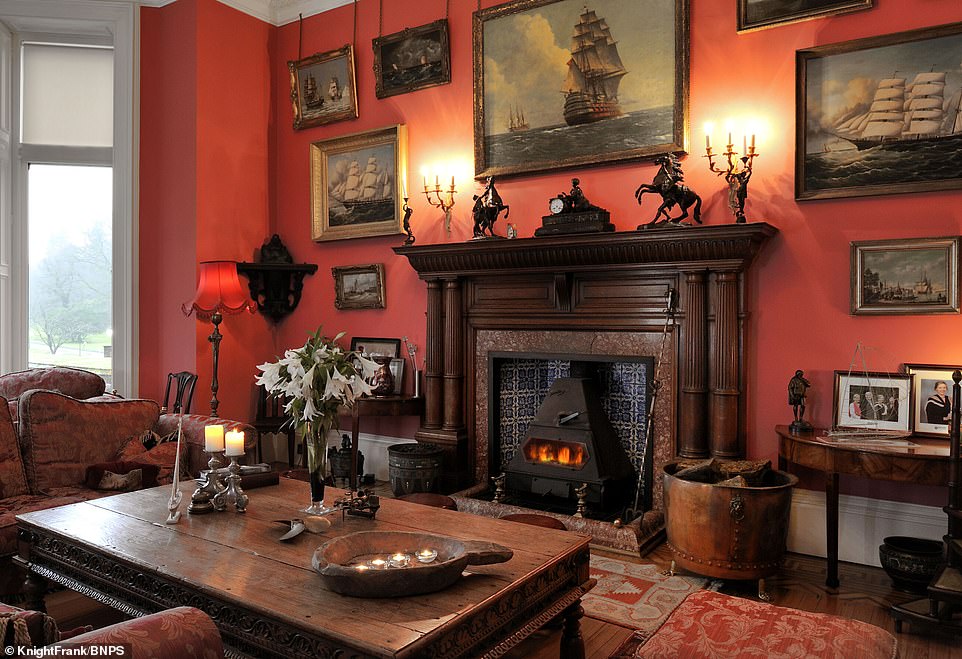 A fireplace roars in one of the mainly living spaces inside Penninghame House, which is surrounded by 100 acres of land 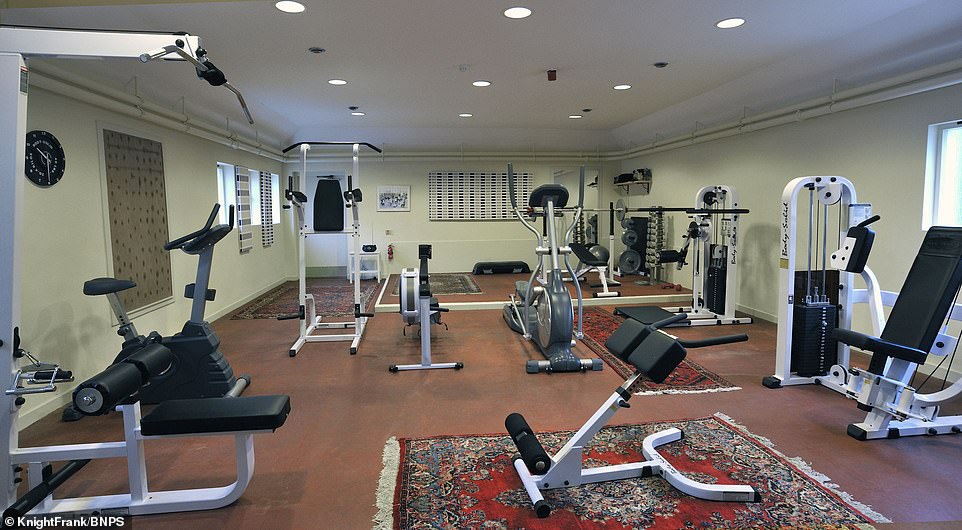 Ray and Marie Butler originally turned it into a health retreat but are now selling the property with estate agent Knight Frank. It means there is still a gym downstairs complete with state-of-the-art equipment 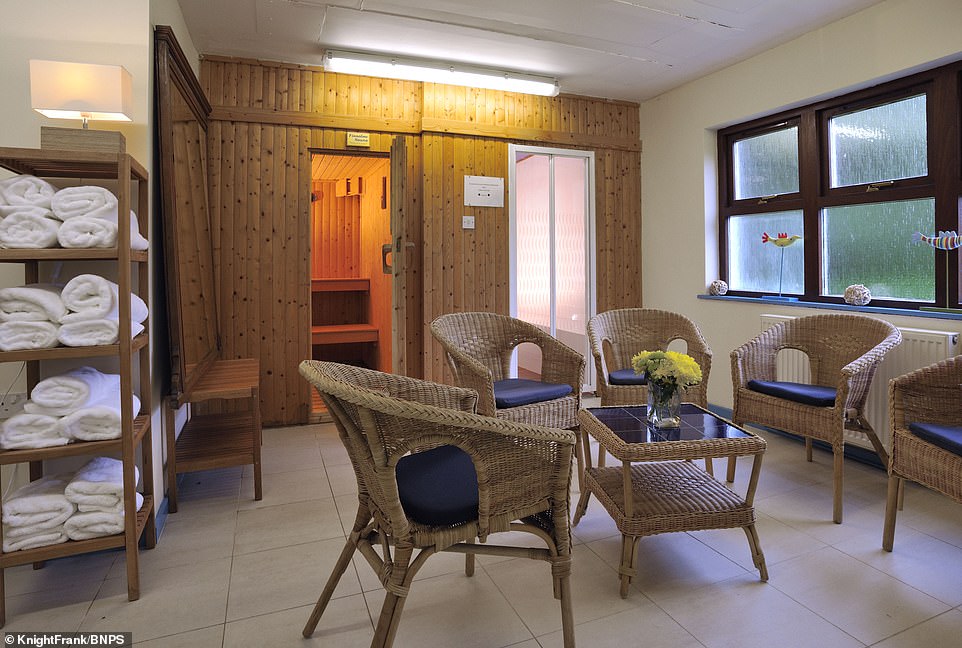 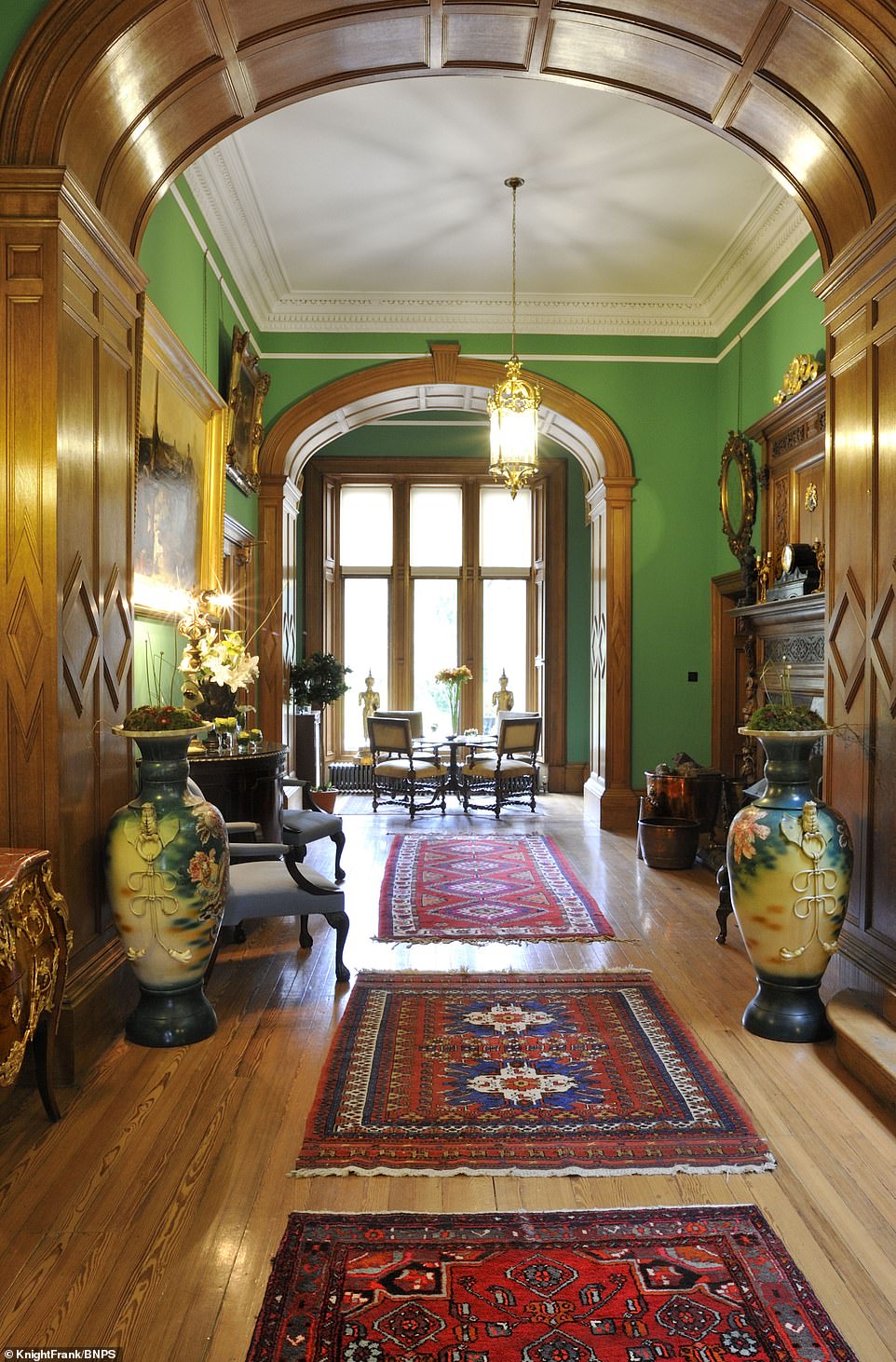 A Knight Frank spokesman said of the house: ‘The imposing mansion house was built in 1869 with the office building and Gustavian dining room being much older, probably around 1700. That section of the building would have been the original main house.’

‘The current owners purchased Penninghame in 2000 and undertook a five year programme of renovating the main house and estate buildings to the standard they are now.

‘The estate extends to around 100 acres, consisting of parkland, woodland and a large walled garden.

‘The River Cree runs past the house, adding to the enchanting beauty of the natural surroundings and the comfort, peace and tranquillity of the estate.

‘The gardens and grounds are a particularly fine feature at Penninghame including sweeping lawns bordered by a variety of specimen trees.

‘This part of Scotland is well known for its mild climate and a varied landscape of attractive coastline with beautiful beaches, to rich farmland and extensive forests.’ 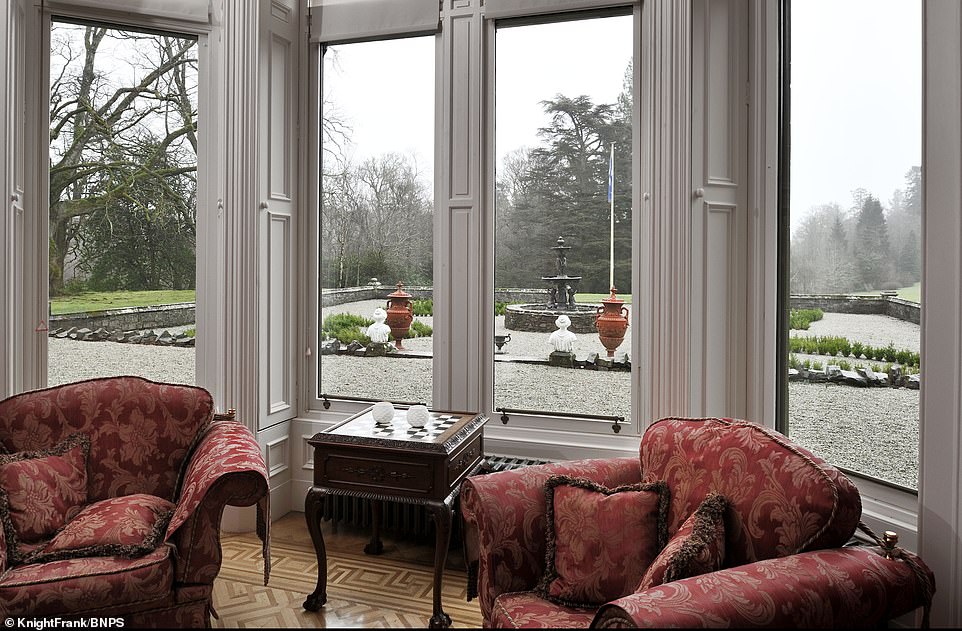 Large windows look out onto the sprawling grounds of the former prison near Newton Stewart, Dumfries, Scotland 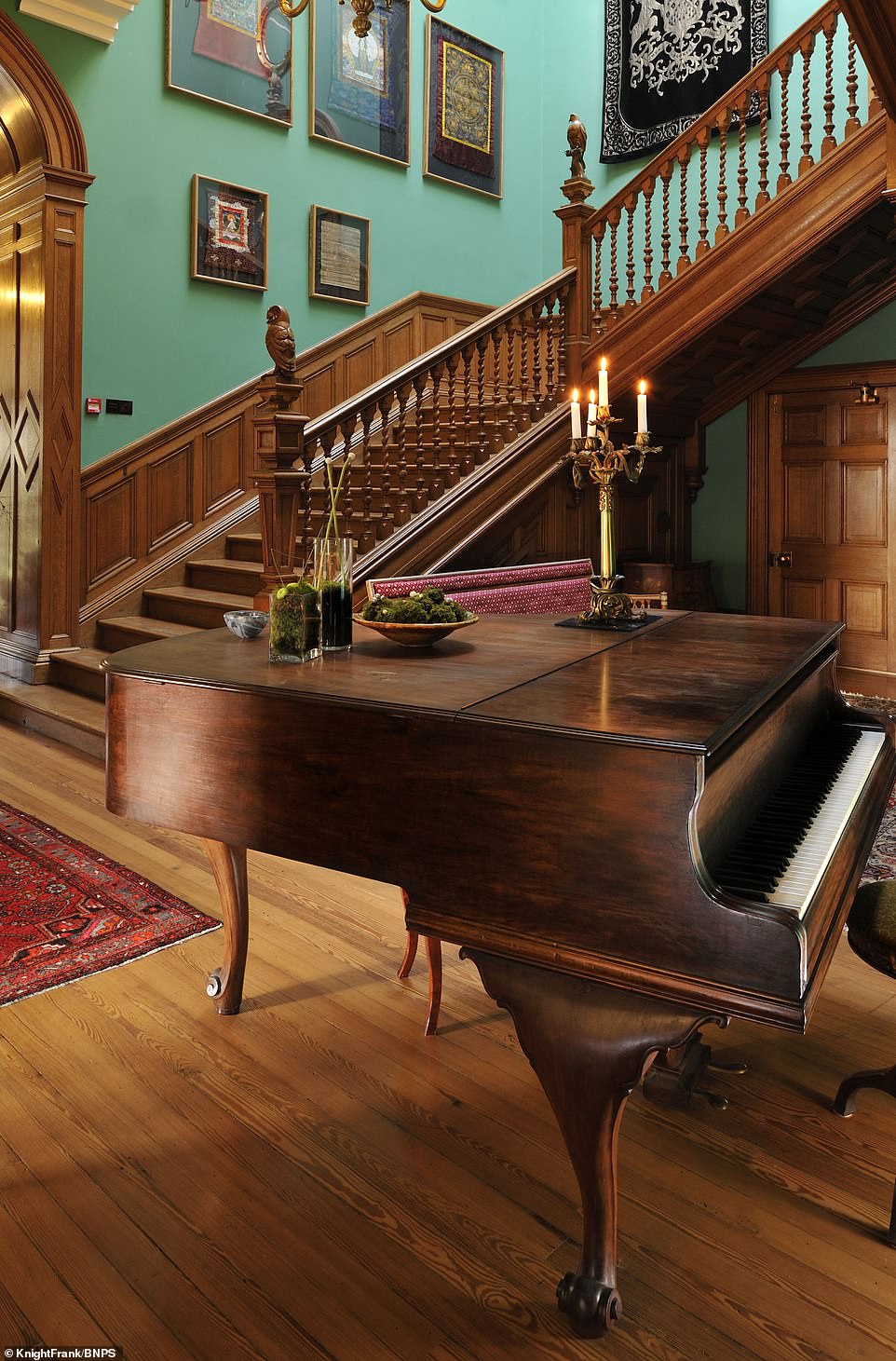 A stunning period staircase is pictured with a luxurious grand piano at the foot of it, matching period wooden floors 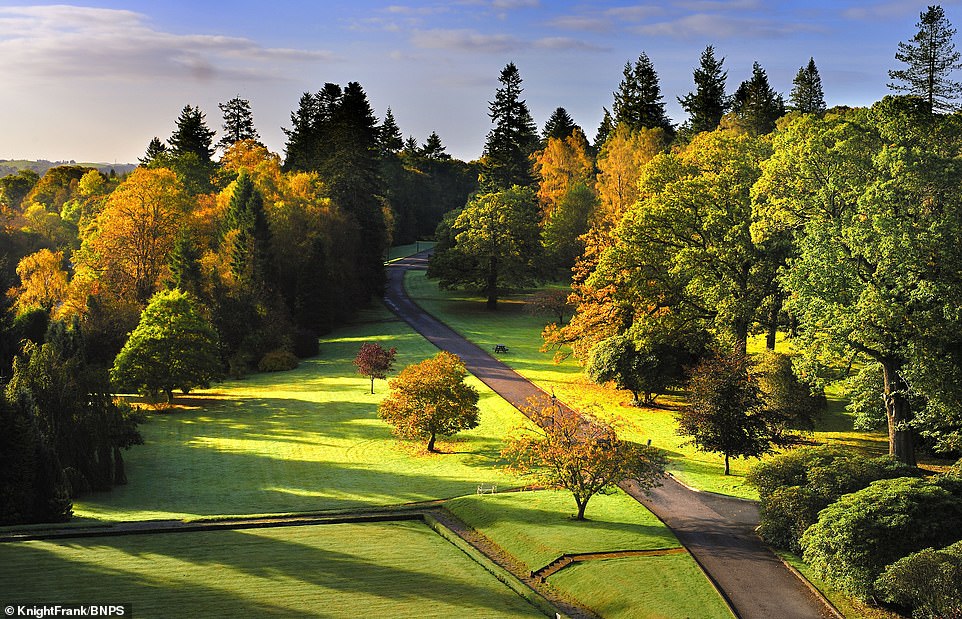 Estate agents Knight Frank said of the grounds: ‘The gardens and grounds are a particularly fine feature at Penninghame including sweeping lawns bordered by a variety of specimen trees.’