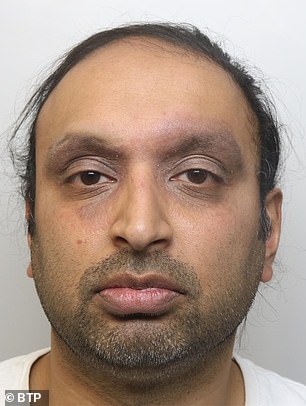 Tajinder Sabherwal, 40, from Bedford was jailed for 18 months after he was convicted of seven counts of outraging public decency and one count of assault against an emergency service worker between 2016 and 2021

A man who exposed himself to women – including off duty police officers – over a five year period and changed his outfits to avoid detection has been jailed for 18 months.

British Transport Police arrested Tajinder Sabherwal, 40, from Bedford on April 3, 2021, after he was spotted exposing his genitals and touching himself inappropriately while sitting across from a woman on a train travelling from London Bridge to Cambridge.

After the woman challenged Sabherwal, an off-duty police officer removed the suspect from the train and arrested him at St Pancras station.

British Transport Police were able to link Saberhwal to an incident when an off-duty police officer boarded a train from Redhill to London Bridge on January 30, 2021.

Saberhwal, spotting the woman, moved across the aisle from her and began touching inside his shorts.

Inner London Crown Court heard that the officer challenged Saberhewal, who pushed past her violently when the train arrived at Coulsdon South and ran out of the station.

He was found guilty of seven counts of outraging public decency and one count of assault against an emergency service worker. The offences dated between 2016 and 2021 on trains around London and Surrey.

As well as the 18-month jail sentence, Sabherwal was handed a Sexual Harm Prevention Order.

Officers examining CCTV footage of the journeys discovered that Saberhwal routinely changed outfits after offending to avoid detection. When he was eventually arrested, he was found carrying several of his disguises which were linked to previous offences.

Sabherwal, pictured, was wearing this outfit when he exposed himself to one victim while on a train from Redhill to London Bridge

‘These incidents will have had a serious impact on the victims’ lives, and we believe no one should be subject to such vile behaviour on the railway.

‘I’m pleased to see he’ll have plenty of time to reflect on this in prison.

‘I would urge anyone who witnesses or experiences sexual harassment on the railway to report it to us – no report is too small or insignificant and we will always take you seriously.