Setka demands construction workers be allowed to return to their jobs

Victorian construction union boss John Setka has demanded Premier Daniel Andrews immediately allow all the state's construction workers return to their jobs after the industry was curtailed by the coronavirus lockdown.

Mr Setka, the state secretary of the construction division of the Construction, Forestry, Maritime, Mining and Energy Union, wrote to Mr Andrews on Friday as suggestions swirl Victoria's strict stage four lockdown could be extended this weekend. 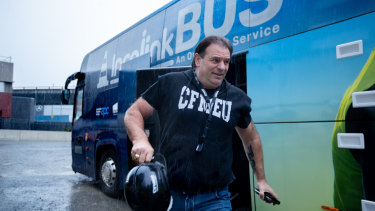 The union boss is a controversial figure in the labour movement and no longer a member of the Australian Labor Party but has thrown his still-substantial influence behind an immediate reopening of construction.

"As the backbone of this country, the 300,000 plus Victorian construction workers across all sectors must go back to work now," Mr Setka wrote in the public letter.

He cited low number of infections on building sites and the industry's steps to limit the spread of the virus, including temperature checks and tests for workers in his argument it was safe to have more labourers on construction sites.

"The on-site COVID-19 safety measures will continue to be an absolute priority, in the provision of protection for the construction industry and the community at large," Mr Setka wrote.

Commercial construction in Melbourne was restricted to ‘pilot light’ operations in early August as infections in Victoria surged, with only a quarter of the normal workforce allowed on site. Workers were initially told to work on only one site to stop potential infections spreading between jobs but the government relaxed that requirement after industry lobbying.

The CFMMEU and its traditional opponent, the Master Builders Association Victoria, have joined forces repeatedly during the pandemic to call for more support and oppose some restrictions on the construction industry.

Master Builders Victorian chief executive Rebecca Casson did not endorse Mr Setka's latest call, but echoed his belief in the industry's performance on COVID-19 safety and said her organisation had been working with businesses, unions and the government on the path out of restrictions.

"We are confident that it can meet all requirements of whatever is announced in the roadmap on Sunday," Ms Casson said in a statement.

Mr Setka did not specify if he would accept a cap on work levels somewhere between a full re-opening and the current position.

Mr Andrews said he was aware of the letter but had not yet read it and would make an announcement about industry restrictions on Sunday.

He said arguments of having relatively few or no COVID-19 cases reflected only the figures "that we know of" and said opening one industry would send a message others were safe, increasing the number of people moving around in Melbourne, helping the virus spread.

"We are listening, we hear you, but the notion of being open for just a couple of weeks that's not a decision I'm going to make," Mr Andrews said.