‘It looked like dystopia’: San Francisco tech executive describes ‘terrifying’ trip to downtown bar where ‘hundreds’ of homeless people and ‘drug addicts’ were ‘folded over’ on sidewalk outside boarded up businesses

A San Francisco tech executive has branded the downtown area ‘dystopian’ after she walked past ‘hundreds’ of homeless people.

Michelle Tandler, 37, shared a picture from her Saturday night trip to a bar in the wilting Democrat-run city.

She posted the image of a distressing scene that featured a group of homeless men surrounding by trash and graffiti.

It comes as cities such as San Francisco, Portland and Philadelphia are being outed for their homeless and drug crisis. 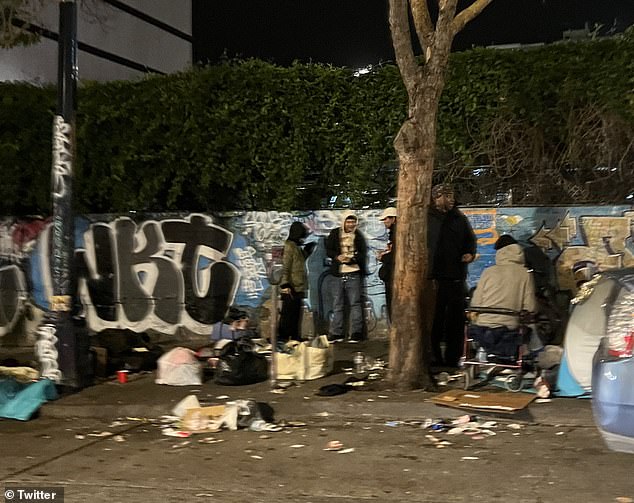 The picture of downtown San Francisco shared by Michelle Tandler on Sunday morning. She said because of the scene of drug-addled homeless people around her, she felt unsafe 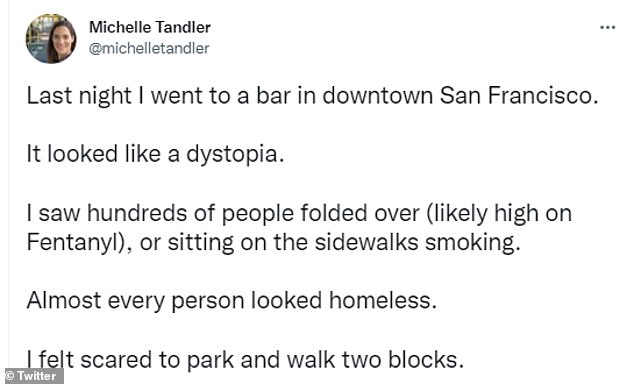 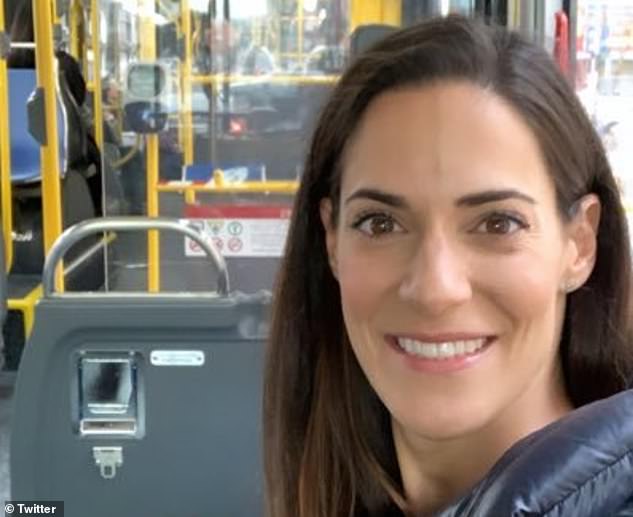 ‘Last night I went to a bar in downtown San Francisco. It looked like a dystopia,’ wrote Tandler.

‘I saw hundreds of people folded over (likely high on Fentanyl), or sitting on the sidewalks smoking.

‘Almost every person looked homeless. I felt scared to park and walk two blocks,’ she wrote before launching into a nearly two-dozen tweet thread about the ruinous state of San Francisco.

Tandler claims that San Francisco is at a breaking point as it pertains to the ongoing and rampant homelessness problem, as well as drug use in the streets and lax criminal prosecution policies fostered by progressive politicians and city officials.

‘Businesses are shutting down and leaving,’ she wrote. ‘The homeless, rightfully so or not, have taken over downtown SF.’

‘The status quo is unsustainable,’ she declared. Last week, Collier Gwin – the man who was filmed spraying down a homeless woman who refused to move away from his gallery front – was arrested.

The city’s district attorney said he would face charges for the incident that occurred on January 9 in front of the Foster Gwin gallery.

The incident prompted an initial public outcry, but some SF residents – Tandler among them – took a more nuanced view of the unfortunate interaction.

‘Recently a man in San Francisco was arrested for spraying a homeless woman with water,’ she wrote.

‘She had been camping in front of his shop for weeks, screaming, defecating, scattering trash. He lost his patience and engaged in a cruel act.’

Tandler went on to question who should have taken responsibility for the woman who was an issue for the man and his client-facing business.

‘He had been allowing her to camp under his awning for weeks. But she clearly needed more,’ wrote Tandler. ‘Where was SF government? California? The Federal government?’

‘Who owns the sidewalk?….Should she be allowed to camp, and block passage into his store?

‘Was he defending his property? Is that allowed?’ she continued.

Tandler added that she, along with many others, is in search of a humanitarian option, but does not believe the city’s homeless population should be given a free pass to camp on the streets, effectively taking over parts of the city. 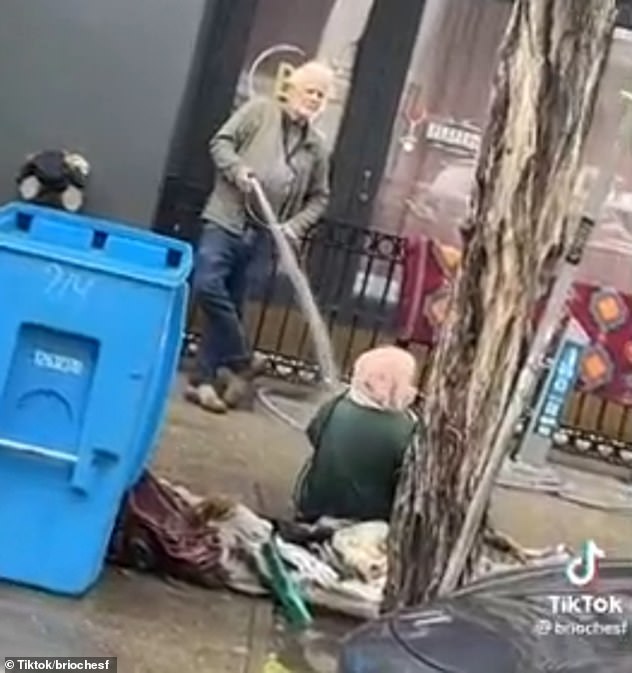 A business owner who went viral after he was filmed spraying down a homeless woman with a hose in front of his San Francisco store was arrested for battery, hours after the city’s DA said he would face charges for the widely seen incident 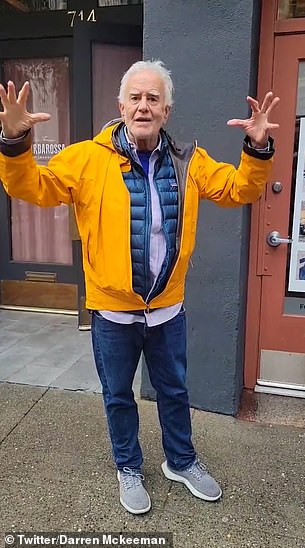 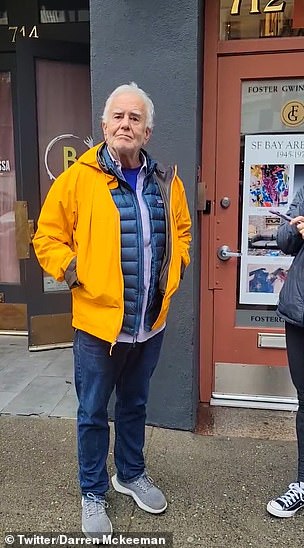 Pictured: Collier Gwin, who runs Foster Gwin Gallery in the Financial District. He was arrested last week at his gallery after the city’s DA issued a warrant for his arrest 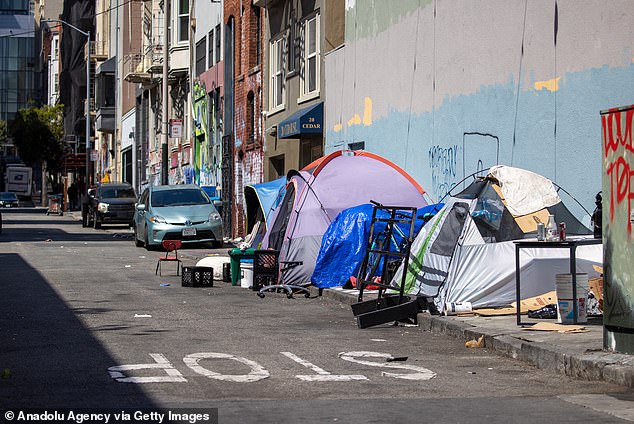 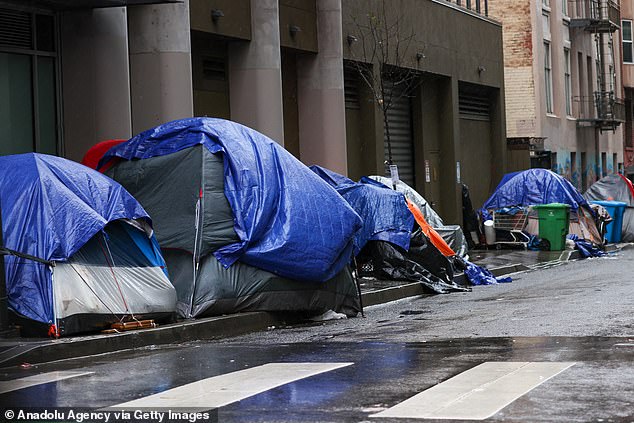 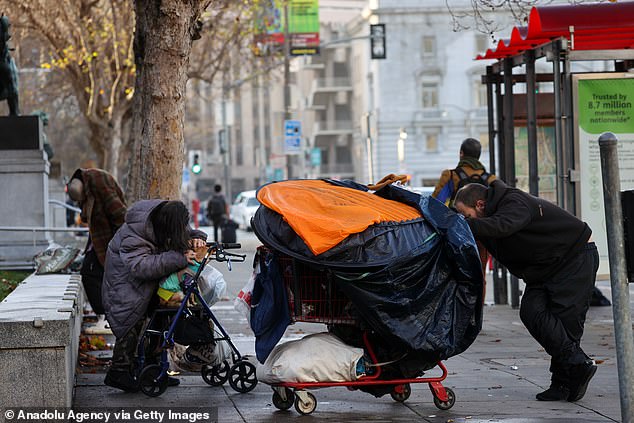 Homeless men are seen on a sidewalk near San Francisco’s City Hall, where legislators dream up increasingly relaxed policies that fail to protect any part of the city’s vulnerable population 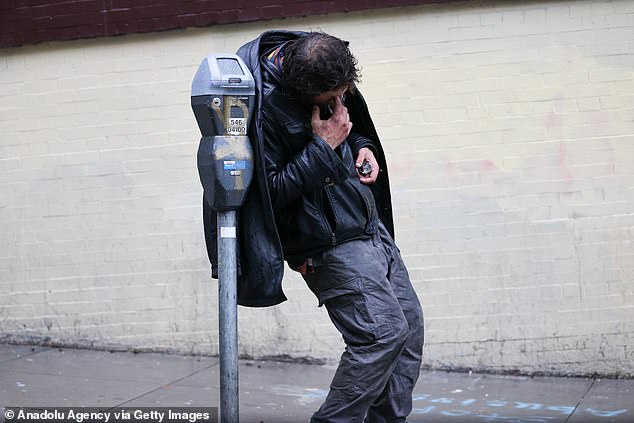 She wrote that she believes the city may be on the precipice of ‘vigilantism.’

‘When home values fall people will follow their natural urge to protect their families and net worth…this anarcho-tyranny needs to come to an end,’ she wrote.

She also hit out against the so-called ‘harm reduction’ policies in the city that allow homeless and others to publicly access syringes and shoot up at injection sites.

The number of homeless people in San Francisco was tallied in February of last year at almost 8,000, the second highest figure of any year since 2005, according to the official government count which takes place every three years.

It has almost certainly ballooned since the latest count.

Business owners in some of San Francisco’s neighborhoods have threatened to stop paying taxes if politicians don’t start cleaning up streets of litter and stopping people from openly taking drugs. 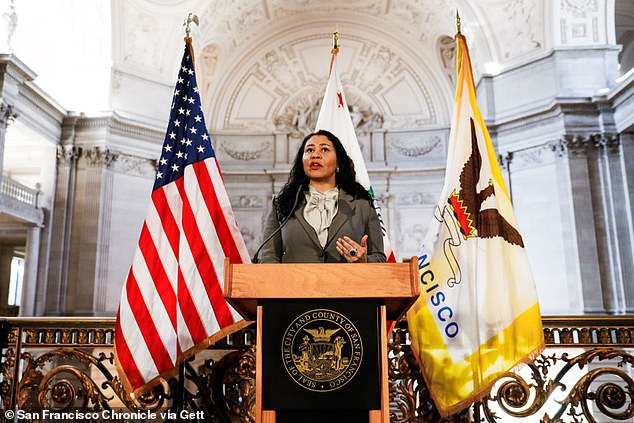 In a letter to city officials from last summer, The Castro Merchants Association said some of the homeless people in the streets outside their stores had been harassing customers and needed help.

‘They need shelter and/or services and they need them immediately,’ the Merchants Association said.

‘Our community is struggling to recover from lost business revenue, from burglaries and never-ending vandalism/graffiti (often committed by unhoused persons) and we implore you to take action.’

Major crimes in San Francisco are up 7.4 percent so far last year from the same period in 2021, with assault up 11.1 percent and robbery up 5.2 percent.

A recent poll found that a majority of San Franciscans believe their city is going down hill, and a third plan to leave the city within three years.

Some residents blame Mayor London Breed, whose earlier popularity for steering the city through the pandemic appears to have waned amid rising crime, the fentanyl epidemic and other woes.