Home » World News » 'Shark attack' off the coast of Cornwall: Woman is bitten on leg

'Shark attack' off the coast of Cornwall: Woman is bitten on leg

Shark attack off the coast of Cornwall: Woman is bitten on leg near Penzance harbour while on snorkelling trip to see blue sharks – the first time it has happened in British waters since 1847

A snorkeler believed to have been bitten by a shark off Cornwall has been left with a leg injury, Coastguard have said.

The female swimmer is said to have been on a snorkelling trip to see blue sharks in Penzance harbour.

She was bitten on Thursday in what is potentially the first shark attack on a person in British waters since 1847.

The woman was rescued by the coastguard and left in the care of paramedics. HM Coastguard has confirmed that it is believed the injury was caused by a suspected shark bite. 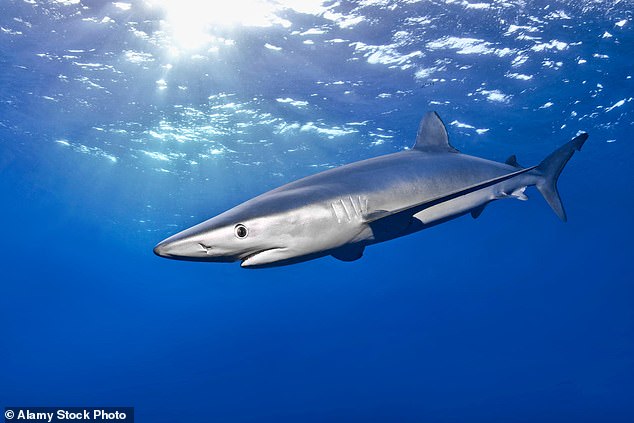 The female swimmer is said to have been on a snorkelling trip to see blue sharks in Penzance harbour. Pictured: Blue shark stock image

Blue sharks are fearsome predators which return to the UK coastline seasonally to feed on the abundant stocks of mackerel and other fish in British waters.

Adult males can reach lengths of almost 3 metres (10 feet), while females can grow even larger, growing an extra foot in length. Earlier this year fishermen caught a huge 9ft 2in shark off the Welsh coast.

The predators are one of the widest ranging species, feeding in waters from Norway to Soutch Africa.

Despite their fearsome appearance, these sharks are under threat.

‘The coastguard was notified just before 12.30pm on Thursday (July 28). It is believed the swimmer suffered a leg injury.

‘The coastguard team met the casualty at Penzance harbour to assist with passing them into the care of the ambulance service.’

However, the agency did not give any more details on the age of the victim, type of shark or their current condition.

Several species visit the Cornish waters every year, including blue sharks, porbeagle sharks and basking sharks – who do not tend to attack humans – but shark attacks remain rare, especially in the UK.

‘In August 2012 a beach in Ceredigion, Wales was closed to bathers due to the presence of a blue shark.

‘The shark was spotted swimming in between boats and came very close to the shore, swimming past tourists in just a few feet of water.

‘Later in the same month another beach in West Dorset had to be closed for an hour and a half due to another blue shark.’

In 2017 surfer Rich Thomson was also apparently bitten on the thumb by a smooth hound – a relative of sharks.

The last recorded unprovoked ‘attack’ was at Felixstowe when a windsurfer’s board was bitten by a shark in 2016.

Despite this, the windsufer sustained no injures and shark bites tend to only happen when provoked during fishing or other activities.