Baker: There’s a ‘very strong case to be made’ for Trump to resign

Wall Street Journal editor at large Gerry Baker discusses the possible fallout in the unlikely event President Trump resigned in the next week.<br>

A QAnon activist and Trump supporter who stormed the U.S. Capitol shirtless in a horned bearskin headdress is refusing to eat in prison unless he is given organic food, his mother said Monday, echoing the complaints of the man’s public defender.

Gerald Williams, the attorney for Jacob Anthony Chansley, who goes by Jake Angeli, told the court during a virtual hearing that his client had not eaten since he turned himself over to the FBI on Saturday because he has restrictive dietary needs. 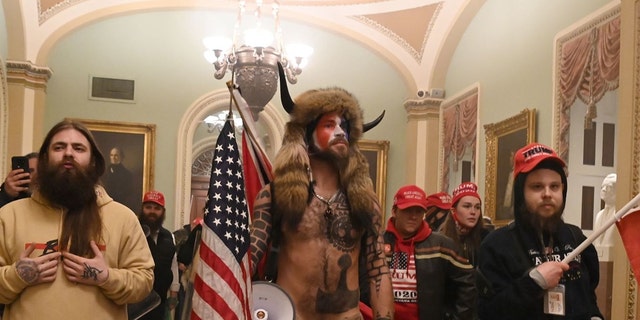 Supporters of President Trump, including QAnon backer Jake Angeli, aka Yellowstone Wolf (C), enter the US Capitol on January 6, 2021, in Washington, D.C. (Photo by SAUL LOEB/AFP via Getty Images)

“He gets very sick if he doesn’t eat organic food,” Martha Chansley, Angeli’s mother, told reporters outside the courthouse. “He needs to eat.”

The court said the U.S. Marshal’s office would need to make accommodations for Angeli, adding that it is imperative that he eat.

The U.S. Marshal for Phoenix, David Gonzalez, told The Arizona Republic on Monday that the Marshals Service would comply. “For religious or health reasons, if (inmates) need a special diet, we are required to accommodate them,” he said.

Angeli was charged with knowingly breaking into the Capitol building and its grounds, along with violent entry and disorderly conduct after photos circulated on the Internet that authorities said showed him holding a spear inside the building after a violent siege ignited by pro-Trump supporters backing the president’s false claims of election fraud.

Angeli became known in right-wing circles for protesting in Phoenix in his wild costume, telling the Arizona Republic in a 2020 interview that he is a QAnon supporter.

The activist told the FBI that he came to D.C. with other “patriots” from Arizona at the “request of the president” to protest the certification of the Electoral College results by Congress.