Shoppers have slammed supermarkets and accused them of ‘ruining Christmas’ as their deliveries are cancelled at short notice and their Christmas dinner essentials are substituted.

One woman shared a photo of a singular brussels sprout from Sainsbury’s with amounted to four pence.

She said: ‘Absolutely winning at life with my Christmas food shop this year!’ 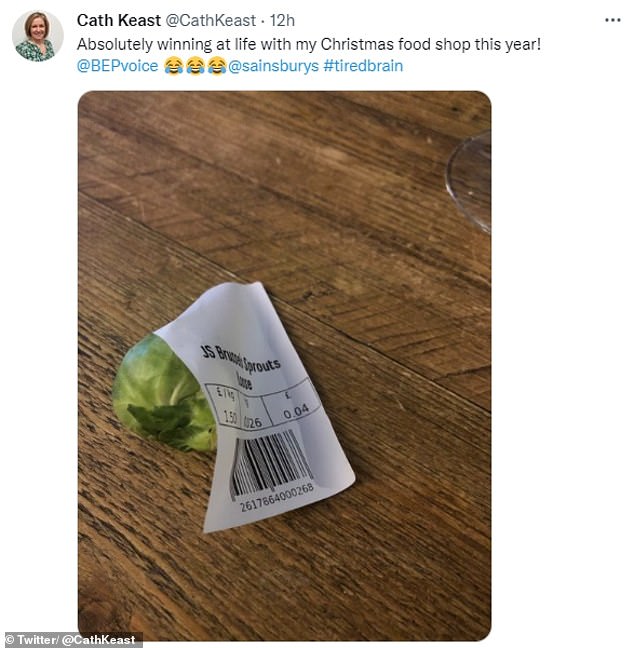 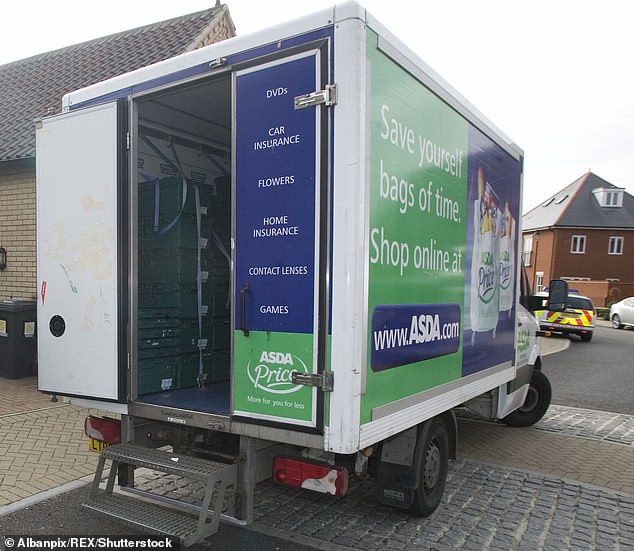 Another shopper tagged Asda and shared a screenshot of his order which showed they had substituted a sage and onion stuffing mix for a tuna pasta bake mix.

He said: ‘Online shopping is absolutely shocking, this is just two out of nearly half of our shopping. Substituted stuffing mix for tuna pasta bake??? White bread for wholemeal bread?? Ur telling me u have no stuffing in asda or no white bread?? What a joke.’

One Asda customer claimed she had booked and paid for a Christmas delivery slot in October and was ‘furious’ to have had it cancelled by the supermarket giant.

She said: ‘Absolutely furious to wake up to my @asda food shop delivery to be cancelled! The slot was booked and paid for in October! and urgently needed it for nappies this morning but also now have to cancel todays plans to go to the shops to buy the Christmas food shop! Not even a call.’

A Tesco shopper had ordered parnsips, potatoes and Christmas snacks to be sent an email from the company saying that the products were out of stock and that an ‘appropriate substitution could not be found.’

She shared the screenshot and said: ‘I think I liked the “take your chances” approach to Christmas from the old days. This ordering… then having your hopes dashed… Christmas dinner and no roast potatoes works right???’

In November, Tesco shoppers scrambled for a Christmas delivery slot, with more than 300,000 customers flooding the website, which caused technical issues.

The supermarket is also due to axe its remaining butchers and fishmongers in 279 stores as shoppers are opting for pre-packed items. 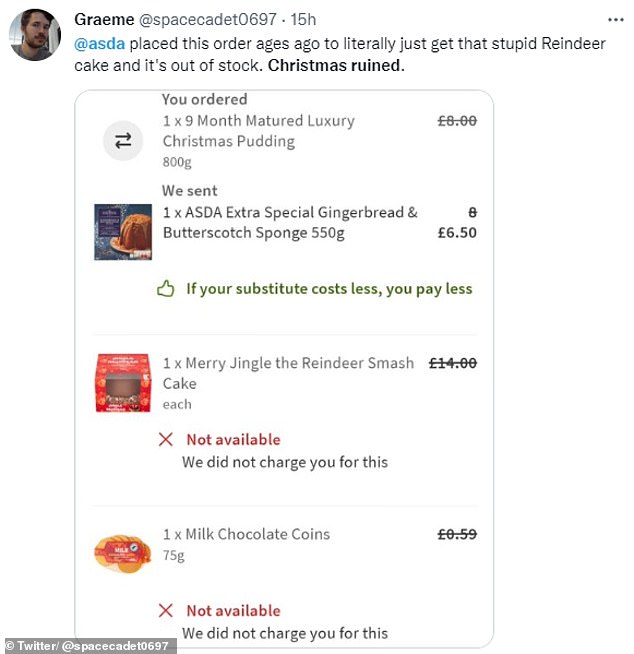 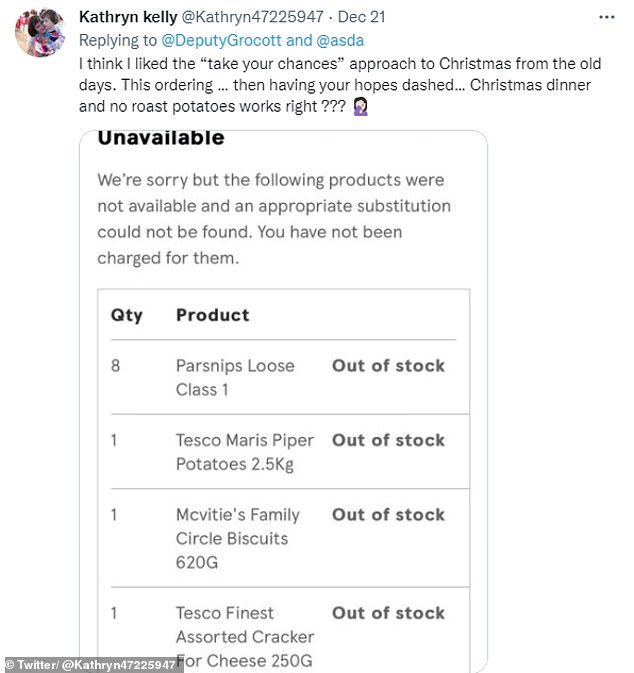 An Asda shopper said: ‘Asda has definitely failed tonight… no bacon, wine, lemons, prawns, gravy… foil, parsnips or cranberry sauce. What was the flippin point of pre-ordering everything weeks ago?! #fail’

One woman claimed Sainsbury’s delivered her meat with a short sell-by date and due to being immobile, she now will not be able to get any meat for her Christmas dinner.

She said: ‘Ruined Christmas thanks to @sainsburys delivering meat that will be out of date and then sending a refund. Although I have no way of getting any meat for xmas dinner now anyway due to being immobile.’

Another Asda customer said: ‘Asda you’re starting to worry me. I’ve  booked a Christmas food delivery for Friday and every time I go to amend the order it says that certain items are out of stock. Please tell me this quite normal and by Friday they will be part of my shopping.’

MailOnline have contacted Asda, Sainsbury’s and Tesco for a comment.