South Korea has its first populist President, a swashbuckler ready to take on Beijing

Seoul: There’s a political novice who wants to overhaul the establishment, a bitter, personal campaign and millions of frustrated young voters, who believe their lives are going to be worse than their parents’.

The ingredients that helped make Donald Trump president of the United States just made Yoon Suk-yeol the next leader of South Korea. Now East Asia has its first populist president. The result will define Seoul’s relationship with Pyongyang, Beijing, Washington, Tokyo and Canberra. 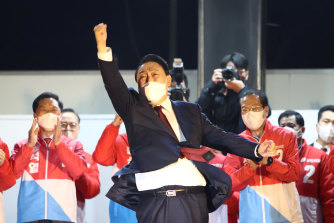 The swashbuckling, big-talking, turtleneck-wearing public prosecutor from Seoul’s upper crust wants to get the government out of South Korean lives, cut taxes and purge what he sees as a corrupt Democratic Party from politics.

Yoon also wants to make South Korea bigger than the North Korean problem that has defined the nation for the entirety of its existence.

To do that, he will challenge the carefully managed relationship with China. South Korea relies on Beijing for its negotiating power with Pyongyang, but even Seoul – which has an existential need for China’s influence over the nuclear-armed North – is growing tired of China’s belligerence. 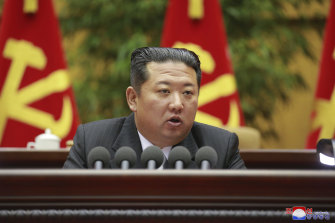 The diplomatically cautious Democratic Party was already moving in this direction under Moon Jae-in, looking to engage with the Quad network on the sidelines and signing a $717 million defence deal with Australia.

South Korean congressman and former Democratic presidential primary candidate Kim Doo-kwan told The Sydney Morning Herald and The Age that it was time for his country to do more on the global stage.

“South Korea is now recognised as a developed nation. We are ranked seventh in global export and sixth in military power,” he said. “Our global influence has risen.”

Yoon wants to take his mandate and South Korean diplomacy deeper into the US’s sphere of influence.

There is a well of gratitude here for the US Army’s role in the Korean War. American flags still fly high at political rallies for both parties, the South largely inherited the American democratic system and the US military remains a significant presence on the peninsula.

But for all of that emotional attachment, South Korea under both the liberal and conservative parties has been reluctant to embrace the security networks and alliances that Washington has built over the past four years to contain a rising China. 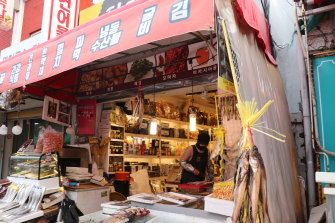 The fish shop in Ssangmun-dong, Seoul, made famous by where Netflix’s Squid Game.Credit:Sean Na

That is about to change.

“South Korea is going to be swinging towards the US-led security network,” said Jae Jok Park, an assistant professor of foreign policy at Hankuk University of Foreign Studies.

Both sides want Korean-Japan relations to improve despite longstanding grievances over the war crimes of Japanese soldiers.

“Now Japan and South Korea under Yoon are very much willing to restore the relationship,” said Park.

That will further integrate Korea into the regional security framework that surrounds China. Australia plays a key role in that network, having weathered $20 billion in trade strikes from Beijing.

“The Yoon government does not think it is urgent to restore relations with North Korea, so Yoon does not need to pander to China,” said Park.

The message rubbed off on Korean voters, who despite their proximity and economic ties to China, have been turned off by Beijing’s aggressive stance.

“I want a president who crystal clearly says what he wants to say to the US and the Western world, and isn’t concerned about any counter reaction from China,” said Cha Kwang-il, a dentist who voted for Yoon on Wednesday.

“The Moon’s administration has been letting China get into its diplomatic decisions. We sure need to be concerned about China, but not to an extent in which we can’t say what we must because of China.”

Hong Jung-hee, a 47-year-old artist from Gangnam said she voted for Yoon because she wanted a strong “man who can power through difficult times”.

“Unlike the US and other Western countries, South Korea so far has been heavily reliant on China,” she said. “I think South Korea needs to be more comprehensive in its diplomatic relations. The US has helped South Korea a lot in history.”

Others are not ready to let go of their country’s more cautious diplomatic past, fearing it could harm them if there is an outbreak of war on the Korean Peninsula.

“Our national security will be at risk if we let a person like Yoon take the highest post,” said Min Kyung-chil, 81, a retired civil servant, who lived through the Korean War.

The Democratic Party’s candidate Lee Jae-myung Lee accused Yoon of fearmongering during the campaign. “It is important to win a war, but it is more important to win without a war and the most important thing is to create [an] environment where there is no need to go to war,” he said.

“If western countries are concerned about global security and war issues, I think they would lean more towards supporting Lee than Yoon for the sake of bringing peace to the world,” she said.

Now Western governments will not have a choice. Yoon and his vision for a strong Korea are here to stay for the next five years.