Squirming minister insists axing 45% tax rate was 'not my idea'

A senior Treasury minister insisted today that the hugely unpopular decision to scrap the 45 per cent tax rate for Britain’s wealthiest people was not his idea as the political blame game kicked off.

Chris Philp, Kwasi Kwarteng’s deputy, was blamed for the idea of axing the top tax rate paid by people earning more than £150,000 in the first place as the Chancellor was forced to reinstate it.

Mr Philp, the Chief Secretary to the Treasury,  faced a gruelling interview with Sky’s Kay Burley, who asked about reports that the policy was introduced by him during Liz Truss’s Tory leadership campaign.

‘I wouldn’t describe it as my idea, no,’ he said, adding: ‘These are broad-based discussions, lots of people are involved, the decisions are taken by the prime minister and the chancellor. I was one of many people involved in those discussions.’

But even after Mr Kwarteng announced he would keep the tax rate for 600,000 rich Britons, Mr Philp insisted there was a ‘strong economic case’ for abolishing it. 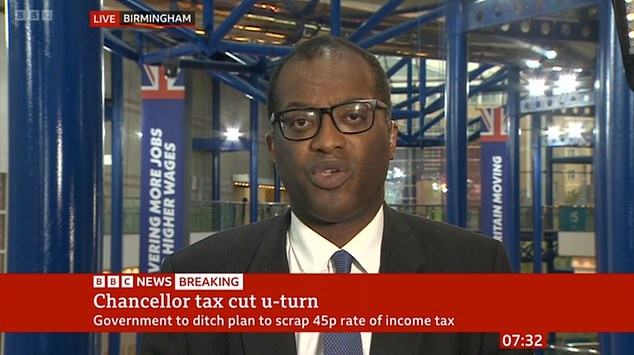 In a round of interviews this morning, Chancellor Kwasi Kwarteng said the row over axing the 45p rate had been ‘drowning out’ the details of a ‘strong package’ 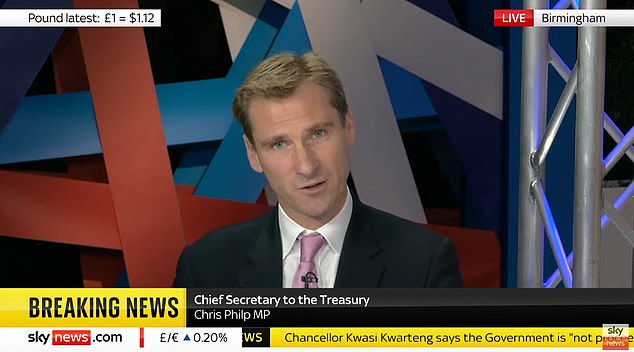 Chris Philp, Kwasi Kwarteng’s deputy, was blamed for the idea of axing the top tax rate paid by people earning more than £150,000 in the first place

He told Sky News it would help the UK’s ‘international competitiveness, but added: ‘It has become very clear over the last few days that the public and parliamentary opinion don’t like the idea for a variety of reasons and so we have responded to that because we are a Government that listens and I think that is a good thing.’

He later told Times Radio there would be no more changes to the economic plans set out by Mr Kwarteng last Friday.

‘The rest of it is all staying… I’ve said yes to all of it,’ he told the broadcaster.

But the former pensions secretary Stephen Crabb told LBC the U-turn ‘probably doesn’t draw a full line under the mini-budget’.

The Prime Minister and Chancellor today executed an extraordinary U-turn on plans to scrap the top rate of tax to head off a massive Tory revolt.

The PM and Chancellor will no longer axe the 45p rate for people earning more than £150,000 a year after it became clear dozens of MPs would refuse to back the move in the Commons.

‘We get it and we have listened,’ Mr Kwarteng posted on Twitter. ‘It is clear that the abolition of the 45p tax rate has become a distraction from our overriding mission to tackle the challenges facing our country.’

In a round of interviews this morning, the Chancellor said the row had been ‘drowning out’ the details of a ‘strong package’ – but repeatedly refused to say it had been a mistake.

Pushed on whether he had a crisis meeting with Ms Truss last night in which she instructed him to change course, Mr Kwarteng said: ‘We have talked constantly about the Budget… with regard to the 45p rate we talked to lots of colleagues we talked to lots of people in the country.’

He refused to say the word ‘sorry’, but said: ‘There is humility and contrition… I am happy to own it.’

Asked if he had considered resigning, Mr Kwarteng told BBC Breakfast: ‘Not at all. What I am looking at is the growth plan.’

He also dodged as he was pressed on whether there could be more U-turns.

The Pound surged nearly a cent against the dollar to $1.12 on the news, although it drifted down again afterwards. That is close to the level it was before the mini-Budget was announced on September 23 – sending it to an all-time low of $1.03.

The huge shift followed Michael Gove and Grant Shapps putting themselves at the head of the rebellion, warning the measure would be a ‘massive distraction’ and politically toxic with ordinary voters.

Only yesterday Ms Truss took to broadcast studios to defend the plan and deny there would be a rethink – although she was also accused of throwing Mr Kwarteng ‘under the bus’ by saying he had made the decision to go ahead.

Chief Secretary Chris Philp was among the other ministers who had spoken enthusiastically about the proposal, insisting he would give the Budget ‘9.5 out of 10’ despite ensuing chaos on the markets.

Mr Shapps had lambasted the idea as ‘politically tin-eared’ while sources claimed Ms Truss ‘could be gone by Christmas’ unless she backed down to ‘livid’ MPs.

Ms Truss tweeted this morning: ‘The abolition of the 45pc rate had become a distraction from our mission to get Britain moving.

‘Our focus now is on building a high growth economy that funds world-class public services, boosts wages, and creates opportunities across the country.’

‘And I think you know the idea that you could whip everybody into line or delay this until next spring and change the outcomes, which was one of the suggestions, a couple of the suggestions yesterday, completely untrue. This could never have worked.’

A U-turn on the policy is being viewed as the price of shoring up Tory support for the rest of the mini-Budget measures.