This is the shocking moment three men took their ponies for a dip in the Serpentine lido in central London – forcing children to wait at the sidelines.

An angry mother was forced to intervene to demand the men get their animals out of Hyde Park’s central lake.

Police officers were called at 4.36pm on Saturday to reports of ponies in the popular swimming spot.

Footage taken by an onlooker showed a mother squaring up to a group of men as the horses cooled off. 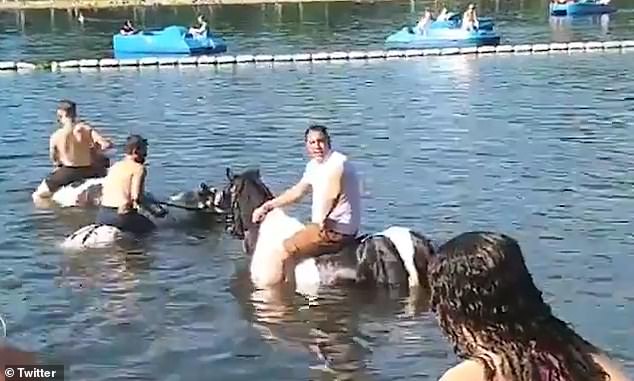 Children could be seen in the footage waiting on the sidelines while the horses enjoyed a quick dip.

Comments underneath a social media post sharing the video suggest the ponies may have been cooled off before racing along the embankment cycle lane.

Police revealed no arrests were made, adding: ‘Police were called around 16:36 hrs on Saturday, 5 June to reports of horses in the Serpentine, Hyde Park.

‘Officers attended and advised the horse riders that it was an offence to have animals in the Serpentine. They got out of the water and left the area.’

at, Mo, Serpentine:, standoff, the
Celebrities