Storm Brendan is set to cause devastation across Britain as it continues its path across the country. Earlier today Storm Brendan displayed its immense power as a heavy torrential downpour was caught on video. The 18-second clip shows powerful winds and brutal rainfall pounding a street in Bantry, Ireland. 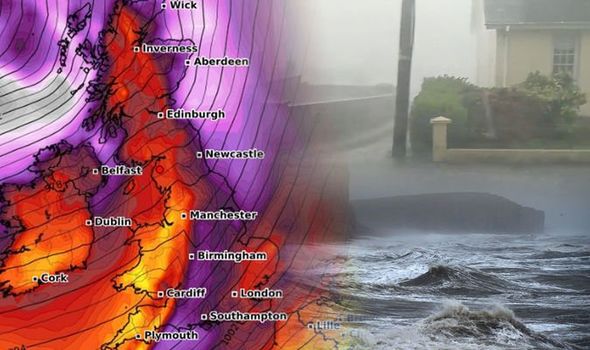 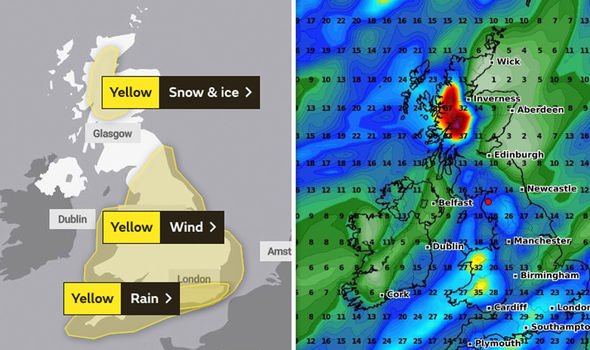 The Met Office has issued multiple severe wind, snow and ice and rain warnings across Britain

Winds are expected to hit highs of 100mph for some parts of the country.

The Met Office said: An area of very strong winds will move eastwards across the UK through Monday, clearing eastwards overnight.

“The strongest winds are expected around exposed coasts and hills.

DON’T MISS: Storm Brendan to be WORSE than brutal Great Storm of 1987

“Here gusts of 60-70 mph are likely, with a few sites perhaps seeing gusts to 80 mph – especially around Irish Sea coasts and around the west coast of Scotland where the strongest winds are most likely.

“Gusts will be lower inland with 45-55 mph likely.

“A narrow band of squally heavy rain moving east, accompanying the strongest winds, may be an additional hazard.”

BBC Weather have warned of the extreme conditions Storm Brendan is expected to bring.

BBC Weather meteorologist Carol Kirkwood said the mid-Atlantic weather system known as Storm Brendan could have winds reach up to 90mph, with heavy showers plaguing large swathes of the UK through Monday. 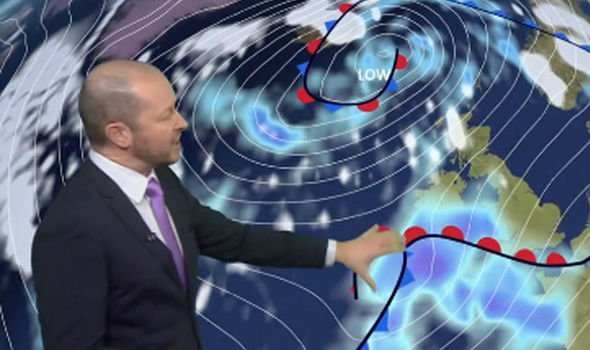 Ms Kirkwood warned the “severe gales” could cause major disruption to commuters later in the morning after a calm and dry start of the day.

“Expect some disruption to your travel arrangements, especially later on this morning and through the rest of the day. 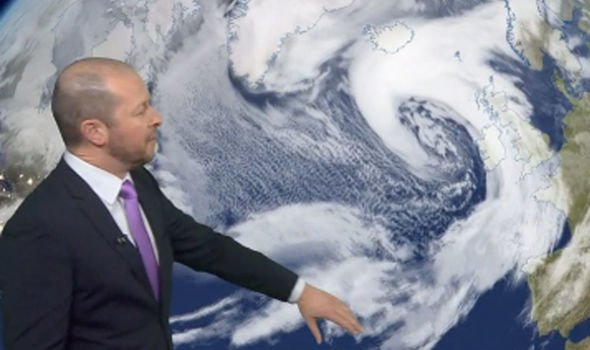 “To start with, it’s fairly quiet, when we wake up we will have some sunshine, just some showers around but this deep area of low pressure is Storm Brendan.

“This chart runs into 4 o’clock this afternoon.

“Look at the rain arrive, it will be quite heavy and persistent and look at the isobars, right across the UK but the strongest winds are going to be in the west, especially so with exposure.”