Singapore: Afghan refugees in Jakarta defied lockdown restrictions and fought with police as they protested against falling humanitarian intakes by Australia and other countries.

Defying a ban on public gatherings in the Indonesian capital imposed due to the COVID-19 outbreak, more than 1000 refugees from Afghanistan were met by police, some in full PPE kit, who warned that troops stood by ready to disperse the crowds by force.

“We ask [you to disperse) as we are still under the social restriction conditions. This is the second warning. The troops are ready,” an officer told the protesters according to local media.

The traditional staging point for asylum seekers bidding to travel to Australia by boat, Indonesia has more than 14,000 registered refugees, over half of them ethnic Hazara from Afghanistan, who have long been persecuted by the Taliban.

While the attention of Western powers is on the rescue effort in Kabul, many refugees who have fled the war-torn nation over the past decade remain in limbo in Indonesia, stranded with few rights for nearly a decade.

Such is their desperation, there were warnings last week that Afghan refugees to Australia’s north were considering getting on boats despite the Australian government’s policy of turning them around under Operation Sovereign Borders. 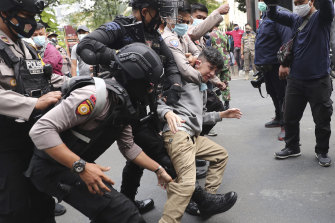 Police officers scuffle with an Afghan refugee during a rally outside the building that houses the UNHCR representative office in Jakarta, Indonesia, on Tuesday, August 24, 2021. Credit:AP

The UNHCR has forecast that few will ever be resettled as humanitarian intakes from third countries drop.

“We are fully aware of the current COVID situation in Indonesia and that the government has imposed a lockdown which doesn’t allow any kind of gathering or protest but we are helpless and don’t have any other solution than to raise our voices and tell the world about our problems and worries we have for our families, people and country,” said Hakmat, an Afghan Hazara refugee stuck in Jakarta since 2013 who did not want his surname published.

“We are holding this protest to put pressure on the UNHCR, Australian government and other countries that accept refugees from Indonesia to work on the resettlement process which has been prolonged for too long. Thousands of refugees have been waiting in limbo here in Indonesia for eight to 10 years to get resettled.”

Several protesters were taken away on Tuesday by police, which dispersed the crowd with trucks and motorcycles. 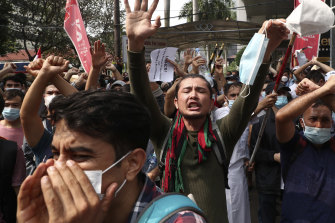 Indonesia takes in asylum seekers but as Jakarta is a non-signatory to the 1951 Refugee Convention and the 1967 Protocol, refugees don’t have the right to work and the physiological toll has led to a spate of suicides.

Australia, meanwhile, won’t accept any refugee who registered in Indonesia after July 1, 2014, an edict enforced once Canberra was determined to stop maritime arrivals, and its overall intake has been reduced from 18,750 places annually to 13,750.

Prime Minister Scott Morrison has said at least 3000 of those spots will be reserved for Afghan nations fleeing the new Taliban regime.

Those who have already escaped and remain in Indonesia, however, face a never-ending waiting game.

“We will continue to detect and intercept anyone who attempts an illegal boat voyage to Australia and return them to their country of departure or origin, where it is safe to do so.”

The ABF said last week the government had granted more than 8500 visas to Afghans under Australia’s humanitarian program since 2013, with Afghanistan in the top five countries of origin over the last five years for refugees settling in Australia.