Sudan’s transitional government and several rebel groups have signed a peace agreement aimed at resolving years of war in which hundreds of thousands of people died and millions displaced in different regions across the country.

Cheers rang out as representatives from the government and a coalition of armed groups called the Sudanese Revolutionary Front (SRF) signed the deal on Saturday, a year after the peace talks began, at a ceremony in Juba, the capital of neighbouring South Sudan.

Guarantors of the deal from Chad, Qatar, Egypt, the African Union, European Union and United Nations also put their names to the agreement.

“Today we have reached a peace agreement. We are happy. We have finished the mission,” Tut Gatluak, head of the South Sudanese mediating team said, shortly before the signing of the deal that happened a year after the peace talks began.

The peace-building process faces various challenges and pitfalls that we can overcome through concerted efforts and joint action.

Entertainers from South Sudan and Sudan performed for the guests, while members of the rebel groups from Darfur, South Kordofan and the Blue Nile marched, singing songs of joy and carrying banners bearing the images of their party leaders. 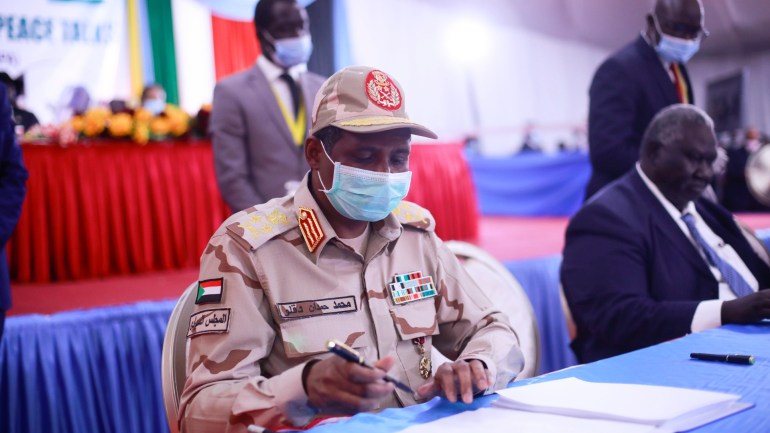 Al Jazeera’s Hiba Morgan, reporting from Sudan’s capital, Khartoum, said that while the document signed in Juba has been called “the final agreement”, the absence of the two key groups means that the deal was incomplete.

Jonas Horner, a senior Sudan analyst at the International Crisis Group think-tank, told Al Jazeera the SLM and SPLM-N “are the only armed groups in Sudan with meaningful military capacity and who represent significant constituencies”.

Last month, al-Hilu struck a separate deal with the government, agreeing to a truce until Sudan’s constitution is changed to separate religion and government.

Al-Hilu has called for a secular state with no role for religion in lawmaking, the disbanding of former President Omar al-Bashir’s militias and the revamping of the country’s military. The group has said if its demands are not met, it would call for self-determination in areas it controls in the Blue Nile and South Kordofan provinces.

Ending Sudan’s internal conflicts has been a top priority of the power-sharing government in power since last year’s military overthrow of al-Bashir amid a popular pro-democracy uprising.

The deal sets out terms to integrate rebels into the security forces, be politically represented and have economic and land rights. A new fund will pay $750m a year for 10 years to the impoverished southern and western regions and the chance of return for displaced people is also guaranteed.

In a statement upon his arrival, Hamdok said that “peace will open broad horizons for development, progress and prosperity”.

However, he conceded that the future will not be easy.

“The peace-building process faces various challenges and pitfalls that we can overcome through concerted efforts and joint action.”

Sudan has been torn by multiple conflicts between the Arab-dominated government that was led by al-Bashir for three decades and rebels drawn from non-Arab ethnic groups in its far-flung regions.

In Sudan’s vast rural areas, settled ethnic minority farmers have frequently competed for scarce resources with Arab herders, who have often been backed by Khartoum.

Tensions have been heightened by economic hardship, especially after the 2011 secession of South Sudan which deprived the north of three-quarters of its oil reserves.

Multiple civil wars have raged since independence in 1956, including the 1983-2005 war that led to the secession of the south.

The devastating war in Darfur from 2003 left at least 300,000 people dead and 2.5 million displaced in its early years, according to the United Nations.